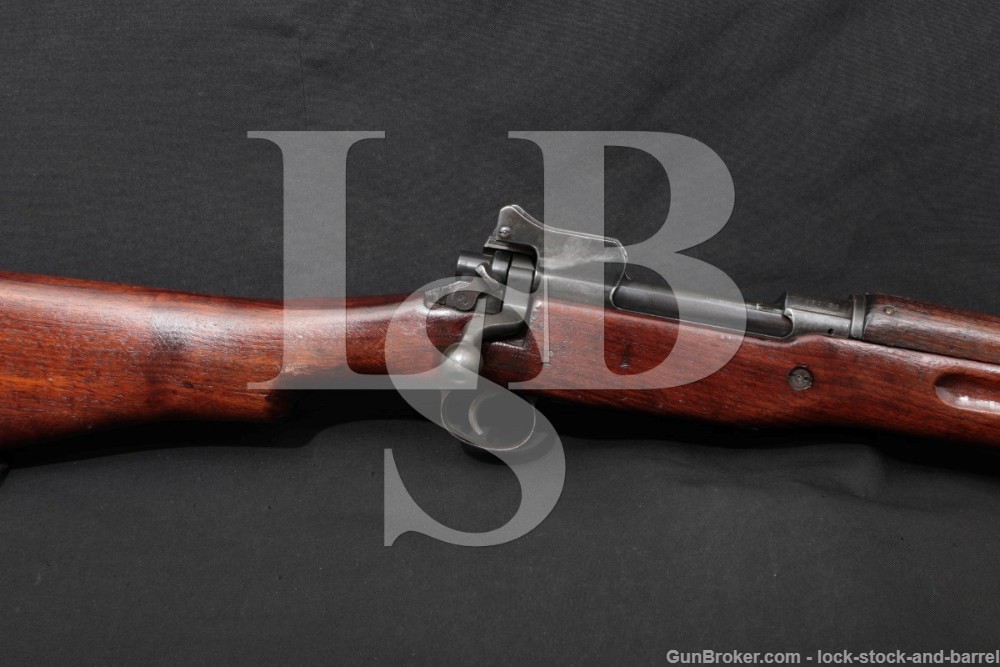 Markings: There is no visible import mark. The front of the Eddystone barrel is marked “E / flaming bomb / 11-18”. The chamber ring is marked “U.S. / MODEL OF 1917 / EDDYSTONE / 1380139. The left side of the receiver and the top of the bolt handle are both stamped with an Ordnance Department “flaming bomb” proof. The top left of the receiver (twice), top of the buttplate (faded), safety (twice), bottom of the cocking piece, and bottom of the grip are each marked with an “eagle head” inspection stamp. The top & bottom of the bolt handle, right rear of the bolt assembly, safety, rear of the handguard (at the receiver), and bottom of the rear sight are each marked “E” for Eddystone. The top of the front sight is marked “.075”. The left side of the grip is marked with a “rectangle” containing “3 GM-K”. This marking is not in our reference material but several online sources list it as a M1917 stock “clean & repair” cartouche.

Sights / Optics: The front sight is a bladed post set between two protective ears. The rear sight is an aperture set between 2 large protective wings. When flipped up it becomes a sight ladder that uses a sliding aperture. The ladder is marked from “2-16”.

Stock Configuration & Condition: The hardwood stock has a straight grip, cutout for the bolt handle & safety, finger grooves, nosecap, stacking loop, two sling loops, barrel band, through bolt, reinforcing pin, and a metal buttplate with a hinged door for storage. The buttplate shows scrapes, scratches, thinning and discoloration from oxidation. The refinished nosecap & barrel band show scrapes. The top rear of the handguard is missing some surface wood next to the receiver. The wood shows several scrapes, scratches & compression marks. Many of these marks have damaged portions of the surface wood. Most of these marks have been oiled over. The LOP measures 13 ½ inches from the front of the trigger to the back of the buttplate. The stock rates in about Very Good Plus overall condition.

Bore Condition: The bore is dark. The rifling is deep with small areas of erosion dulling some of the edges. The rifling is less pronounced at the muzzle. There is erosion present, heavier in the grooves. The bore shows an M.E. of 1.

Overall Condition: This rifle retains about 95% of its metal finish as refinished. Scratches and small areas of oxidation show through the new finish. The metal shows scrapes & scratches. The front of the barrel & front sight show some discoloration. The sight wings show some thinning. The screw heads show use. The main markings are deep. Some of the small stampings are faded. Overall, this rifle rates in about Very Good Plus condition as refinished.