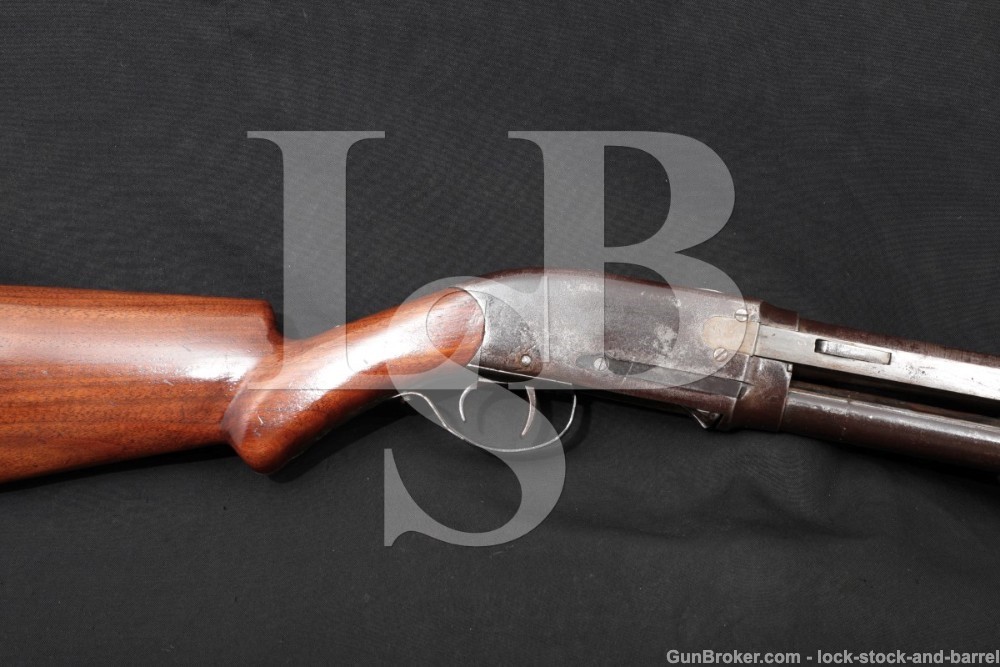 Caliber: 12 Gauge 2 1/2″. Note: This shotgun was developed during black powder cartridge times and use of modern ammo should be discouraged.

Sights / Optics: The gun is mounted with a front bead front bead and the top of the receiver is grooved to provide a sighting plane.

Stock Configuration & Condition: The stocks are two-piece walnut with Model 1900-style grooved slide handle, pistol grip, straight comb and checkered black hard rubber buttplate. The slide handle has a notable gouge in the top-left at the rear and a few other scattered light marks. The buttstock has scattered nicks, scuffs and scratches. There some minor cracks around the front edge of the slide handle. There is a repaired chip-loss at the bottom-left of the grip in the front. The LOP measures 13 3/8″ from the front of the trigger to the back of the buttplate. The plate has light wear at the heel and toe with well defined checkering. Overall, the stocks are in about Good-plus condition as Antique, not original to the gun and refinished.

Bore Condition: The bore is gray. There is light to moderate erosion throughout the bore and some light pitting. There are a few scattered minor dents, barely visible in the bore.

Overall Condition: This gun retains about 0% of its metal finish. The barrel has a dark patina with wear in some areas exposing the damascus pattern. The action shows operational wear. The receiver has a light-moderate patina with edges worn to white, wear around the markings, and scattered light scratches. The Screw heads range from sharp to slightly disfigured with useable slots. The markings are clear. Overall, this gun rates in about Good-plus condition as Antique.

Mechanics: The action functions correctly. We have not test fired this shotgun. As with all used firearms, a thorough cleaning may be necessary to meet your maintenance standards.

Our Assessment: Most famous for the Spencer Carbine, one of the few repeating rifles to serve in the US Civil War, Christopher Spencer was a prolific inventor and designer producing a sewing machine, horseless carriage and the first pump-action shotgun in 1884. Minor tweaks produced models 1886 and 1887, with both models being tested and approved byt the Ordnance Department and a total of 354 shotguns purchased by them for guarding prisoners. However, this did not spur commercial sales and in 1890, the tools and machinery were purchased by Francis Bannerman who continued to produced and develop the design, bringing out models 1890, 1894, 1896 and 1900. The model 1890 was produced for three years until being replaced by the 1894. Winchester introduced their 1893 during production of the 1890 and was promptly sued by Bannerman for patent violation, but Winchester was able to successfully fight the suit and continue producing pump-action repeating shotguns. By 1900, manufacturing behemoth Winchester had nearly captured the pump shotgun market with the J.M. Browning designed model 1897 and Bannerman’s sales were never strong. In 1902, Bannerman decided to cease production of shotguns citing not his poor sales, but rather his desire to focus efforts on the military surplus business “which was always more profitable and more to our liking, and on which there is no patent”. We suppose we cannot disagree with him on that, yet Bannerman produced, based on the design of others including Spencer, a very interesting shotgun with a top-ejection system with the firing pin mounted in the lifter rather than on a separate bolt as we are now used to seeing. This shotgun is in about Good-plus condition. This shotgun has a very interesting history, tied back to the very first pump-action shotgun produced. Please see our photos and good luck!