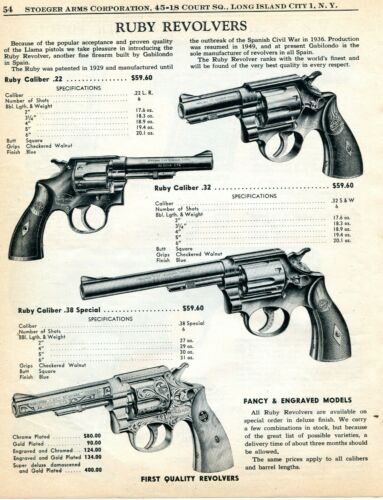 Ah, the warm, sunny land of Spain.  Straddling history, home of adventurers, heroes and legends, Spain has cast a mighty shadow over western civilization, throughout recorded time.  Long ago, the Romans feared the long, deadly swords of the Iberian Peninsula; an age later, the Moors combined their Damascus sword making skills with fine Spanish metal, and the results were the most sought after edged blades to be found on the continent.  Many of the greatest battles of the middle ages were fought on Spanish soil, so it can be no surprise that the finest swords on earth were made of Toledo steel.

From Astato Zhuk, with Aranzabal , Aguirrey y Cia, Aya, Brichet, Eibar, Erasti, Gangarosa, Garate ,  Orbea_Hermanos,  Tracoala, Unceta_Esperanze_Y_Cie , and an absolute alphabet soup of others along the way, the early 20th century in Spainwas a bazaar of bizarre handguns and long arms – but especially handguns!  These owed much to many other long-established and worthwhile designs, but paid little in royalties or compensation to the original patent holders.

Spanish patent laws were pretty much non-existent, and so the cheerful pirates in the Eibar Valley of the Basque region of Spain got to work, hammering, drilling, and filing on various firearms, which, thanks to generations Spanish tradition of working metal, looked great on the outside.  The complex insides were often another matter. Deep bluing on external surfaces belied rough,  and sometimes even comical internals, with hand fitting, suspect materials, and dubious assembly. 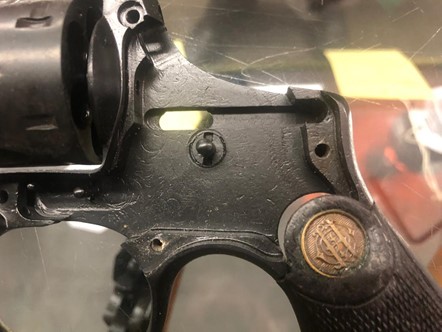 What might have been an interesting aside became writ large during the First World War.  Spain sat this one out, while France, hard pressed, and desperate for firearms, reached across the Pyrenees, and  contracted with a little known gunmaker to begin producing handguns for their military. A copy of the 1903 Colt semi-auto in .32 ACP was chosen.

At the time when they received the initial contract, the Spanish company Gabilondo y Urresti factory employed less than ten workers. When the initial order for 10,000 pistols – per month – came in, with a nod and a handshake, the company eagerly accepted the cash.  Overwhelmed, however, the tiny company began farming out work to every supplier in the valley.  When the demand increased to 30,000 per month, GyU agreed once again, and pretty soon, just about every kitchen table in the valley was hammering out imitations of the Ruby pistol.  Before the smoke and carnage of the First World War had cleared, nearly 50 companies were producing some version of this pistol.  The result was the Ruby pistol, and by the time war had ground to an end, nearly a million of these little 9 shot semi automatics, were produced.

And of these, few magazines and even fewer parts were interchangeable.  Can you imagine the logistics nightmare this created for the overtaxed French supply trains?

Oh, the humanity; and woe betide the unfortunate poilu who was issued this gun.

Quality control was, to be polite, wartime expedient, at best.  While the guns looked fine externally, and might even be counted on to function for the first several rounds, often, a lack of hardened internals and suspect metallurgy resulted in short lifespans for many of these guns. And, presumably, their users.

But Europe was in the midst of the War To End All Wars. Desperate times required desperate measures; soon the British were banging on the supposedly neutral Spanish door, and a stream of weapons of various sorts made their way across the Channel.  Foremost among these was the Trocaola revolver, based on the 1899 Smith & Wesson M&P design.  The Brits demanded a more powerful fighting handgun than the French, however. Metallurgy that could scarcely handle the chamber pressures of the anemic .32 French cartridge was soon overpowered by the .455 British chambering, and the Trocaolas were quickly relegated to behind the lines or training duties.

The end of the war brought about social unrest in many areas, especially in South America, and once again, Spain was there to fill the need for weaponry.  Undercutting Colt and Smith & Wesson in price, they quickly established a foothold in the Americas.

It was inevitable that some of these would make their way up north, where the attractive price and attractive external appearance of these knock offs made them fixtures in discount catalogs and hardware stores through the U.S.  The barrels and top straps of these were often imaginatively marked in an attempt to gull the unwary; names like “Smill & Welson, Sprangfeld Mus, E.U.A.” or this lovely model, which points out that, “Smith & Wesson’s Metallic Cartridges are to be uset for our model of revolver.”

Eventually, though, American patent and copyright laws caught up with these fakes. In 1922, following a US court hearing, the Federal Trade Commission excluded 22 brands of Spanish revolvers from United States import.

In 1939, after a bloody civil war, Generalissimo Francisco Franco seized control of Spain, and the business of making bootleg firearms was quickly squelched.

But the firearms tradition continued through makers such as Astra and Llama.  The Astra 400 and 600 blowback pistols were fixtures in the Spanish military, throughout Latin America, and were even pressed into service during the Second World War by the Wehrmacht.  Their ability to chamber, fire, and even eject just about any 9mm cartridge overshadowed their size, weight, clumsy handling, and imposing recoil spring. The Llama marque reflected a desire by Gabilondo for a clean break with the Ruby brand, given the unfortunate reputation that wartime Ruby pistols acquired. The most famous Llama pistol was a knockoff of the 1911, and the later Astra A-80 was decent and well manufactured pistol.  And, note that the shotguns of Aya, Garbi, Arrizabalaga, Grulla, and others are fine, handcrafted, kit.

Eventually, however, not unlike the desultory Spanish regard for copyrights and patents, Turkish manufacturers , often using existing designs and with discount labor, have driven most of the once proud Spanish firearms from the continent, and into the pages of history.