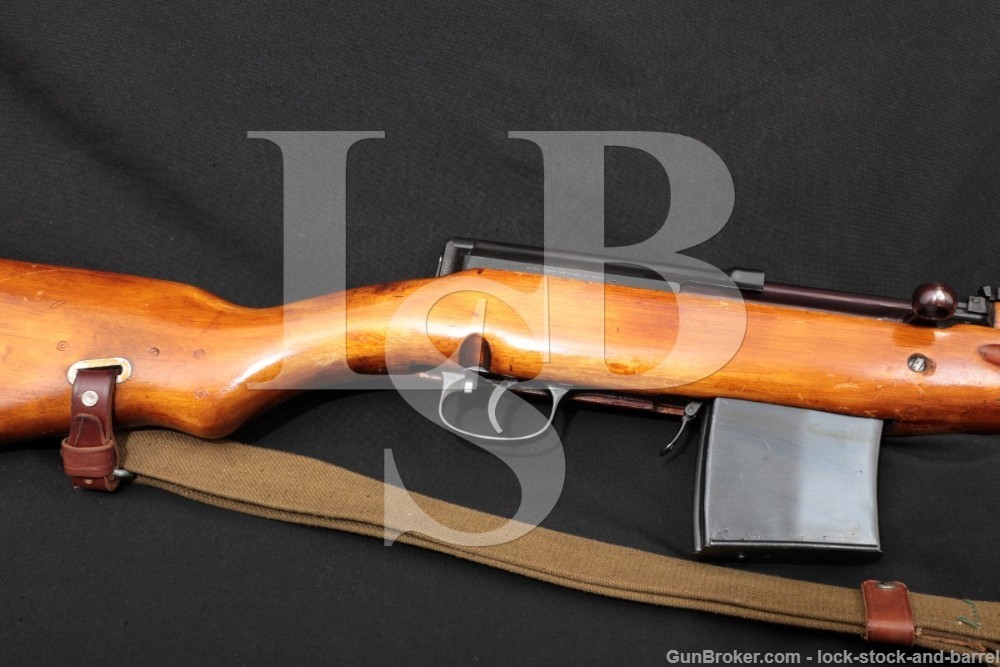 Sights / Optics: The front sight is a hooded post. The rear sight is a “U” notch blade assembly attached to a sliding escalator that is marked from “1 – 15”.

Stock Configuration & Condition: The two piece wood stock has a pistol grip, finger grooves, ventilated handguard, ventilated metal nose caps with sling loop, through bolt, rear sling eyelet, and a metal buttplate. The butplate shows scrapes. The wood shows several scrapes & scratches. Many of these marks have damaged portions of the finish. The LOP measures 13 ¼ inches from the front of the trigger to the back of the buttplate. The stock rates in about Very Good Plus overall condition.

Overall Condition: This rifle retains about 96% of its metal finish as refinished. Surface erosion and scratches show through the new finish. The bolt body and handle have a plum color to them. The metal shows scrapes and small scratches. Most of the markings are deep. Overall, this rifle rates in about Very Good Plus condition as refinished.

Box, Paperwork & Accessories: The rifle comes with a refinished 10 round magazine. It has scratches and surface erosion showing through the new finish. The magazine shows scrapes and scratches. It is in about Very Good Plus condition as refinished. The rifle has a green canvas sling attached by leather keepers. It shows light discoloration on the canvas. The metal shows oxidation. Overall the sling is in about Very Good Plus to Fine condition.