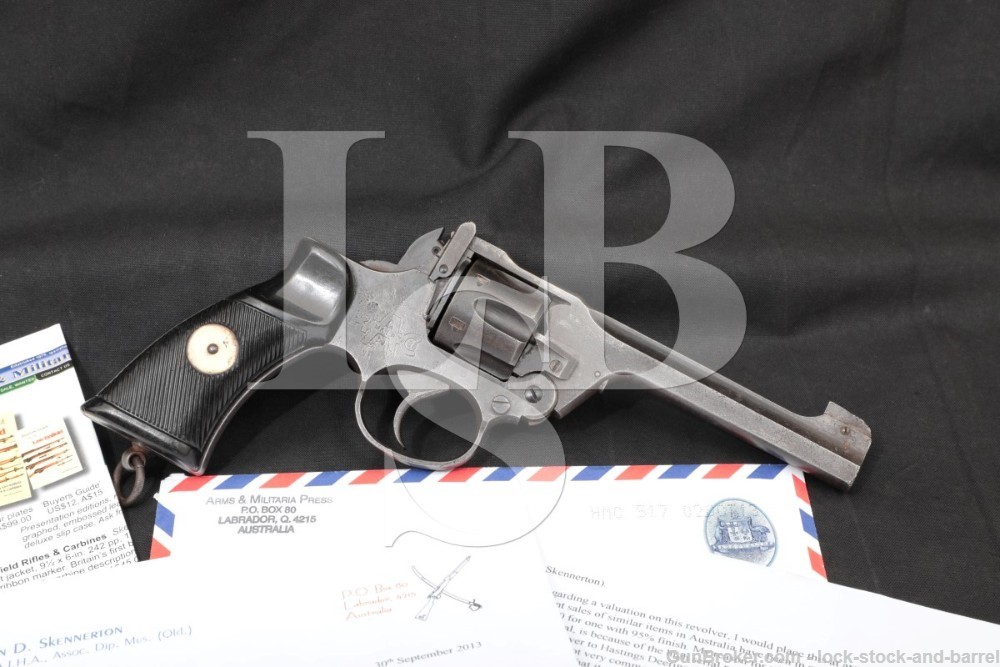 Stock Configuration & Condition: The grips are serrated black bakelite with smooth thumb-rests at the top of each grip. There is a round brass marking disk in the middle of the right grip. The grips have light handling wear with some scattered light nicks, scuffs and scratches. There are no chips or cracks. The serrations are well defined. Overall, the grips are in about Very Good condition.

Overall Condition: This handgun retains about 30% of its metal finish. Remaining finish is scattered and typically in protected areas such as behind the recoil shield, around the barrel latch, the side faces of the hammer, the sides of the cylinder retaining cam and in the flutes of the cylinder, with some other scattered spots of finish. The remainder shows scattered surface erosion and pitting. The grip areas are mostly worn to white. There are some scattered nicks, scuffs and scratches. The action shows operational wear. The screw heads range from sharp to disfigured with useable slots. The markings are generally clear, the logo on the frame is slightly obscured by pitting. Overall, this revolver is in about Good condition.

Mechanics: The action functions correctly. The barrel lockup is solid and the cylinder lockup has no play on each chamber when the trigger is depressed.  The ejector works correctly. The double action trigger pull is smooth. We did not fire this handgun. As with all used firearms, a thorough cleaning may be necessary to meet your maintenance standards.

Box, Paperwork & Accessories: This revolver comes with a valuation letter from Ian D. Skennerton, co-author of the book “.380 Enfield No. 2 Revolver” which describes some of the history, features and marking of this revolver. Mr. Skennerton’s letter indicates that he evaluated the revolver based on photographs rather than physical inspection, and this accounts for some of the differences in our evaluation and his. Photographs may have appeared to show more finish than we found on physical inspection. Additionally, he has identified the model as a MK I**, though the second “*” appears to be a spot of pitting as the hammer does have a mechanical safety, it cannot be pushed forward enough for the firing pin to come through the recoil shield without the trigger depressed.

Our Assessment: The Enfield No. 2 revolver was in service with the British Empire from the 1930s through the 1960s. Following the Great War, it was decided that a smaller, lighter sidearm should be produced and issued. The result was the No. 2, chambered for the .38/200 cartridge (essentially a .38 S&W), a single and double action revolver produced by RSAF Enfield. The later No.2 MkI* would delete the hammer spur and was double action only. During WWII, as with many things, demand outstripped production capacity of this single manufacturer, and other makers came on line to increase production. The Sydney, Australia based Howard Auto Cultivators factory was one, but also produced the fewest of these revolvers, only 355! Late in production, some parts which were produced to be issued as spares were used for production revolvers, even later assembly and finish was performed by Hastings Deering who continued to use the spares inventory. This example, serial A301, is from this later production and may have been assembled by Deering. It has matching serial-numbered parts and proper markings, making it quite the rare find for the Enfield collector. Much of the above information was helpfully provided by Ian Skennerton, a subject matter expert on these revolvers, in an included valuation letter from his inspection of photographs of the gun. This very rare variant of the Enfield No. 2 revolver will make a prized addition to a WWII, British sidearm, or Enfield specific collection. Please see our photos and good luck!