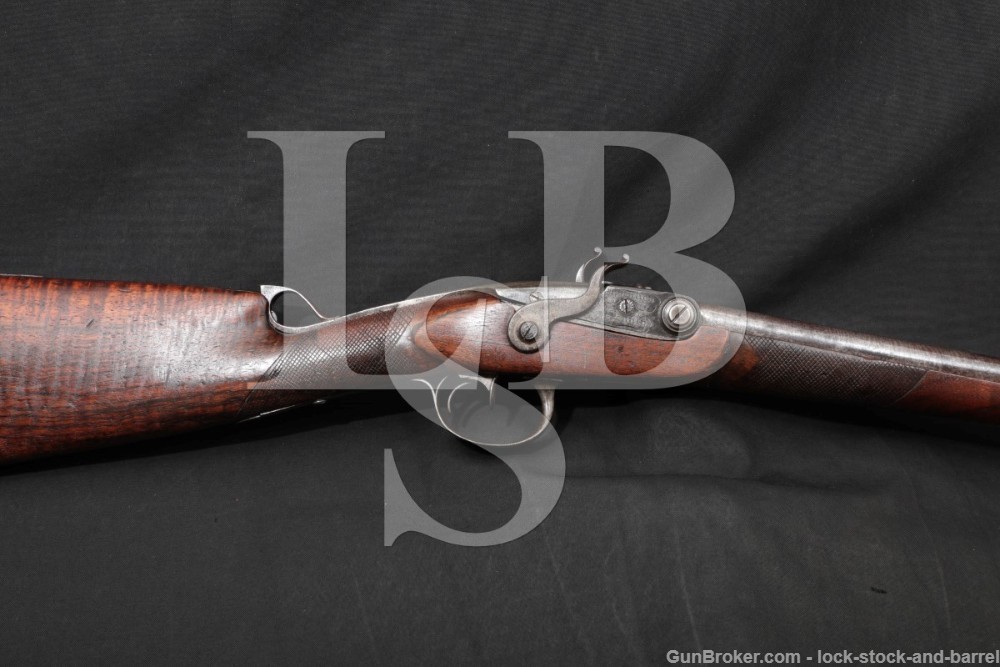 Sights / Optics: There is a semi-bead, semi-blade installed on the rib at the muzzles. The rib and the top-front of the breech-block are dished to provide a sighting plane.

Stock Configuration & Condition: The stock is a one-piece checkered walnut half-stock with straight grip, straight comb, hinged smooth steel buttplate with latch at the toe and a screw threaded to the belly which we believe to be for a sling stud as there is a sling eyelet mounted to the bottom of the rib in front of the forend. The buttplate’s latch assembly is loose and does not latch properly, leaving the buttplate to swing freely. There are two repaired breaks in the stock, one at the front of the wrist and the other at the rear of the forend across the front of the trigger plate. There are small pin-heads visible where the repairs were performed. There are scattered nicks, dings, bruises, scuffs and scratches. There is a fill-repair on the right of the comb below the tang of the buttplate assembly. The checkering is smooth with well defined lines. The LOP measures 14″ and 13″ from the fronts of the triggers to the back of the buttplate. The plate has a mottled, moderate-dark patina. Overall, the stock is in about Fair-Good condition as repaired Antique.

Bore Condition: The bores are gray. There is scattered erosion and pitting, more in the left bore than the right.

Overall Condition: This shotgun retains about 20% of its metal finish. The gold embellishments show scattered loss, and there was likely some gold which has worn completely. The barrels have scattered areas which have visible damascus patterning, interrupted by patina, some surface oxidation and erosion. Similarly, the action assembly has scattered discoloration from oxidation and some light erosion. The barrels have a few scattered minor dents with a more notable dent on the top of the left barrel about 3″ from the muzzle. The action shows operational wear. The screw heads range from sharp to disfigured with useable slots. The markings range from clear to worn, but legible. Overall, this shotgun is in about Fair-Good condition as Antique (see Mechanics).

Mechanics: The right cocking arm falls further forward than the left. Each has a notch that it will catch on before reaching full-cock, but the right cocking arm doesn’t provide clearance for the breech-block when at the half-cock notch, the left does. When at full cock, the left cocking arm sits further back than the right. The front trigger is noticeably shorter and of a different design than the rear, possibly one or more is a replacement. Otherwise, the action functions properly. The tail of the breech block can be lifted up to present the breech. Cartridges are inserted and the action then closed. The cocking arms cock internal hammers which strike firing pins mounted on the inside of the breech-block assembly. We have not fired this shotgun. As with all previously owned firearms, a thorough cleaning may be necessary to meet your maintenance standards.

Our Assessment: Jean Samuel Pauly, born in Switzerland as Samuel Johannes Pauli and even later in his life known as Samuel John Pauly, the inventor of this shotgun’s mechanism as well as the first self-contained cartridge, had a wonderfully interesting life. His interests ranged from architecture to airships, but perhaps his most advanced innovations were in firearms. In 1808, before Dreyse’s needle-fire, before Lefaucheux’s pinfire, Pauly designed a self-contained cartridge. In fact, both Dreyse and Lefaucheux apprenticed with Pauly in France. Casimir Lefaucheux would even end up taking ownership of Pauly’s French manufactory after Pauly had moved to England. While the concept seems quite ordinary to us today, Pauly designed a central-fire, self-contained cartridge and a mechanism for a breech-loading gun which could fire it in the time of the War of 1812! At the age of somewhere around two centuries, this gun is in better shape than most 200 year old sporting equipment and is a wonderful example of one of the most revolutionary advances in firearms design. It will make a great addition to any collection, but especially those who focus on the milestones of firearms design. Please see our photos and good luck!

CA Legal or CA Private Party Transferable: This Antique shotgun can be transferred/sold in California.