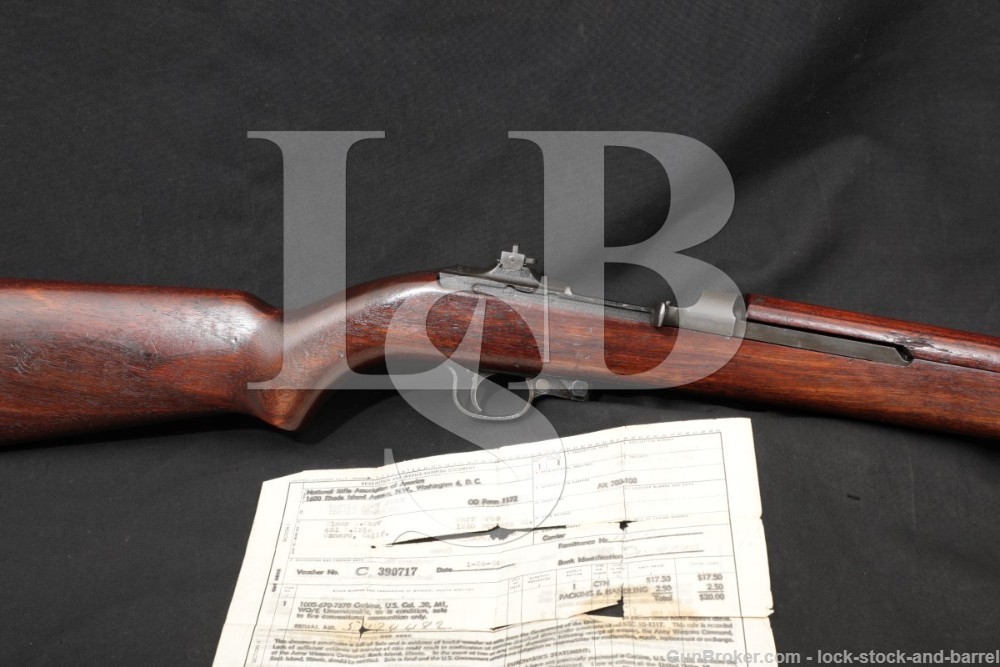 Sights / Optics: The front sight is a post set between two protective wings. The Type I rear sight is a flip up dual aperture assembly.

Stock Configuration & Condition: The hardwood stock has a pistol grip, Type II barrel band with sling loop, sling well, sling pass through, and a metal buttplate. The buttplate shows scrapes, small scratches, and oxidation; mostly on the edges. The wood shows several scrapes, scratches, and compression marks. Many have damaged small portions of the surface wood. Most of the marks have been oiled over. The LOP measures 13 ¼ inches from the front of the trigger to the back of the buttplate. The stock rates in about Very Good Plus overall condition.

Overall Condition: This rifle retains about 95% of its metal finish. The bottom of the trigger group has been treated with cold blue and shows discoloration from the cold blue. This area also shows scratches and thinning. The metal shows scrapes, small scratches and a few areas of discoloration. The right side of the receiver & bolt show some light thinning consistent with cycling. The markings are deep. Overall, this rifle rates in about Very Good Plus condition.

Box, Paperwork & Accessories: The rifle comes with its original purchase & shipping invoice from the National Rifle Association. It lists the rifle’s serial number and is dated “1-24-64”. The invoice lists the origination point as the “TOOELE ARMY DEPOT” in Utah. The invoice is torn at the creases and discolored. It is in about Fair condition.
This M1 Carbine was purchased through the Office of the Director of Civilian Marksmanship (DCM). In 1996 the DCM became the Civilian Marksmanship Program (CMP). Firearms purchases through the DCM were facilitated by the National Rifle Association (NRA). Technically DCM guns were purchased through the NRA which explains why the invoices marked  “NATIONAL RIFLE ASSOCIATION OF AMERICA” and not DCM.
There is no magazine.