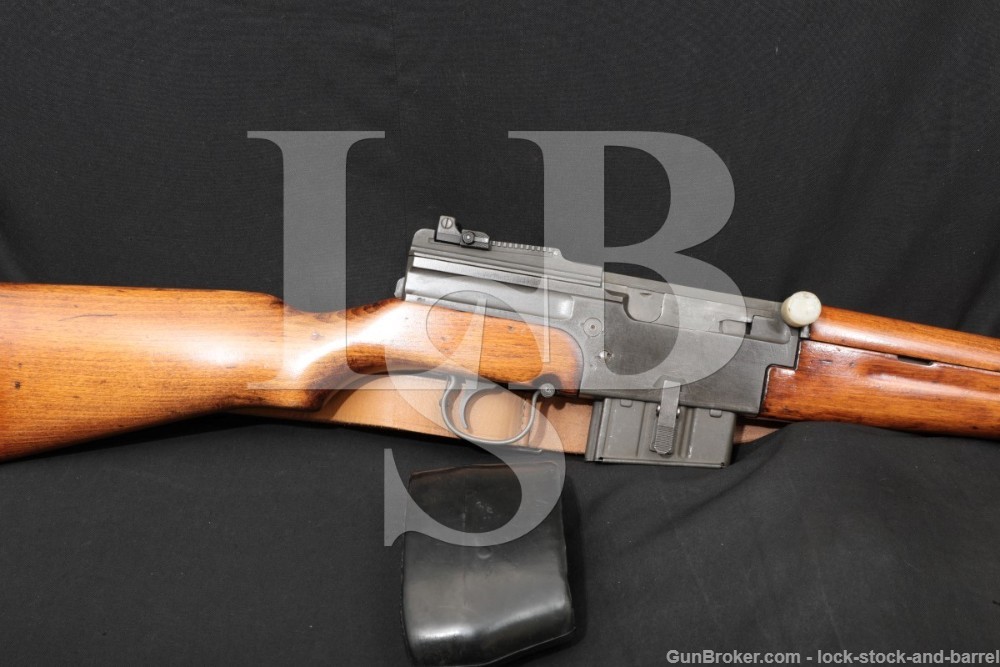 Markings: The import mark is in tiny text along the scope base rail on the left side of the receiver. It reads “7.5 FRANCE / C.A.I. ST ALB VT”. The left side of the receiver is marked with the serial number, “MAS MLE 1949-56 / CAL. 7,5” and with a boxed “P75”, signifying that the rifle was re-asrenaled in 1975. The rear of the top cover is marked with the serial number. The right side of the front sight base is marked “IMT”. The barrel is marked “41760”. The front of the barrel is marked from “10-19”. This was for the grenade launcher that has been removed. The top of the bolt is marked “FA”.  The rear of the recoil pad is marked “MAS / 1962 / 2”. The interior of the sling is stamped “R”, “M”, and with a circular French cartouche.

Sights / Optics: The front sight is an adjustable post set between 2 protective ears. The base of the post is marked “1 2 3 4” on the top. It can be rotated when the retaining pin is pushed down. The rear sight is an elevation adjustable escalator peep sight marked from “2-12”. A screw on the right side of the aperture housing can be turned to adjust the aperture for windage. The left side of the receiver has an integral scope base machined into it. The underside of the flip up grenade launcher sight is marked “100 / 75 / 50 / 120 A.P”.

Stock Configuration & Condition: The three piece hardwood stock has a pistol grip, finger grooves, barrel band with sling ring, sling well with sling bar and a metal buttplate. The refinished buttplate has small scratches and oxidation showing through the finish. It also shows scrapes & small scratches. The wood shows scrapes & scratches. Some have damaged small portions of the surface wood. Most of these marks have been finished over. The LOP measures 12 ¾ inches from the front of the trigger to the back of the buttplate. The stock rates in about Very Good Plus overall condition as refinished.

Bore Condition: The lands are grey, the grooves are dark, and the rifling is deep. There is erosion present; heavier in the grooves.

Overall Condition: This rifle retains about 90% of its metal finish as refinished. The metal shows scrapes & small scratches. The barrel, the area below the magazine catch, and the leading edges of the metal show thinning. The screw heads show use. The markings are deep. Overall, this rifle rates in about Very Good Plus condition as refinished.

Mechanics: The action functions correctly. We have not fired this rifle. As with all previously owned firearms, a thorough cleaning may be necessary to meet your maintenance standards.
When the gas cut-off is raised, it blocks the gas tube, making the action single-shot only. This was installed for use with the now missing grenade launcher. There are stripper clip slots milled into the front of the bolt for reloading the magazine without removing it. The left side of the receiver has a thumb cutout for loading stripper clips.

Our Assessment: This French MLE 1949-56 (M49/56) was made by Manufacture d’armes de Saint-Étienne (MAS) between 1958 and 1960. The rifle originally had a grenade launching attachment. This attachment has been removed because…California. The grenade launcher sight is still in place and the barrel is marked for use with the now missing grenade launcher. This MAS 49/56 has been refinished so it looks nice for its age. This French Military rifle should be lots of fun at the range and will add to your collection.