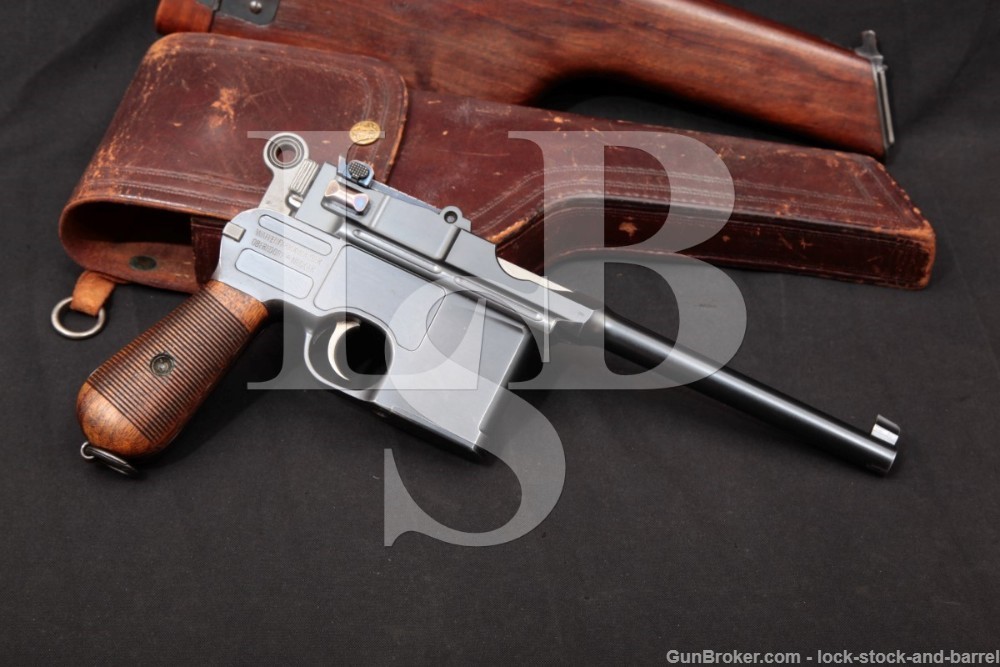 Stock Configuration & Condition: The grips are two-piece serrated walnut panels. The grips have minor handling wear with most marks around the lanyard ring. The serrations are well defined. There are no chips or cracks. Overall, the grips are in about Fine condition.

Overall Condition: This pistol retains about 95% of its metal finish. The finish is lightly thinning at some edges. There are some scattered minor marks, with a concentration on the left-front of the magazine. There is a patch of scraping on the bottom of the barrel at the front. The trigger, safety lever, extractor, rear sight slider and bolt stop have generally strong flame blue remaining with some thinning and handling wear. The backstrap has operational wear from the stock/holster’s mounting bracket. The parts left in the white, including bolt, hammer, lock frame, and other small parts, show some minor discoloration. The action shows light operational wear. The screw head is sharp. The markings are clear. Overall, this pistol is in about Fine condition.

Box, Paperwork & Accessories: This pistol comes with a walnut stock/holster with serial-matching mounting bracket, hinged lid and a leather cover with a snap-secured flap and leather hangers. The stock/holster has some scattered light nicks, scuffs and scratches in the wood, minor surface oxidation in the hinge assembly and wear from installation and removal on the mounting bracket. There are no chips or cracks. Overall, the stock/holster is in about Very Good-Fine condition. The leather cover has light-moderate wear with some surface loss, one of the hanger rings missing and intact stitching, in about Good condition.

Our Assessment: The Broomhandle Model 1896 Mauser is certainly an interesting looking firearm. Its features are very distinctive with its tangent rear sight, forward magazine, grasping tabs for the bolt and ring hammer. In addition to being used in the Great War, popularized in Soviet films as the iconic weapon of the Russian revolution and civil war, it was also used as a basis for futuristic weapons like the blaster used by Han Solo in Star Wars. This pistol was made around 1902-1903, produced before the introduction of the new safety hammer. Most C96 pistols of this era show quite a bit more wear, due to both their age and being produced during, and frequently used for, some of the most devastating conflicts of the 20th century. This example is in quite outstanding condition, especially compared to most other specimens, retaining about 95% of its metal finish, a nice bore, strong mechanics, and all-matching serial numbered parts including the stock/holster. You’ll be hard pressed to find a better example of this iconic pistol. Please see our photos and good luck!