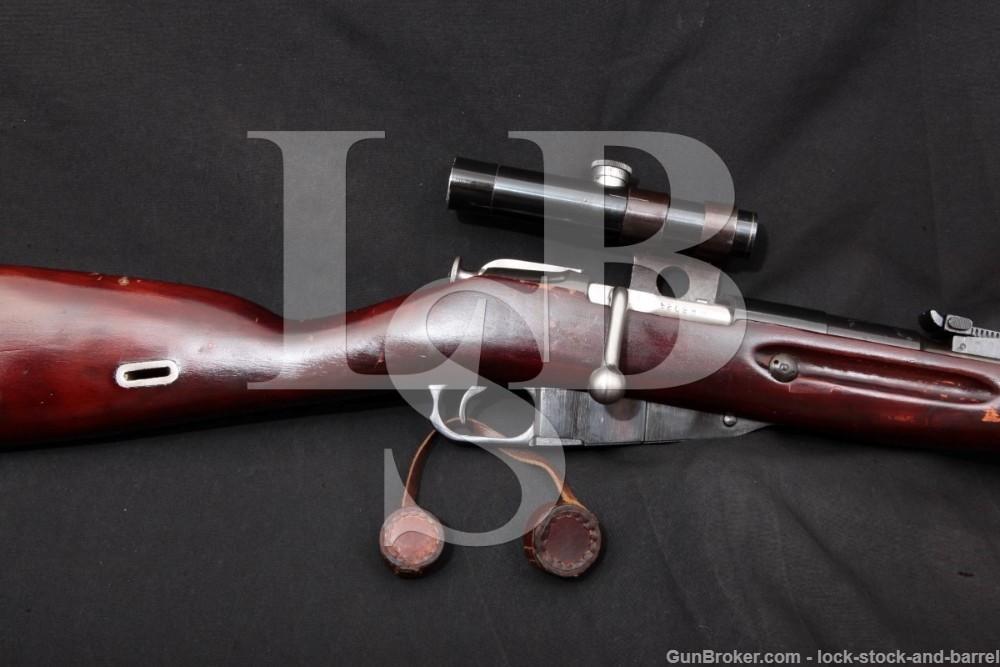 Markings: The import mark on the top of the receiver reads “R187101 ussr 7.62x54R / RGUNS carpentersville IL 91/30”. The top of the barrel shank is marked with the Soviet crest above “1944r / MH5026” above the arrow in a triangle (Izhevsk Arsenal symbol) and with various small Soviet stampings. The left side of the chamber is marked with a series of poorly struck and overstamped numbers, the top series appears to correspond to the scopes serial number. The bottom of the magazine is marked “MH5026” and the front tang has an Izhevsk symbol. The bolt is marked “MH5026”. The bolt body, barrel bands, and magazine are marked with small stampings that include the Izhevsk Arsenal symbol. The stock is stamped with a circled “52” on the comb.

The following is from page 148 of Terence Lapin’s book, The Mosin-Nagant Rifle 5th Edition: “NOTE: Scope mounts serial-numbered to the individual rifle are reputed to be Polish rather than Russian. On many post-World War II Polish sniper rifles the scope’s serial number was stamped on the left side of the receiver just above the stock; this was not done on Soviet rifles.”

Sights / Optics: The front sight is hooded post. The rear sight is a “U” notched sliding sight escalator marked from “1-20”.

The rifle comes with a two-piece side-mounted scope base. Part is secured to the side of the receiver with 2 screws and 2 pins. 2 capture screws are also installed to keep the main screws in place. 2 vertical rear screws and an oversized screw secure the detachable mount in place. 2 scope rings are attached to the mount. 3 top screws tighten the rings to the scope. The screws on the rings show light use. These screws show light to moderate use. The fixed 3.5 power scope has a heavy post reticle. The glass is clear and the adjustment knobs turn. The top knob is marked “0 1 3 4 5 6 7 8 9 10 11 12 13” and the side knob is marked “10 5 + 0 – 5 10”. The scope base and scope tube show scuffs, some nicks, a few fine scratches, and handling marks. The glass is clear. Overall the scope assembly is in about Very Good condition.

Stock Configuration & Condition: The two-piece hardwood stock has a straight grip, finger grooves, metal nose caps, cut out for the included cleaning rod, two barrel bands, two sling eyelets, through bolt, cut out for the scope base, and a metal buttplate. The stock has been refinished and there are numerous scattered scrapes that have taken of stock finish. There are some little impact marks, nicks, and some light draglines. The most noticeable and heaviest impact marks are on the comb. There is a small split in the wood grain at the very font of the handguard. The LOP measures approximately 13 1/2 inches from the front of the trigger to the back of the butt plate. The plate has some little nicks and scuffs plus some little pinpricks and streaks under the finish. The stock rates in about Very Good condition.

Bore Condition: The bore is dark and the rifling is rounded but strong. There is erosion throughout the bore, mainly in the grooves nestled up against the lands.

Box, Paperwork & Accessories: The rifle comes with a scope assembly; see above.

Our Assessment: This Mosin Nagant started life as a Model 91/30 at the Izhevsk Arsenal in 1944. This one is in 91/30 PU configuration and has a nice scope and turned down bolt. The scope measures 26.45 millimeters at the objective lens which leads us to believe it is legit, the reproductions use 1” tubes, or 24.5 millimeters and many have unsightly coatings on the lenses. The turned-down bolt looks very well done and it is known that the Soviets were not particular about what bolts were used, and this is way better than some of the other examples we have seen. The bolt, bottom metal, and buttplate are all matching. This one has some wear and erosion in the bore, but shooting it will be a blast nonetheless. These are tough rifles that were the workhorses of the Russian Army. You should be able to use this one at a distance. Please see our photos and good luck!

CA Legal or CA Private Party Transferable? (THIS SECTION DOES NOT APPLY TO OUT-OF-STATE RESIDENTS): This C&R rifle CAN be transferred in California. All C&R firearms must be transferred through your local dealer OR at our Simi Valley location; we cannot ship directly to a C&R holder in California. Out of state residents can disregard this section – your local laws apply.