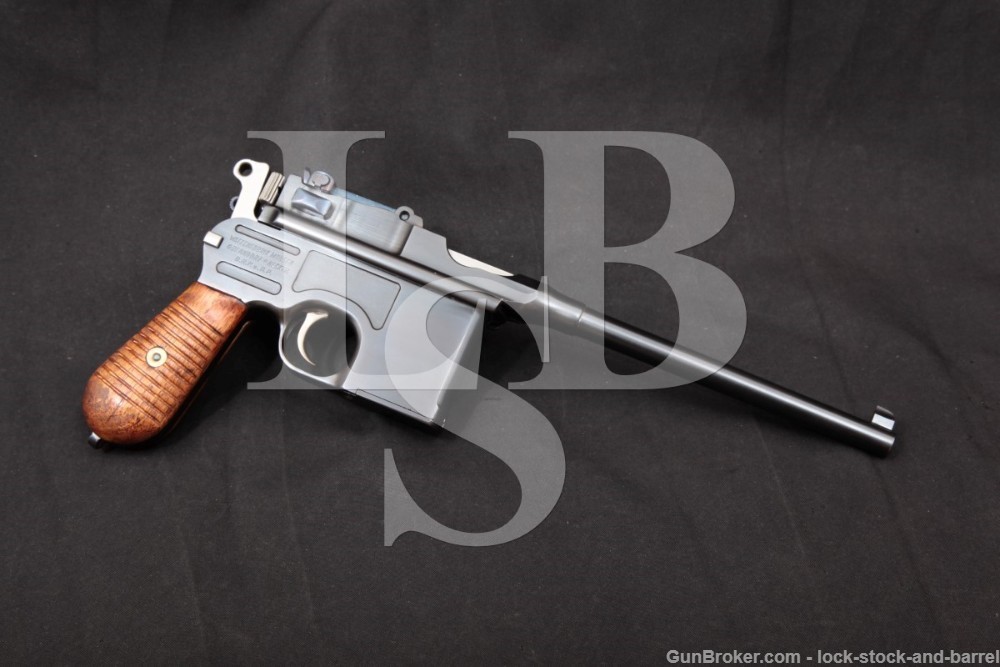 Markings: The left of the barrel extension is marked “884633”, the left shoulder is marked with a crowned “U”, the top of the chamber ring is marked “WAFFENFABRIK / MAUSER / OBERNDORF A/N”, the right shoulder has “SA” in box Finnish army marking. The bottom of the barrel extension has inspection marks. The inside of the magazine floorplate is marked “8846”. The top of the bolt has a crowned “U”. The right of the frame is marked “WAFFENFABRIK MAUSER / OBERNDORF A NECKAR / D.R.P.u.A.P.”, the left has a Mauser banner logo at the rear and a Finnish lion crest on the magazine. The rear of the hammer has an unfamiliar marking. Other than those described, there are no serialized parts that we could find.

Stock Configuration & Condition: The grips are two-piece serrated walnut panels. The grips have light handling wear with some scattered light nicks, scratches and spots of discoloration. There are no chips or cracks. The serrations are well defined. Overall, the grips are in about Very Good condition.

Overall Condition: This pistol retains about 97% of its current metal finish. The bright finish parts have infrequent minor discoloration from oxidation. The action has minor operational wear. There is faint surface erosion under the finish, most notable in the milled panels on the sides of the frame. The screw head is tool marked with a strong slot. The markings are clear. Overall, this pistol is in about Fine-plus condition as refinished.

Our Assessment: The Broomhandle Model 1896 Mauser is certainly an interesting looking firearm. Its features are very distinctive with its tangent rear sight, forward magazine, grasping tabs for the bolt and ring hammer. In addition to being used in the Great War, popularized in Soviet films as the iconic weapon of the Russian revolution and civil war, it was also used as a basis for futuristic weapons like the blaster used by Han Solo in Star Wars. This example is a Model 1930, also known as an M30, an improvement over the original C96 design which shares its basic operating mechanism and shape. Late features of this pistol include a lack of milled slots on the sides of the barrel extension at the frame rails, small ring hammer, late-design safety, and later marking patterns. Interestingly, this M30 has a Finnish crest on the side of the frame and a Finnish army inspection marking on the barrel extension. We were not able to find any information about Finnish contracts for this model in the 1930s, but it is entirely possible that it was purchased by or for a Finnish officer and carried as a personal sidearm. If that was the case, its condition is quite a surprise as that period saw Finland engage in some of the most destructive conflicts of its history. This will make a neat piece to add to a Mauser or Finnish firearms collection and its high condition and distinctive markings will make a great addition to any collection. Please see our photos and good luck!