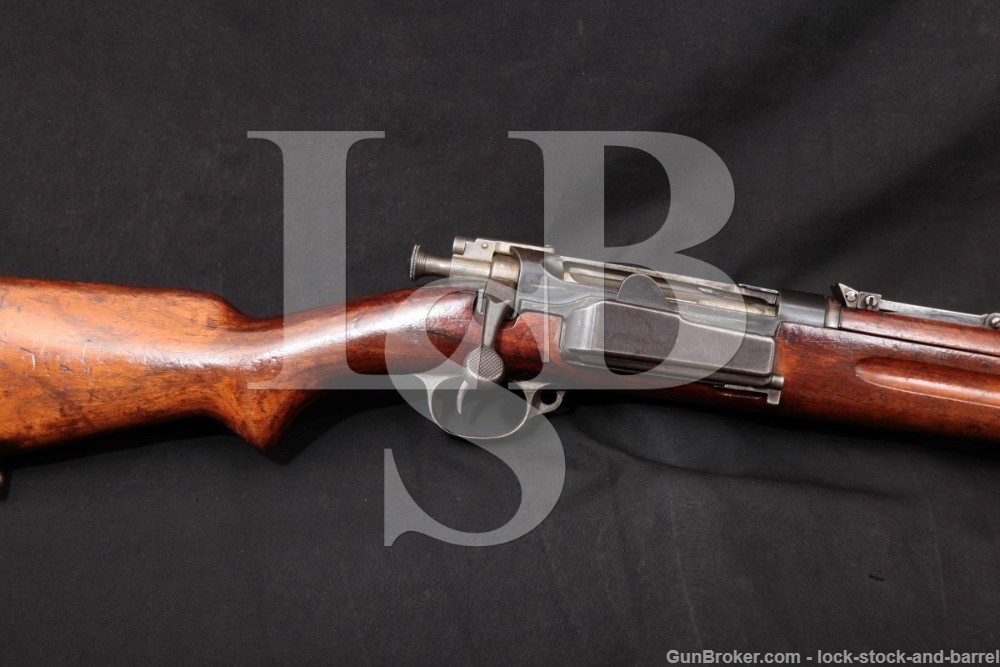 Sights / Optics: The front sight is an inverted “V” bladed post atop a small base. The rear sight is a “U” notched blade attached to a sliding escalator assembly. It is marked from “1 – 21” in increments of 2 and “2200” at the top. The rear sight blade is notched with a “U” on the bottom as well. The rear sight is equipped to flip completely over onto a waiting stud to serve as a short range battle sight.

Stock Configuration & Condition: The hardwood stock has a pistol grip, cut out for the bolt handle, scallop for the magazine cutoff, finger grooves, nosecap with bayonet lug, hole for the included cleaning rod, large reinforcing barrel band with sling point, barrel band with sling loop, sling point under the butt, reinforcing screw in the butt, and a metal buttplate. The buttplate shows scratches and surface erosion. The nosecap and large barrel band show scrapes, discoloration, and light surface erosion. The top of the handguard shows a hairline crack just ahead of the rear sight. The wood shows numerous scrapes, scratches, and compression marks. Several have damaged or removed small portions of surface wood. The LOP measures 13 ½ inches from the front of the trigger to the back of the buttplate. The stock rates in about Good to Very Good condition.

Bore Condition: The lands are grey, the grooves are dark, and the rifling is deep. There is erosion throughout, heavier in the grooves.

Overall Condition: This rifle retains about 92% of its metal finish, as refinished. Oxidation and surface erosion show through the new finish on the receiver & magazine. The receiver & magazine also scrapes & oxidation. The front of the barrel & trigger guard show scratches, thinning, discoloration from oxidation, and a small amount of light surface erosion. The bolt assembly shows discoloration from oxidation. The screw heads show heavy use. The markings are deep. Overall, this rifle rates in about Very Good condition as refinished.

Our Assessment: This Norwegian Krag-Jorgensen Model 1912 Carbine was made at the Kongsberg Arsenal back in 1915. It has matching numbers on several of the parts and the Kongsberg Arsenal “crowned K” is stamped deeply on the top of the receiver. It is in nice shape for a Military Rifle that is 105 years old. The Model 1912 Krag is chambered in 6.5x55mm which is a flat shooting Military cartridge. This Krag Carbine has a good bore and nice markings on the metal.
The Nazi’s destroyed many of the Norwegian Krags during their occupation of Norway so there aren’t that many of these Norwegian Krags around. For more information on the specific upgrades see pages 142 & 143 of Lt. Col. William S. Brophy’s Book, The Krag Rifle.