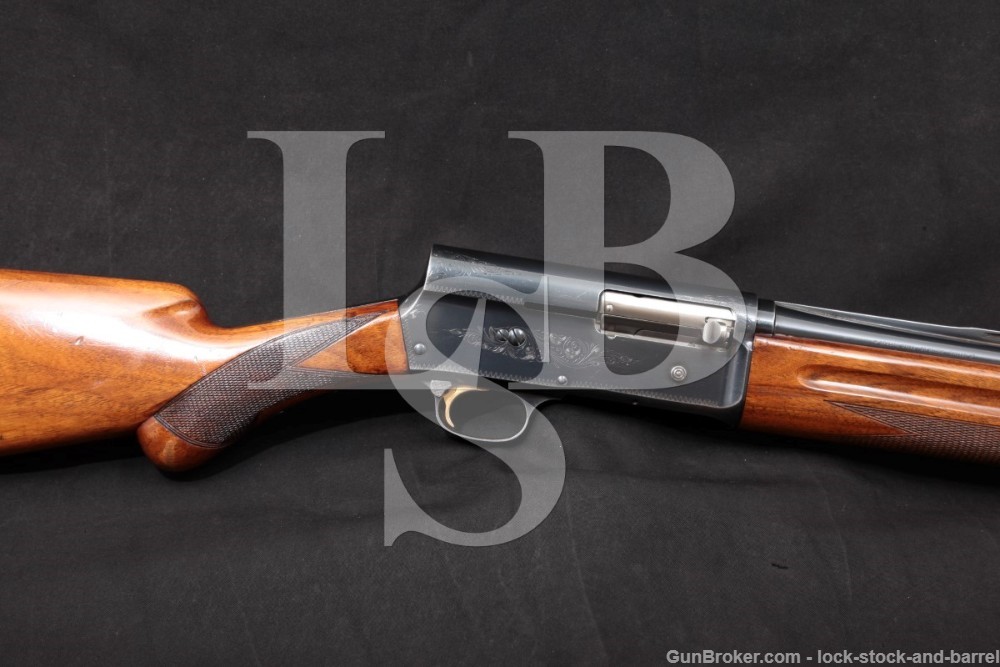 Stock Configuration & Condition: The stocks are two-piece checkered walnut with finger-grooved forend, round-bottom pistol grip, straight comb and ventilated orange rubber Pachmayr recoil pad mounted with a wood spacer. The stocks have scattered nicks, dings, bruises, scrapes and scratches with a couple of minor losses to the right of the bottom tang. There are a pair of more notable vertical bruises on the left of the stock above the belly and another in the belly a few inches in front of the toe. The finish shows crazing. The checkering is well defined. There are no cracks. The LOP measures 14″ to the back of the recoil pad, 13″ to the back of the wood spacer and 12 1/2″ to the back of the original stock wood. The pad is still fairly supple and shows scattered light wear. Overall, the stocks are in about Very Good condition.

Overall Condition: This shotgun retains about 85% of its metal finish. The finish is thinning at all edges. The barrel shows operational wear forward of the forend, some scattered light nicks and scratches, and a patch of scraping on the right just in front of the forend. The receiver has some scattered nicks, scuffs and scratches, more notable scrapes on the left at the bottom edge and the top edge of the flat, with handling wear at the bottom-front and in the top tang. The screw heads range from sharp to tool marked with strong slots. The markings are clear. Overall, this shotgun is in about Very Good condition.

Our Assessment: The Browning Automatic 5, most often referred to as Auto-5 or simply A-5, is a recoil-operated semi-automatic shotgun designed by John Browning. The Browning Auto-5 was the first mass-produced semi-automatic shotgun. Designed by John Browning in 1898 and patented in 1900, it was produced continually for almost 100 years by several makers with production ending in 1998. It features a distinctive high rear end, earning it the nickname “Humpback”. Browning presented his design to Winchester, where he had sold his rifle designs, but they refused his terms. He then went to Remington, but the president of the company died while he was waiting to offer them the gun. Browning then took the gun to FN in Europe and was so confident of his design that his first order was for 10,000 shotguns. The design was later licensed to Remington for their Model 11 and to Savage Arms for their Models 720 and 755. During WWII, production of the Auto-5 was moved to Remington alongside the Model 11 until FN could resume production after the war. This Auto-5 Magnum Twenty was built by FN in 1968 with Grade I engraving on the receiver. It is chambered for 20 GA. 3” shells, has a 25 1/2” Full Choke barrel and a full-length ventilated rib. This shotgun shows wear consistent with use in the field, but has a bright bore and strong mechanics. This is a well-made shotgun and a functioning piece of history. With its 3″ chamber, you’ll be able to take somewhat longer shots, but its shorter barrel will also be fast-handling for closer shots. Please see our photos and good luck!