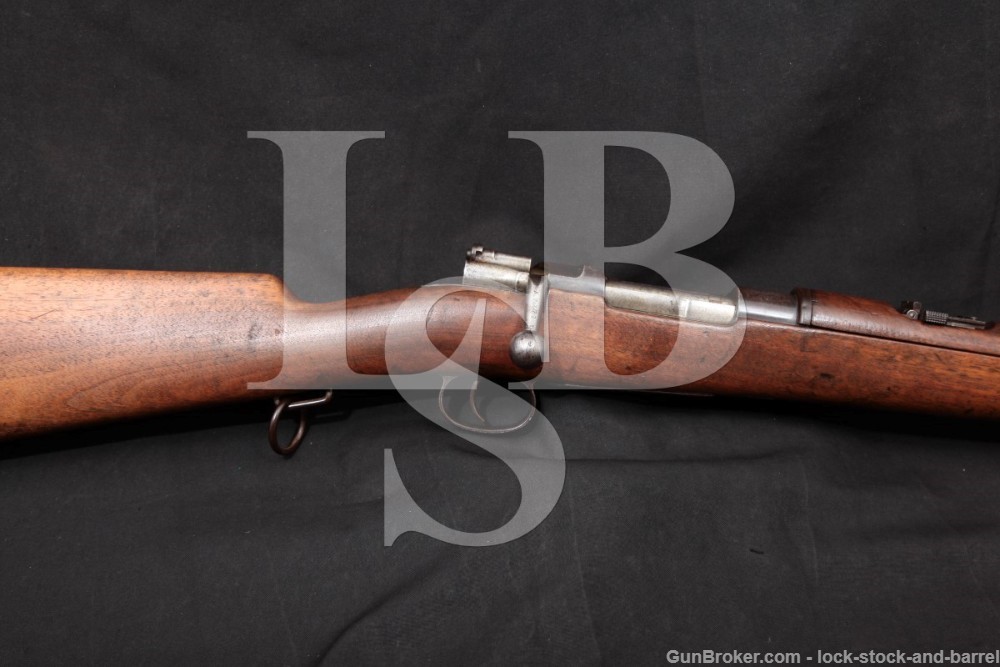 Make: Loewe & Company of Berlin, Germany. A contract Rifle for the Spanish.

Model: 1895 Carbine (page 311 of Joe Puleo’s book, Bolt Action Military Rifles of the World).
The Model 1895 Carbine was not approved by the Military until 1895. It is designated as a Model “1895” Carbine despite the earlier dates on the receiver.

Markings: There is no visible import mark. The top of the receiver is marked the “crowned” Spanish crest and “BERLIN 1894”. The left side of the receiver, the wood below it (faded), the top of the bolt handle, and the bottom metal are each marked with the serial number. The bottom metal and rear of the bolt assembly (twice) are marked with the last 2 digits of the serial number. Several of the metal parts are marked with small Spanish acceptance marks and inspection stamps. The left side of the buttstock is marked with a “crowned” Spanish crest that is dated “1894”.

Sights / Optics: The front sight is an inverted “V” post set between 2 protective ears. The rear sight is a “V” notched blade attached to a flip sight ladder assembly. The rear of the blade is marked “300”. When flipped up it uses a sliding sight ladder marked from “4-14”.

Stock Configuration & Condition:  The hardwood mannlicher stock has a straight grip, cutout for the bolt handle, metal nose cap with sight wings, barrel band with sling loop, sling bar & sling ring under the butt, and a metal buttplate. The buttplate shows scratches, discoloration from oxidation, and surface erosion. The nosecap & stock hardware show scrapes & discoloration from oxidation. The buttstock is lighter in color than the rest of the stock. The stock shows scrapes and scratches. Some have removed small portions of surface wood. The LOP measures 13 ? inches from the front of the trigger to the back of the buttplate. The stock rates in about Very Good Plus overall condition as refurbished antique.

Bore Condition: The grooves are dark, the lands are grey, and the rifling is deep. There is erosion throughout.

Overall Condition: The rifle has lost its finish to oxidation. The metal shows scrapes, small scratches, discoloration from oxidation, and areas of light surface erosion. The screw heads show use and oxidation. The markings are well defined. Overall, this rifle rates in about Good to Very Good condition as an antique.

Our Assessment: This Spanish Model 1895 Carbine was made by Loewe & Company of Germany as a contract rifle for Spain way back in 1894. This is an interesting Carbine as it is marked “1893” on the side rail of the receiver and  with “1894” dates on the top of the receiver & on the buttstock. The rifle is designated as a Model “1895” Carbine due to the fact that the Spanish did not approve the rifle until 1895. The 1895 Carbine designation was adopted despite the fact that many existing 1895 Carbines were marked “1893” on the side rail and were produced in 1893 & 1894. The “True” Spanish Model 1893 Carbine has a shorter stock.
This Mauser Carbine has nice markings and can still ring steel out at the range. It will add to our Military or Mauser collection. Best of all this rifle is an antique so no FFL is required…unless you live in California.

CA Legal or CA Private Party Transferable? (THIS SECTION DOES NOT APPLY TO OUT OF STATE RESIDENTS): This Antique rifle can be transferred in California but must be transferred through your local dealer or at our Simi Valley location; we cannot ship directly to you. For a gun to be classified Antique and be shipped direct, California requires that “the firearm use ammunition manufactured in or before 1898, for which ammunition is no longer manufactured in the United States and is not readily available in the ordinary channels of commercial trade.” Penal Code: 16170. Out of state residents can disregard this section – your local laws apply.