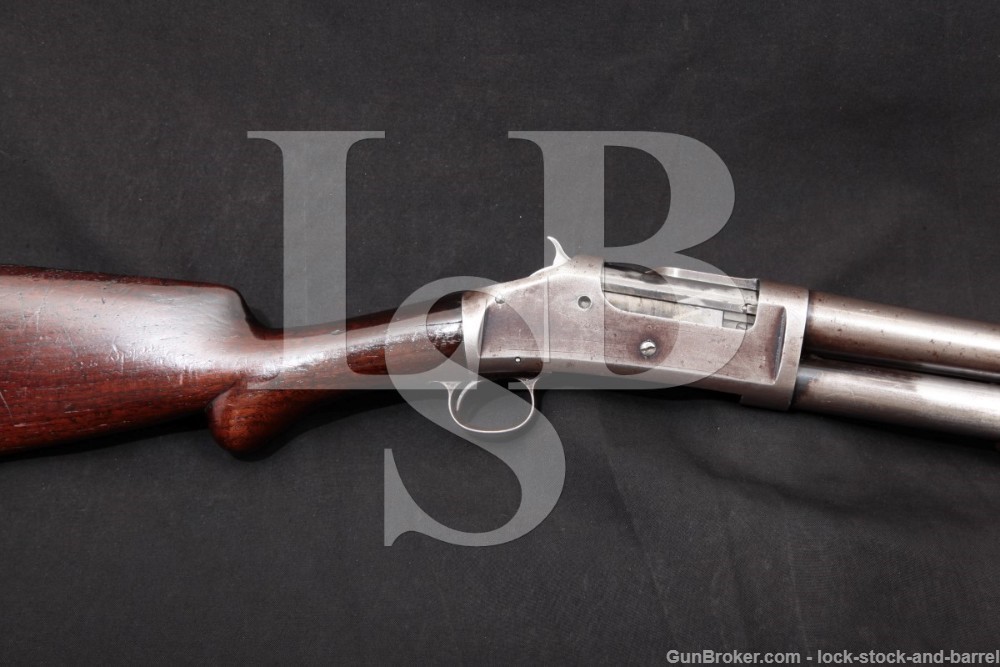 Sights / Optics: This shotgun is mounted with a brass bead 1/2″ from the muzzle. The top of the receiver at the front has a groove which serves as a sighting plane.

Stock Configuration & Condition: The stocks are a two piece walnut set with serrated forend, plain pistol grip stock and checkered steel buttplate. The forend has cracks at the rear on each side, the left side across the mounting screw hole with a chip-loss at the rear edge, and some scattered nicks, dings, and scratches. The buttstock has cracks in the wrist at each side and one at the heel with several scattered nicks, dings, scuffs and scratches. The LOP measures 13 3/4” from the front of the trigger to the back of the buttplate. The plate has gone to a dark patina with wear at the heel and toe, some scattered nicks and scratches, and generally well defined checkering. Overall, the stocks are in about Good-plus condition as Antique.

Bore Condition: The bore is mostly bright with some scattered minor erosion. There is a ring of uneven surface in the bore just in front of the magazine bracket, in the location of a ring visible on the outside of the barrel.

Overall Condition: This shotgun retains about 12% of its metal finish. Strongest remaining finish is in the bolt and lifter with some remaining finish in protected areas such as the bottom of the barrel over the magazine, the top of the magazine under the barrel, and the rounded areas at the front and rear of the receiver flats. Remaining surfaces have been worn to white with mottled discoloration from oxidation, nicks, dings, scuffs and scratches including an odd ring around the barrel in front of the magazine bracket. There is infrequent surface erosion. The action shows operational wear. The screw heads range from sharp to disfigured with useable slots. The markings are clear. Overall, this shotgun is in about Very Good condition as Antique.

Our Assessment: The Model 1893 holds a distinguished place in the long line of firearms designed by John M. Browning for production by the Winchester Repeating Arms Company. Browning was working on a slide-action design when Winchester approached him to design a lever-action repeating shotgun to complement their lever-action rifles. While the introduction of their 1890 slide-action rifle caused a similar motivation to introduce a slide-action shotgun, Winchester also wanted to compete with the Spencer and Burgess slide action repeating shotguns. Their desire to compete in this market was so strong that Winchester actually bought out Burgess and discontinued production of their shotgun. The 1893 was a superior design to both of these shotguns, being comfortable to operate and more robust than the compeition. However, the gun was designed specifically for use with black powder shotshells, and was not strong enough to handle the higher pressures of smokeless powder which was gaining popularity in the early 1890s. For this reason, Winchester asked Browning to re-design a gun which would be compatible with the new propellant, and the iconic Model 1897 was born. The 1893 is particularly rare as once the 1897 was introduced, they offered to exchange one of the new models for any dealer or owner who wished to trade in their 1893. The traded in shotguns were then destroyed, severely reducing the number of shotguns which remained of the original 35,000 produced. Between this destruction and the more than 125 years which have passed since the gun’s introduction, not many 1893s are left. This example is a fairly early gun, serial 1747. Considering that a gun which was kept when the 1897 was offered as a replacement was probably serving well as a hunting shotgun for its owner, it has weathered the years well. It even has a 32″ barrel, Cylinder Bore, and a checkered steel buttplate, each a special-order feature for the 1893s. For the serious Winchester collector, an 1893 is a must-have and difficult to obtain, much less one with such an early serial number and special order features. This a great opportunity for such collectors and a rare piece, indeed. Please see our pictures and good luck!