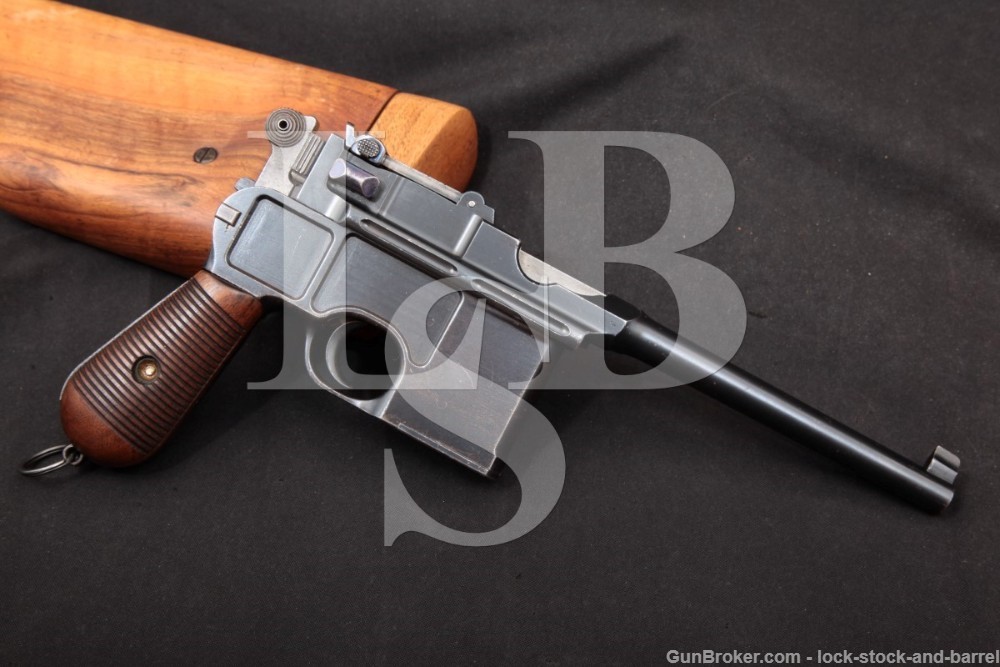 Stock Configuration & Condition: The grips are two-piece serrated walnut panels with 23 horizontal serrations each. The grips have minor handling wear with no notable damage. There are no chips or cracks. Overall, the grips are in about Fine-plus condition as not original to the gun.

Bore Condition: The bore is bright. The rifling is sharp. There is infrequent minor erosion in the bore, some of which should prove to be stubborn fouling after a patient cleaning.

Overall Condition: This pistol retains about 90% of its metal finish. The finish is thinning at some edges and corners. There is wear in the backstrap consistent with installation and removal of a stock. There are some scattered nicks, scuffs and scratches. There is infrequent surface oxidation, most concentrated on the magazine floorplate and some in the grip areas. The action shows light operational wear. The screw head is tool marked with a strong slot. The markings are generally clear. Overall, this pistol is in about Very Good-plus condition as refinished and re-chambered.

Box, Paperwork & Accessories: This pistol comes in a wood stock/holster marked “841”. The stock/holster is not numbered to the pistol, so it should be used as a holster only. The stock/holster has a chip at the right-front of the top tang which appears to have been repaired with the original piece, but otherwise has only a few scattered minor marks. Overall, the stock/holster is in about Fine condition as likely refinished and not original to the gun.

Our Assessment: The Broomhandle Model 1896 Mauser is a pistol with a very distinctive appearance and a distinguished history. Early production of the 1896 saw a host of variations which make them a prime candidate for collectors. In addition to contracts for a number of different militaries, use in famous conflicts including The Great War, there were production changes throughout the first years which give the collector a number of different versions to find. This example was made in 1898 and sold through Westley Richards, Mauser’s exclusive distributor in England. It was further branded for S.W. Silver & Co., outfitters who principally supplied colonists and the Army. It has early features including the pattern of milled panels on the sides of the frame, long, thin extractor, firing pin retained by a plate in the rear of the bolt, trigger mounted in an assembly separate from the frame, first-style safety, and “cone” hammer. Many of the numbered parts match, but there are some which have been replaced. Sometime between 1898 and 1985, the pistol was re-chambered, likely originally a 7.63mm Mauser, to 9mm Luger. It’s not clear quite how this pistol received a 1985 vintage British commercial proof while not having signs of earlier British proofs or American import markings, but here it is! While there were many 1896 pistols made, this pistol’s early features, 9mm chambering, and intriguing, if mysterious history will make it a fantastic addition to any collection, even those which are quite advanced. Please see our photos and good luck!

CA Legal or CA Private Party Transferable (THIS SECTION DOES NOT APPLY TO OUT OF STATE RESIDENTS): This cartridge-firing Antique can be transferred in California but we will transfer through your local dealer or at our Simi Valley location; we will not ship directly to you. This pistol CAN be transferred as a Private Party Transfer (PPT) at our Simi Valley location. Out of state residents can disregard this section – your local laws apply.