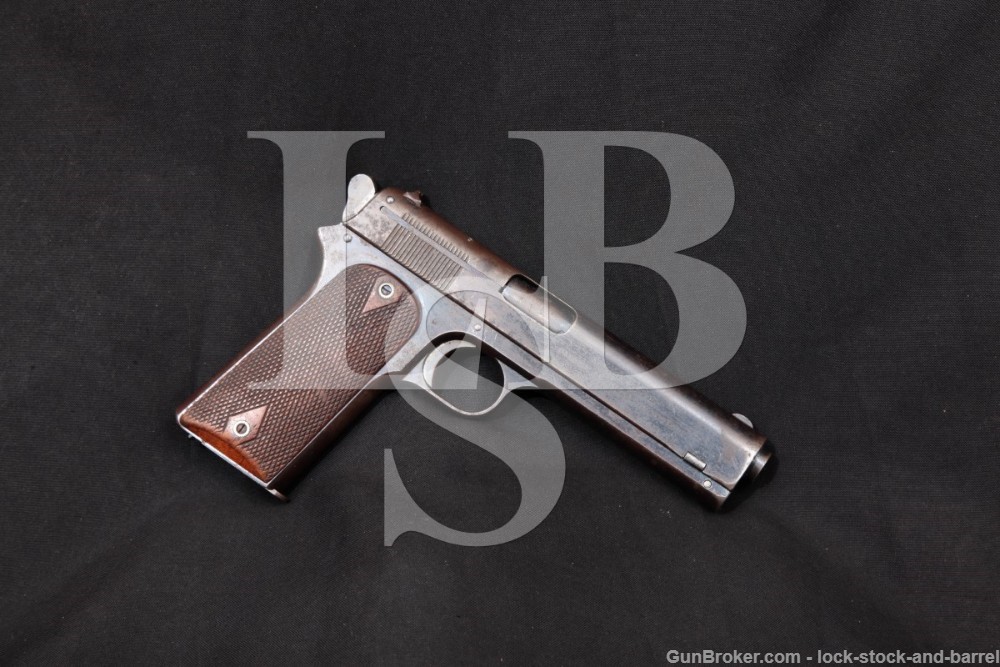 Stock Configuration & Condition: The grips are hand-checkered walnut with smooth diamond patterns around the grip screws. The grips have a few scattered nicks, compressions and scratches. There are areas of discoloration from handling and oil. The right panel has a vertical crack which runs from top to bottom on the inside, but has not quite broken into two pieces on the outside. The checkering is generally well defined. Overall, the grips are in about Fair-plus condition.

Bore Condition: The bore is gray with sharp rifling. There is light erosion scattered through the bore with infrequent minor pitting.

Overall Condition: This handgun retains about 40% of its metal finish. There is finish wear scattered throughout, most notable on the slide and in the grip areas. The worn areas show surface oxidation and some minor erosion. There are scattered nicks, scuffs and scratches. The trigger still shows some fire blue and there is some case color still visible on the hammer. The screw heads range from sharp to lightly tool marked with strong slots. The pin heads range from unmarred to lightly tool marked but not peened. The wedge still has its indexing stud. The firing pin is still the original bronze. Overall, this pistol is in about Good condition.

Mechanics: The action functions correctly. The trigger pull is crisp. The slide shows no play to the frame. This pistol does not have a safety but does have a half-cock position on the hammer. The magazine release is on the bottom of the butt. We did not fire this handgun. As with all used firearms, a thorough cleaning may be necessary to meet your maintenance standards.

Box, Paperwork & Accessories: This pistol comes with a single 7-round Colt 1905 magazine. The magazine has operational wear, surface oxidation which is most notable on the floorplate, intact feed lips and a strong spring, in about Good condition.

Our Assessment: The Ordnance Department of the U.S. Army convened a board of two men, Capt. John t. Thompson and Maj. Louis A. La Garde to determine a minimum handgun caliber for use by the U.S. Military in 1903. In 1904, a month before the report was released, Union Metallic Cartridge Company (U.M.C.) received “figures for the proposed ctgs.”. UMC began work on cartridges, and shortly thereafter Colt set to work experimenting on a .45 caliber pistol based on their 1902 Military model. U.M.C. came up with a rimless .45 cartridge that they were producing by April 1905. Meanwhile, Colt had John M. Browning try to figure out how to handle the stresses caused by higher powered cartridges using the M1902 pistol as a baseline. By May 1905, Browning had applied for a patent covering a new barrel design with locking lugs on the bottom to lock it to the frame. In 1907, Army tests began on guns from 8 different manufacturers, which was narrowed down to Colt’s Model 1905 and pistols from Savage and Luger. Changes were requested, and Colt came up with a prototype of the new Model 1907 by Sept.1907. Only about 207 of this new model were made, making them some of the most desired collector guns in the world. Further modifications resulted in the Model 1911, which was adopted by the Army and is still in use until this day as the M1911-A1. Although the M1905 wasn’t adopted by the Army, they were made and sold commercially except for those used in government testing. The oil polished mirror finish Colt put on the pistols, with a fire blue or case-colored finish on the smaller parts, made them very desirable. This M1905 pistol was made in 1906, the second year of production. It has about 40% of its original finish remaining, and is in about Good condition. The bore is gray with sharp rifling, scattered light erosion and infrequent minor pitting. The pistol is in excellent mechanical condition and even comes with a Colt 1905 magazine. The grips are showing their age and care should be taken with the right grip as it has nearly split into two pieces. This model, along with its M1900 and M1902 predecessors, is a must-have amongst Colt collectors as being the first of the large framed Colt semi-automatics. As only 6,210 of the M1905 pistols were made, they become even more desirable with every passing year. We expect the collectors of Colt autos are going to be very interested in this pistol. Please see our photos and good luck!

CA Legal or CA Private Party Transferable (THIS SECTION DOES NOT APPLY TO OUT-OF-STATE RESIDENTS): This C&R Pistol CAN be sold as a dealer sale in California but CANNOT be transferred as a Private Party Transfer (PPT) as our Simi Valley location. All C&R firearms must be transferred through your local dealer OR at our Simi Valley location; we cannot ship directly to a C&R holder in California. Out of state residents can disregard this section – your local laws apply.