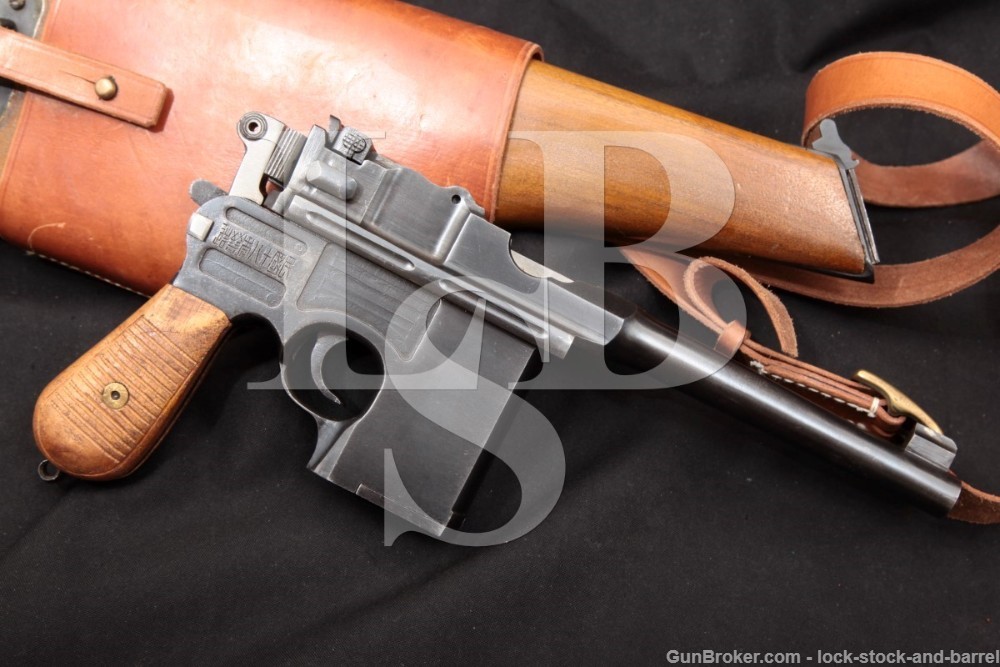 Year of Manufacture: We believe this is from a production run in the 1980’s. There were some made in the 1920s and 1930s, but the condition and import mark indicates newer production.

Markings: The left shoulder at the chamber, the back of the hammer, the back of the frame, the top of the cocking piece on the bolt, the bottom of the locking block, the inside surface of the magazine floorplate, and the side of the follower are marked “1268”. There are Chinese characters on both sides of the frame. The front strap has the import marks “CHINA / .45 ACP” and “BTC / MONTE, CA”.

Stock Configuration & Condition: The grips are two-piece grooved wood. The grips have light handling wear with some discoloration at the bottom of the left panel. There are no chips or cracks. Overall, the grips are in about Very Good-plus condition.

Overall Condition: This pistol retains about 95% of its metal finish. There is some scattered light finish wear and edge thinning consistent with holster wear. The action shows minor operational wear. There are a few scattered minor nicks and scratches. The screw head is tool marked with a strong slot. The markings are clear. Overall, this pistol is in about Very Good-Fine condition.

Mechanics: The action functions correctly. The trigger has a smooth takeup with a little bit of creep before it breaks. We did not fire this pistol. As with all used firearms, a thorough cleaning may be necessary to meet your maintenance standards.

Box, Paperwork & Accessories: This pistol comes with a wooden shoulder stock/holster and leather shoulder harness. The stock/holster and harness have some scattered light wear, nicks, and scuffs. The leather has some spots of discoloration, but the stitching is intact. Overall, the stock/holster is in about Very Good condition.

Our Assessment: The Broomhandle Model 1896 Mauser is certainly an interesting looking firearm. During the Chinese civil war in the 1920s and 30s, international arms embargoes made rifles difficult to acquire – which led to a lot of popularity for pistols with shoulder stocks. The C96 “Broomhandle” Mauser in particular was popular, and it was copied by a number of Spanish firms for sale in China as well. China began manufacturing a copy of the C96 as early as 1918 and by the late 1920s, there were a total of 11 government arsenals manufacturing C96 pistols. Yen Hsi-Shan, the Governor General of Shanxi province starting in 1912, wanted to equip his forces with the most modern firearms available and built an arsenal to produce weapons for his troops. They started making a copy of the M1921 Thompson submachine gun during the late 1920s, and the problem of having to supply and carry two different calibers of ammunition, one for their Thompsons and another for their 7.63mm C96 pistols soon can apparent. A scaled-up copy of the C96 to fire .45 ACP cartridges was designed and began manufacture in 1928. Approximately 8000 Type 17 (Seventeenth Year of the Nationalist Chinese Rule starting in 1911) “Hand Cannons” were made at the Shanxi Arsenal from 1928-1931 and became so popular with collectors that another batch was made in China during the 1980s. This Model 17 .45 Caliber Broomhandle was one of those made in the 1980’s. This pistol has about 95% of its finish remaining, and is in about Very Good-Fine condition. It has a bright bore with sharp rifling and no erosion. Collecting C96 Mausers can be quite an undertaking, as there are many variants (large and small ring hammers, etc.), and no C96 collection would be complete without Spanish and Chinese copies included, at least the ones made by major gun manufacturers and arsenals. Of the oddball copies, the most collectible is the .45 Model 17“Hand Cannon” made by Shanxi, and we would think the more modern copies are just as collectable, especially if they come with a shoulder stock as does this one. Please see our photos and good luck!

CA Legal or CA Private Party Transferable (THIS SECTION DOES NOT APPLY TO OUT-OF-STATE RESIDENTS): This Pistol CANNOT be sold as a dealer sale in California but CAN be transferred as a Private Party Transfer (PPT) at our Simi Valley location. Out of state residents can disregard this section – your local laws apply.