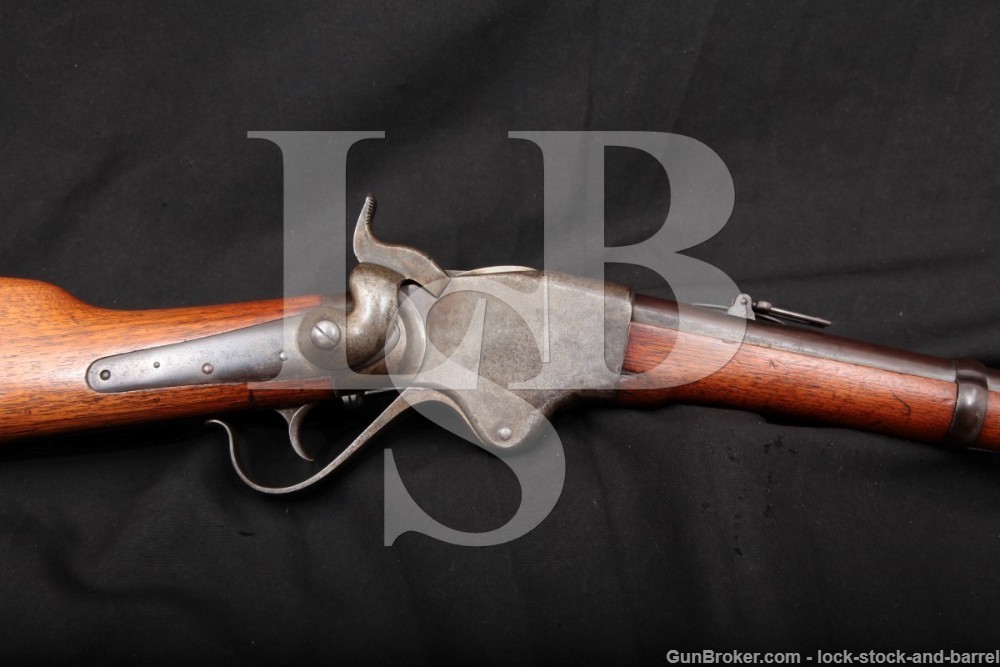 Stock Configuration & Condition: The stocks are two piece smooth walnut with a banded forend, straight wrist with sling bar on the left side, straight comb and steel carbine-style buttplate. The buttstock houses the magazine tube, removed by rotating a tab at the rear and pulling out through the buttplate. The belly of the stock is inlet for a sling plate, but none is present. The stocks have scattered nicks, dings, scuffs and scratches. There are a few minor losses around the front edges of the wrist, a small loss at the toe, and another at the rear edge of the forend on the right. The LOP measures 12 7/8″ from the front of the trigger to the back of the buttplate. The plate’s case color has mostly muted showing some scattered discoloration from oxidation and light wear. Overall, the stocks are in about Very Good condition as Antique.

Bore Condition: The three-groove rifled bore is semi-bright. The rifling is sharp where not interrupted by erosion. There are spots of light erosion and pitting scattered through the bore.

Overall Condition: This rifle retains about 10% of its metal finish. The exposed portion of the barrel has mostly gone to a light patina with stronger blue finish under the barrel band and forend. The receiver’s case color has mostly muted and shows discoloration from oxidation, most notable on the left-front. There is good case color on the inside face of the hammer, the hammer notch in the receiver, and on portions of the lever/block assembly visible with the action open. There are some scattered light nicks and scratches. The screw heads range from sharp to disfigured with useable slots. The markings range from clear to worn and incomplete. Overall, this rifle is in about Very Good condition as Antique.

Mechanics: The action functions correctly. The hammer has a half-cock safety position. This rifle equipped with a Stabler Cut-off device that has a lever mounted in front of the trigger. When the lever is rotated to the outside, the rifle functions correctly. When the lever is rotated to being in-line with the axis of the rifle, the rifle’s magazine tube is blocked, and the rifle functions as a single shot rifle. We have not fired this rifle. As with all used firearms, a thorough cleaning may be necessary to meet your maintenance standards.

Our Assessment: The inventor of the Spencer Carbine was Christopher Miner Spencer, one of the leading figures of the machine tool industry. The Spencer carbine was different from any other firearm of its time. It was accurate; fired rapidly; had a long effective range; and held seven metallic cartridges that weren’t affected by moisture. It could be fired more rapidly than a Colt style revolver and reloaded in one-tenth the time. By the end of the Civil War, more than 144,000 Spencer rifles and carbines had been manufactured; over two-thirds of which were purchased by the U.S. government. To keep up with demand, Spencer subcontracted some production to the Burnside Rifle Co. of Providence, Rhode Island. Spencer rifles and carbines met with high praise from those who were equipped with them, and with respect from those who faced them in battle. In its first combat test, Spencer-armed Union troops under the command of Colonel John Wilder earned the nickname “Lightning Brigade” when they defeated a numerically superior Confederate force at the Battle of Hoover’s Gap, Tennessee on June 24, 1863. This is a Spencer carbine that was modified post-war by Springfield Armory. The modifications included sleeving the barrel for a smaller .50 caliber projectile with three-groove rifling and Stabler cut-off devices. The carbine is in about Very Good condition with about 10% of its finish remaining. The bore is semi-bright with sharp rifling where not interrupted by erosion. The wood to metal fit on this rifle is still quite good. This is a nice find for collectors of Civil War carbines and other early American cartridge rifles. Please see our photos and good luck!