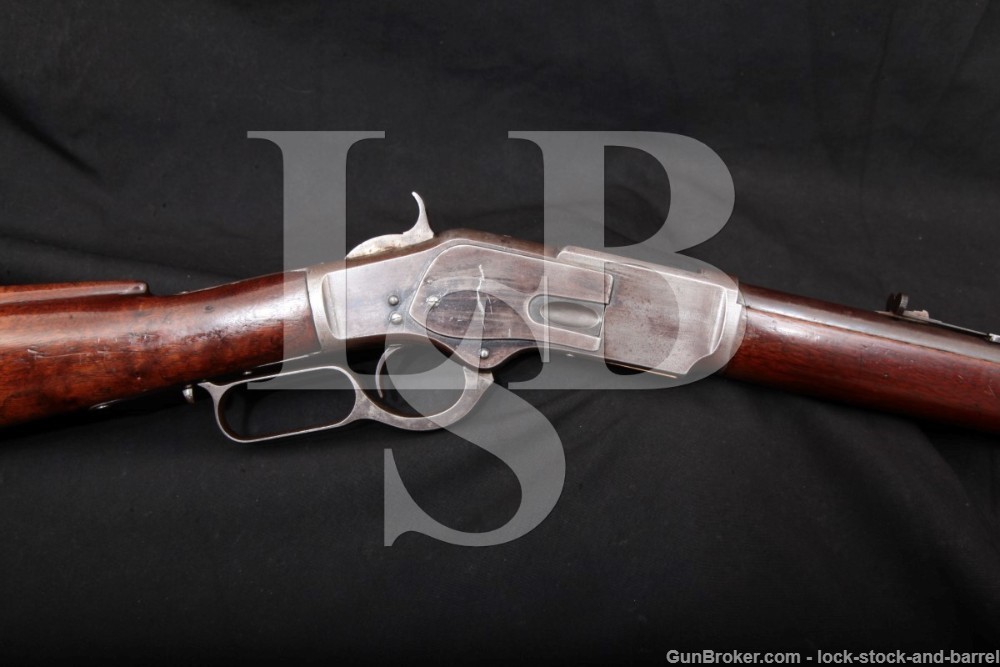 Stock Configuration & Condition: The stocks are two-piece smooth walnut with capped forend, straight grip, straight comb and steel crescent buttplate with sliding trapdoor in the rear face. The buttstock has a severe drop, approximately 6″ at the heel with an oddly fluted comb, likely not original to the gun. The stocks have several scattered nicks, dings, scuffs and scratches with thinning finish on the top edges and rear of the forend and in the wrist. The buttstock has some small losses around the tangs. There are no cracks. The LOP measures 14 7/8″ from the front of the trigger to the back of the buttplate. The plate has mostly worn to white with some scattered light surface oxidation. Overall, the stocks are in about Very Good condition as Antique and not original to the gun.

Bore Condition: The bore is gray with well defined rifling. There is light erosion throughout the bore with less frequent light pitting.

Overall Condition: This rifle retains about 7% of its metal finish. The barrel retains finish in protected areas such as above the magazine tube and around the sights. Similarly, the magazine tube retains finish on the top portion protected by the barrel. The receiver retains finish around the sideplates, behind the right sideplate, and on the bottom around the trigger. Other surfaces have been worn to white with a light patina forming. The receiver has some scattered patches of light surface erosion. The action shows operational wear. The screw heads range from sharp to disfigured with useable slots. The markings are clear. Overall, this rifle is in about Very Good condition as Antique.

Mechanics: The action functions correctly. This early model does not have a lever safety. The hammer has a half-cock safety position, there is a lever lock on the lower tang. The top of the receiver is mortised for a 1st Model dust cover, but no cover is present. We have not fired this rifle. As with all used firearms, a thorough cleaning may be necessary to meet your maintenance standards.

Our Assessment: One of the most successful, and certainly one of the most famous Winchester rifles was the Winchester Model 1873, known as “The Gun that Won the West” for its predominant role in the hands of Western settlers. The Model 1873 had a steel frame that was much stronger than the brass framed Model 1866, allowing Winchester to develop a family of powerful new cartridges, with Colt usually producing Single Action Army revolvers in the same calibers shortly after they were developed. The .44-40 Win. cartridge, also known as the .44 WCF, was introduced by Winchester in 1873 as Winchester’s first metallic centerfire cartridge. It would be the only cartridge offered for the 1873 until 1879 when the necked-down .38-40 WCF cartridge was added with others soon to follow. Colt produced a single action revolver chambered for both of these cartridges, and through law enforcement use and hunting, the cartridges were made popular due to their dual use in both rifle and pistol. This Model 1873 is a fairly early 1st Model rifle made in 1876. It has a special-order 24 ¼” round heavy barrel chambered in .44-40 Win. and a crescent shaped buttplate. Early features of this rifle include a lack of a lever-safety, no caliber marking, and the provision for a 1st Model dust cover, though this rifle is missing the cover. The buttstock appears to have been replaced with a quite long stock with a severe drop, possibly by the gentleman who personalized the sideplate. Given the engraving on the sideplate being dated 1876, it’s possible this was done by the original owner. In about Very Good overall condition, the rifle still has a fully functioning action and a shootable bore. All M1873 rifles are collectable, and we expect to see this rifle find a home in a collection of lever action rifles next to its 1866, 1876, 1892 and 1894 cousins. Please see our photos and good luck!