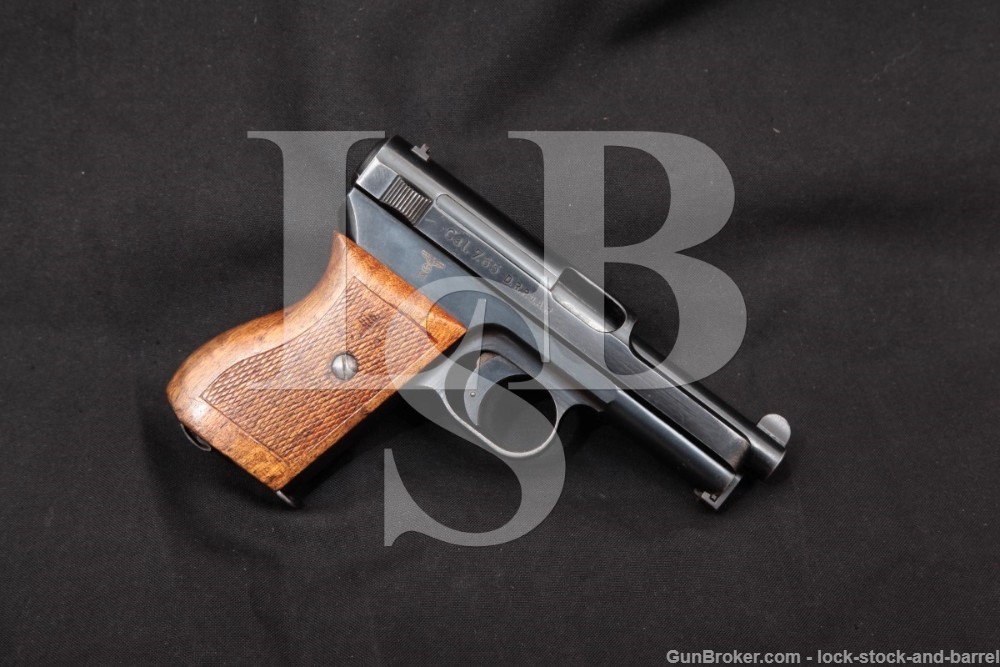 Sights / Optics: The front sight is a half-round blade that is integral to the barrel. The rear sight is a flat-topped “U” notch dovetailed into the top of the slide.

Stock Configuration & Condition: The grip is one-piece checkered walnut with smooth borders that enclose the backstrap. There are scattered draglines, compressions, and little impact mark. The most noticeable defect is an impact mark on the right side at the top. There are some scrapes and some thinning to the finish. The checkering is visible but smooth. There are no chips or cracks. The grip is proud to the front strap, very common with these. The grip is in about Very Good overall condition.

Bore Condition: The bore is semi-bright with light surface erosion. The rifling is sharp. There is a bulge at the front sight, hard to see on the exterior but easily felt upon running a finger over the barrel.

Overall Condition: This handgun retains about 85% of its metal finish. The finish has thinned on the edges. The pistol has some scattered rubs that have thinned the finish lightly. The pistol has some light pinprick erosion on the sides of the slide at the front. There are some scattered rubs and draglines. There are some light scrapes on the sides of the trigger guard. The front strap has some little scrapes and spots of frost. There are a few scattered marks. The grip screws are lightly worn with strong slots. The markings are clear. Overall, this handgun rates in about Very Good condition.

Mechanics: The action functions correctly. The safety is set by pushing down on the safety lever and released by pushing in on the small button just below it. The slide locks back on an empty magazine and closes upon a magazine being inserted. We did not fire this handgun. As with all used firearms, a thorough cleaning may be necessary to meet your maintenance standards.

Box, Paperwork & Accessories: This pistol comes with one 8-round magazine. The mag is marked with a banner logo on the baseplate and also “0.1834 X”. The mag has little spots of erosion and streaks of finish loss. The mag rates in about Very Good condition

Our Assessment: Mauser began working on a locked-breech semi-automatic pistol, the M1907, and several patents were filed, but the pistol was never produced. The design was changed to a blowback design and released in 6.35mm in 1910. A slightly larger version of the same pistol was made in 7.65mm as the Model 1914. There are several variations due to changes such as lettering or slide serrations to name just a few, becoming the 1910/14, 1910/34, and 1934 models. The Model 10/14/34 pistols were made from 1910 until 1941, with close to a million pistols manufactured. This pistol is a Nazi German navy with the Nazi eagle over “N” on the right of the frame. This one is a 4th variation which was approximately 544000 to 627000, it is the right range and the 4th variations were not made with property numbers on the front strap (Pg. 171-172 “Axis Pistols Volume II” by Jan C. Still). These were made in four distinct variations and were apparently intended for a different part or unit of the Kreigsmarine, this one looks nice and will add well to your military collection, especially if you have a few other of these variants. Please see our photos and good luck!

CA Legal or CA Private Party Transferable? (THIS SECTION DOES NOT APPLY TO OUT-OF-STATE RESIDENTS): This C&R Pistol CAN be sold as a dealer sale in California and CAN be transferred as a Private Party Transfer (PPT) as our Simi Valley location. All C&R firearms must be transferred through your local dealer OR at our Simi Valley location; we cannot ship directly to a C&R holder in California. Out of state residents can disregard this section – your local laws apply.