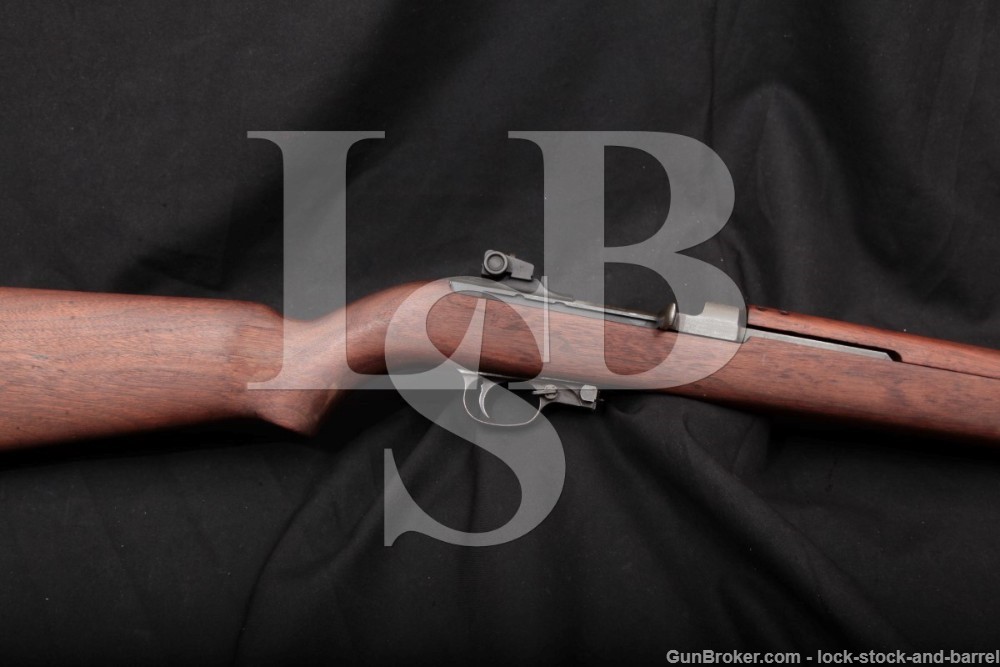 Sights / Optics: The front sight is a post set between two protective wings with the whole assembly pinned to the front of the barrel. The Type II rear sight is a fully adjustable aperture assembly dovetailed to the rear of the receiver.

Stock Configuration & Condition: The stocks are two piece smooth hardwood with a pistol grip, Type I barrel band with sling loop, sling well, sling pass through and a metal buttplate. The buttplate shows light scrapes, discoloration from oxidation, and wear around the edges. The wood shows minor wear with a few light nicks and scuffs. The LOP measures 13 1/8 inches from the front of the trigger to the back of the buttplate. The handguard has light-moderate play. The stock rates in about Very Good condition as refinished.

Bore Condition: The bore is mostly bright. The rifling is sharp. There are a few scattered spots of minor erosion. The bore shows an M.E. of about 2.75.

Overall Condition: This rifle retains about 95% of its metal finish. The exposed portion of the barrel has a few light nicks and scratches. The action shows operational wear. Otherwise, there are only light handling marks. The screw heads are lightly tool marked with strong slots. The markings are clear. Overall, this rifle is in about Fine condition as rebuilt.

Box, Paperwork& Accessories: None. Please note, no magazine is included.

Our Assessment: This M1 Carbine has a 1943 Rock-Ola receiver, a Rock-Ola barrel and Rock-Ola bolt with some other parts which are from other makers or post-war rebuild. Rock-Ola M1 Carbines are hard to find as they produced far fewer M1 Carbines than most manufacturers. This is a nice Rock-Ola to add to any collection.

Here is some history on the Rock-Ola company from m1family.com/topic16.html: “The Rock-Ola Manufacturing Corporation was, along with Wurlitzer, a top maker of jukeboxes. The company, which originally made slot machines, scales and pinball machines, was founded in 1927 by Coin-Op pioneer David Cullen Rockola…During the 1920s, Rockola was linked with Chicago organized crime and escaped a jail sentence by turning State’s Evidence. Starting in 1935, Rock-Ola sold more than 400,000 jukeboxes under the Rock-Ola brand name, which predated the rock and roll era by two decades, and is thought to have inspired the ter Rock-Ola was also one of the producers of the M1 carbine for the US Military during WWII, making 3.7% of the 6,221,220 made. Due to both the relative rarity of Rock-Ola carbines and the distinctive name, they are highly prized among collectors.”