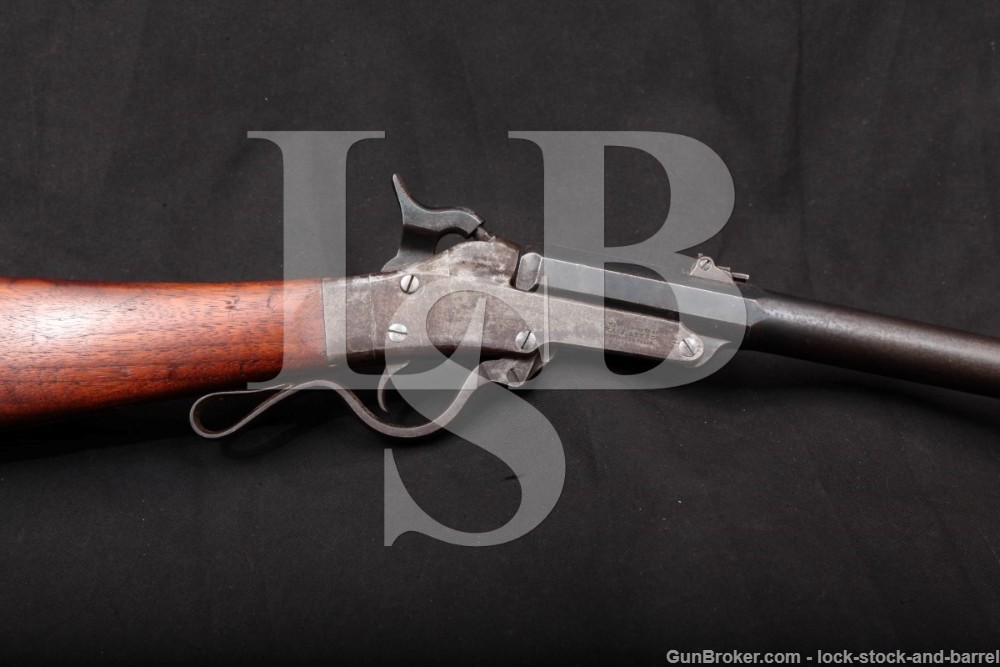 Stock Configuration & Condition: The stock is one-piece smooth walnut with straight wrist and steel semi-crescent buttplate. The stock has scattered nicks, dings and scratches. There is wear from the sling ring on the left-front of the wrist. There are a couple small losses at the toe. The LOP measures 14 3/4″ from the front of the trigger to the back of the buttplate. The plate has mostly worn to white with some scattered solid erosion. Overall, the stock is in about Very Good condition as Antique.

Bore Condition: The bore is semi-bright with sharp three-groove rifling where not interrupted by erosion. There are scattered spots of light erosion and pitting in the bore.

Overall Condition: This rifle retains about 40% of its metal finish. The finish is thinning at all edges. The barrel has scattered spots of light surface oxidation throughout with some more notable finish wear and erosion in the front half on the right. The receiver’s case color has mostly muted with remaining color in protected areas such as the water table. The receiver has scattered light surface oxidation. The hammer has blue finish mottled with light surface oxidation and there is erosion on the left of the hammer toward the nose. The nipple has light erosion on the exterior, the flash-hole is unobstructed and the mouth of the nipple shows minor wear. The screw heads range from sharp to tool marked with strong slots. The markings are clear. Overall, this rifle is in about Very Good-Fine condition as Antique.

Mechanics: The action functions correctly and the barrel lockup is solid. The nipple, which is offset slightly to the right on the top of the receiver, is clear and not deformed. We have not fired this rifle. As with all used firearms, a thorough cleaning may be necessary to meet your maintenance standards.

Our Assessment: The Maynard Patent Carbines used during the Civil War were designed by Dr. Edward Maynard, a dentist, who was best known for his invention of a mechanical priming system used in several different rifles and carbines, one of the first being the U.S. Model 1855 rifle. Many older rifles were also modified to use this system. The Maynard Patent Carbines were made by the Massachusetts Arms Company. The first model was made with the Maynard priming system and were sold to the U.S. Army and Navy in .50 caliber, and were also used by the Internal Revenue Service. The Massachusetts Arms Co. had a stock of carbines for commercial sale in various calibers, and were eager to dispose of their inventory in the months just preceding the hostilities, with the Confederate states buying .35 and .50 caliber carbines. The second model, also known as the Model 1863, omitted the Maynard priming system to increase production rates, and was sold primarily to the U.S. Army in .50 caliber. About 20,202 were made, and were used by the 9th and 11th Indiana and the 11th Tennessee cavalry regiments, in addition to others. This is a 2nd Model carbine, with two “JM” cartouches on the left side of the wrist signifying U.S. Army acceptance. The rifle is in about Very Good-Fine condition as Antique with about 40% of its original finish remaining. The bore is pretty darned good for a 160 year old black powder rifle. The action functions correctly and the barrel lockup is solid. This is a very interesting rifle, and like all breechloading carbines of the time, played an important part in the Civil War. With only 20,202 being made and far fewer having survived the war, this carbine is rare today. This will be a great addition to any collection of Civil War carbines, and deserves a spot next to all of the other single shot breechloading carbines used in the war. Please see our photos and good luck!

CA Legal or CA Private Party Transferable: This Antique percussion rifle can be sold in California.