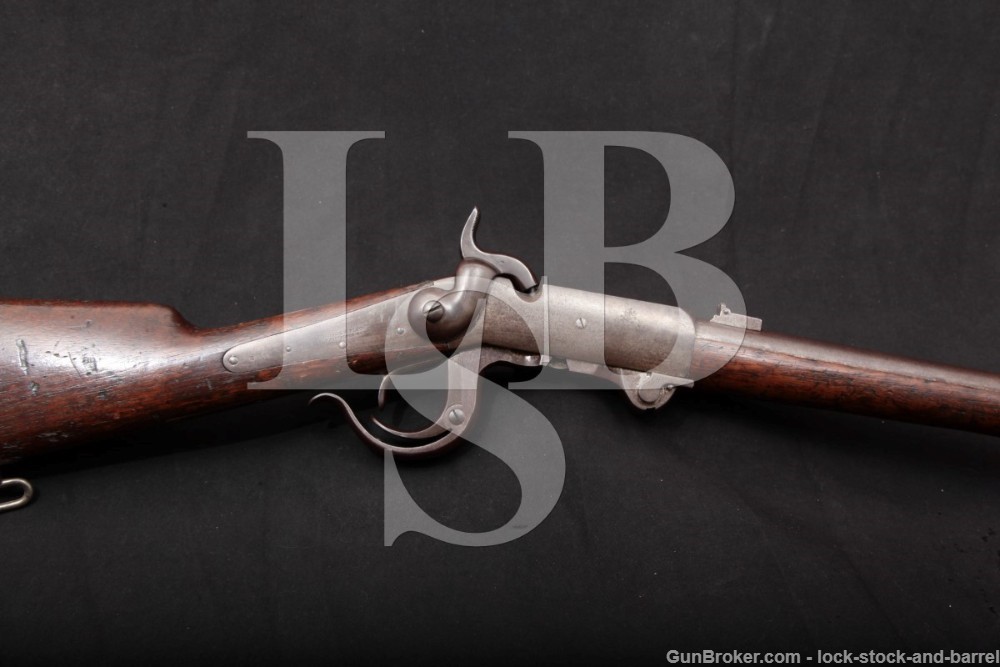 Sights / Optics: The front sight is a blade dovetailed to the front of the barrel. The rear sight presents a “V” notch in the down position and when flipped up gives a “V” notched sight for 300 yards, the base is set to the barrel by the breech. The sight would have originally had an additional 500 yard notch on the longer arm, and appears to have broken off.

Stock Configuration & Condition: The stocks are two-piece smooth walnut with banded forend, straight grip, straight comb, steel crescent buttplate and a sling swivel in the belly (there is also a sling-bar on the left of the receiver). The stocks have many scattered nicks, dings, bruises, scrapes and scratches. There are some scattered losses at edges, most notable on the right of the forend in front of the barrel band. The LOP measures 12 7/8″ from the front of the trigger to the back of the buttplate. The plate has gone to a light patina with scattered spots of erosion and wear at the heel and toe. Overall, the stocks are in about Good-plus condition as Antique

Type of Finish: The finish was originally blued and case color, but little finish remains.

Bore Condition: The bore is gray with well defined rifling. There is light-moderate erosion scattered through the bore with some light pitting.

Overall Condition: This rifle retains about 10% of its metal finish found only on protected surfaces, such as under the forend or on the interior portions of the lever assembly. Most surfaces are worn to white or gone to a light patina. There is scattered light surface oxidation and infrequent minor erosion. There are some scattered light nicks and scratches. The screw heads range from sharp to tool marked with strong slots. Most markings are clear, the cast steel barrel marking is worn. Overall, this rifle is in about Good condition as Antique (see Mechanics).

Mechanics: The guide-screw for the breech-block appears to be worn and not properly inserted in the guide slot on the right of the block. Otherwise, the action functions correctly. We have not fired this rifle. As with all previously owned firearms, a thorough cleaning may be necessary to meet your maintenance standards.

Our Assessment: The Burnside Carbines are known as the ‘Best carbines of the Civil War’, made by the worst general of the Civil War, General Ambrose Everett Burnside, whose facial hair became a more positive trait than his aptitude for warfare. Regardless, this rifle evolved from a patent date in 1856 and is surely impressive in combat, enough so that 43 Union Cavalry units were equipped with them. Instead of a muzzle loaded process, these carbines could reload in a few seconds, even on horseback. The evolution of cartridge firing breech loaded rifles never stopped even after the Civil War. This example’s breech marking and lever assembly would indicate it is a 4th model, but it has the guide-screw on the side of the receiver which is characteristic of the 5th model. The 5th model started a new serial range, so the serial number could be from either range. Either way, the rifle survives with a decent bore and good mechanics apart from the guide screw being worn. Once replaced, it should function perfectly. The serial numbers are matching on the receiver, barrel, breech-block and lever assembly. It should make a nice addition to a Civil War arms collection. Please see our photos and good luck!