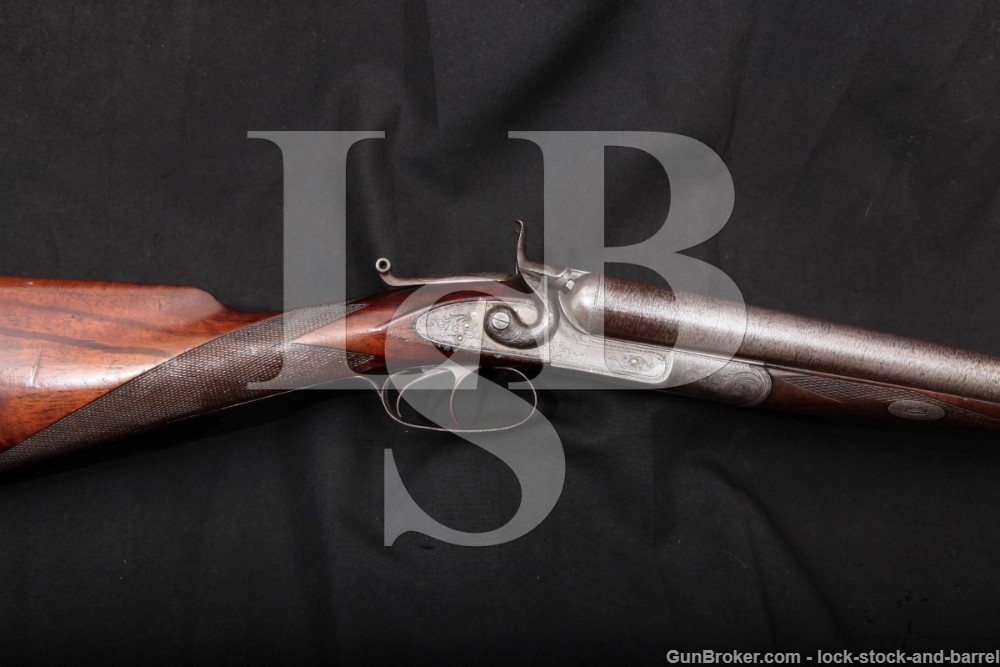 Markings: The frame, lockplates, hammers, trigger guard, forend iron, forend wedge, forend wedge escutcheon, bottom tang, buttplate around the screws, barrel release lever, screws, and back of the barrels feature beautiful scroll engraving and border engraving. The water table is marked with the serial number and the screw in the water table is marked “411 / 2206”. The interior of the forend and the forend iron are both marked with the serial number “411”. The bottom of the left barrel is marked with the serial number at the chamber. The rear barrel lug is marked “D”. The bottom of the right barrel is marked “D”. The top of the ribs is marked “E. REMINGTON & SONS, ILION, N.Y.”. The Whitmore barrel release is marked “A.E. WHITMORE’S / PATENTS / AUG. 8, 1871 / APR. 16, 1872”. The underside of the barrel release lever is marked “2206 / 411”. The bottom tang and the bottom tang recess of the stock are serial mnatched and marked “411”. The buttplate is serial matched and marked “411” on the inside.

Choke: Both Modified, both fixed.

Sights / Optics: The front sight is a brass bead set on the rib.

Stock Configuration & Condition: The stocks are two-piece early style checkered walnut with a splinter forend, straight grip, straight comb and smooth metal buttplate. The bottom of the forend previously had an inlay at the very front, it is missing. The forend has some chip losses along the top edges. The buttstock has scattered scuffs, compressions, draglines, scracthes, and impact marks. The defects have mainly darkened with age. The wood has dark discoloration on the wood around the metal. There is a long streak on the right side of the butt up by the comb appearing to be from liquid. The checkering is mainly intact and attractive but has rub wear and a few light compressions. The LOP measures approximately 13″ and 14″ from the fronts of the triggers to the back of the buttplate. The plate has patina, scabbing, and some erosion. The drop at comb is about 1 5/8″, drop at heel 2 3/4″. The cast is off. Overall, the stocks are in about Very Good condition as Antique.

Bore Condition: The bores are both semi-bright and have pitting scattered throughout.

Overall Condition: This shotgun retains about 50% of its metal finish. The frame has lost the majority of its case colored finish and has some light patina and spots of discoloration from previous oxidation. There is some pinprick erosion on the frame. The trigger guard and tang have build a heavier patina and there are some more apparent spots of erosion, mainly on the trigger guard. The hammers have a coat of patina and a bit of mottled patina. The barrels have some patina building and some spots of discoloration from previous oxidation. The barrels have some rubs, scuffs, and a few little impact marks. The barrels have some spots of light erosion. The screw heads are mainly lightly tool marked with serviceable slots, the left hammer screw has heavy damaged, we do not see a slot and it may have been welded. The markings are mostly clear, the rib marking is soft due to age and wear. Overall, this shotgun is in about Very Good condition as Antique.

Mechanics: The action functions properly including the extractor. The barrels lock up with some very light play to the receiver. We did not fire this shotgun. As with all used firearms, a thorough cleaning may be necessary to meet your maintenance requirements.

Our Assessment: This is an attractive double barrel from the early days of the Remington company and was their first breech-loading shotgun. The shotgun was announced in 1873 and was released for sale in 1874, leading collectors to use both names interchangeably, even Remington books do this. These were not even officially named, just simply referred to by the company as “Hammer Lifter”. The Remington museum has one of these rare doubles and calls it the 1873, that is what we will go with. The 1873 uses a neat barrel lever that is pushed up and retracts a sling bar on the top of the frame. The slider has two little wings that catch the hammers and lift them into the half cock position, hence the “Hammer Lifter” name. This was a great invention at the time, rebounding hammers had not surfaced and slamming shut a double barrel with protruding firing pins could have absolutely devastating consequences. The barrel uses the double lug that is common with English shotguns and Remintgon used that design in this design feature was used on the doubles up to model 1889. The 28” barrels are crafted out of damascus steel that looks like the “laminated” style that is photoed on page 271 of “Remington Double Shotguns” by Charles Semmer. With the early style checekring with matched serial numbers, and the beautiful engraving, this is for sure at least a Grade 3, but it has fancier engraving on the hammers that lead us to believe that it is Grade 4. Also, take into account that it previously had a forend inlay at the tip which was used on high grades. This one has nice bores for an Antique of its age and is mecahincally sound, plus the lockup produces only a light amount of movement!! The Hammer Lifter is a one of a kind design and comes from one of Americas favorite names in firearms. The production of the Hammer Lifters can fairly be estimated at only 5,000 with the highest recorded being 4475 and serial number 5600 is reported but it is believed to be a later model. This one, serial number 411 is an early one, it has some wear, but we think it looks great and are sure one lucky experienced collector will agree. No matter if you collect Antiques, double barrels, or Remingtons, not only do you owe it to yourself to see the photos but to drop a bid as well! Please see our photos and good luck!

CA Legal or CA Private Party Transferable (THIS SECTION DOES NOT APPLY TO OUT OF STATE RESIDENTS): This cartridge-firing Antique can be transferred in California but we will transfer through your local dealer or at our Simi Valley location; we will not ship directly to you. Out of state residents can disregard this section – your local laws apply.