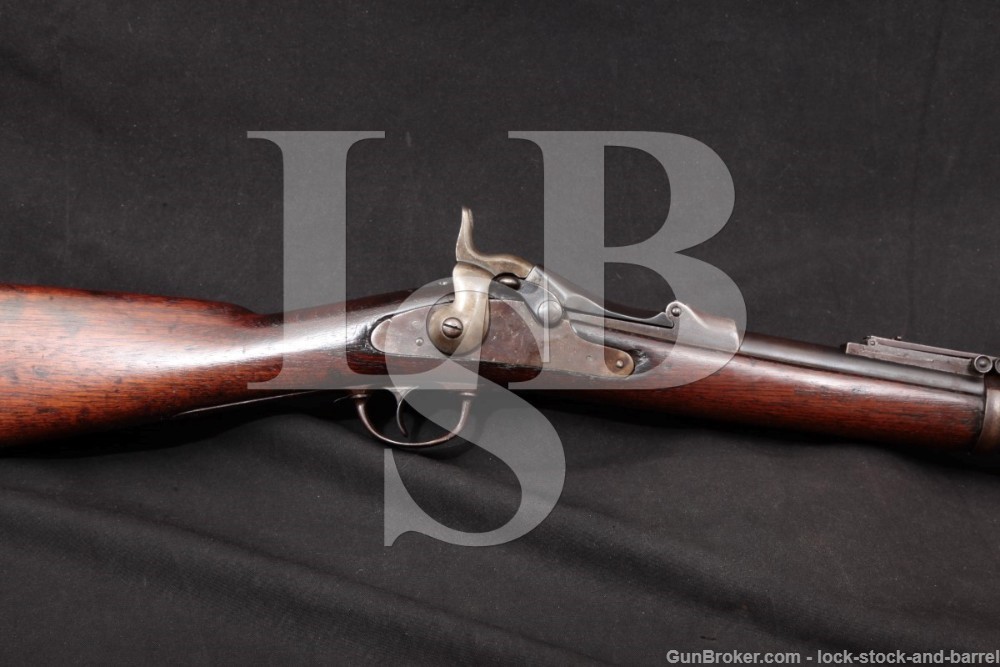 LSB#: 200820MS06
Make: Springfield
Model: 1884 Trapdoor Carbine
Serial Number: 132116
Year of Manufacture: Late 1880’s
Caliber: .45-70 Government
Action Type: Single Shot Trapdoor
Markings: The top of the breechblock is marked “U S / MODEL / 1884”. The right sideplate is UNMARKED. The top rear of the barrel is marked “V”, “P”. The top rear of the receiver is marked “132116”. The top of the buttplate in front of the mounting screw is marked “U S”. The left side of the barrel band is marked “U”.
Barrel Length: The barrel is 22” in length.
Sights / Optics: The front sight is a short blade pinned to a rectangular base on the barrel. The rear sight is a Buffington ladder sight that was used on the M1884 rifles. There is a “U” notch sight fixed to the rear of the ladder for use as a battle sight when the ladder is folded down. The base of the sight is adjustable for windage. The right side of the ladder is marked from “2-14”, with a hash line every 25 yards. The top right corner of the ladder is marked “R”. The left side of the ladder is marked “15-20” with a hash line every 50 yards. There are four different sights for use when the ladder is raised: there is a small peep sight at the bottom of the slider for use as a battle sight, a “U” notch in the base of a triangle for use from 200-1400 yards, a peep near the top of the slider for use at 1400 yards, and a “U” notch at the very top of the slider for use from 1500-2000.
Stock Configuration & Condition: The stock is a one-piece walnut with a smooth straight grip. The buttstock has a blue steel carbine style buttplate. The forend does not have a hole for a cleaning rod. The finish is an old oil finish, with some darkening at the metal. The stock has likely been sanded some time ago, but this is not obvious. There are no sling swivels and the carbine is missing the saddle ring. There are several dings, bruises, and drag lines scattered over the surfaces. There are no cracks but the wood to metal fit at the buttplate is fair at best. The comb is 10 ½” in length and the LOP measures 13 1/2” from the front of the trigger to the back of the buttplate. The buttplate shows mild erosion and a dark patina. The buttplate is in about Good condition. The stock rates in about Good condition.
Type of Finish: Blued
Finish Originality: Partially Refinished
Bore Condition: The bore is gray with sharp rifling. There is mild erosion in the bore but a good cleaning will definitely improve this to better than average.
Overall Condition: This rifle retains about 20% of its metal finish. The barrel and bands appear original finish that has turned brown, with scattered erosion and an often thick patina. The left side of the frame has spots of erosion. The trapdoor has been reblued and retains about 80% of this newer finish. The lack of markings on the lock plate is puzzling, possibly removed during a heavy cleaning or rebuild? The hammer knurling shows light wear and is still sharp to the touch. The upper tang screw and the hammer screw are disfigured. The markings are crisp. Overall, this rifle rates in about Excellent condition.
Mechanics: The action functions correctly. The hammer has quarter and half cock safety positions. We have not fired this rifle. As with all used firearms, a thorough cleaning may be necessary to meet your maintenance standards.
Box, Paperwork & Accessories: None
Our Assessment: The Model 1873 “Trapdoor” Springfield was the first standard-issue breech-loading rifle adopted by the United States Army and it and the Model 1884 and 1888 Trapdoors were the main service rifles of the U.S. Military until they were gradually replaced by the Springfield Model 1892 bolt-action rifle. George Custer’s troops were armed with them at the Battle of the Little Bighorn, and they were still used by secondary units during the Spanish-American war in 1898.

This Model 1884 Trapdoor Carbine is not the prettiest girl at the dance, but it is not a cut down rifle and still shows as a great example of an important rifle.

CA Legal or CA Private Party Transferable: This antique rifle can be transferred/sold in California.