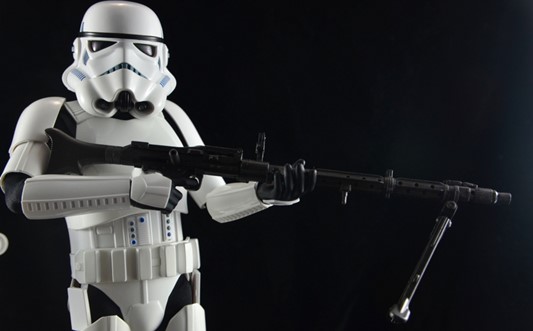 Star Wars!  The most enduring and endearing franchise in film history totals a whopping 9 films, a hot new television series, and more animated series and books than you can shake a light saber at, as well.

Originally conceived as a space western,  the iconic 1873 Peacemakers and Winchesters had to be replaced with weapons for both good and evil.  But in the world of fantasy, the sky is the limit!  So, the prop masters went to work, modifying existing platforms, to bring their time-tested practicality to imaginary, futuristic standards.

In the original film, the first individual firearm that we get a good glimpse of, is the Drearian Defense Conglomerate Defender.  Who can forget Carrie Fisher’s feisty Princess Leia slinging that delicate looking blaster?  In reality, the Princess’s gun was simply  a Vostok Margolin .22LR target pistol with a muzzle attachment. 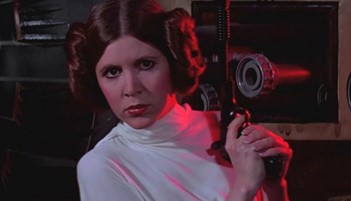 Greedo, the Rodian bounty-hunter seen briefly threatening hero Han Solo in A New Hope, carries a Blastech DT-12. It is actually started life as a Ruger MkI with a shortened barrel and finned flash hider, additions which gave it a ray gun appearance.

He is beaten to the draw by Solo, who drops him with a BlasTech DL-44 Heavy Blaster Pistol. This striking blaster is wielded throughout the series by Han Solo, and later by Luke Skywalker (Mark Hamill). Savvy film fans will quickly recognize that it is based on the venerable Mauser C96 with an added heavy barrel, scope, and the muzzle cone from an M3 “Grease Gun.” 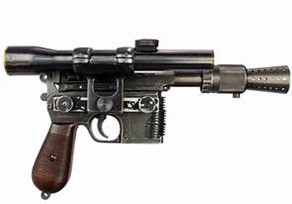 Han hit whatever he aimed at; his opponents, primarily Imperial Storm Troopers, seldom did. Was the bad aim a result of their training, or their weapons?  The E-11 blaster rifle was a light but powerful blaster rifle manufactured by the ubiquitous BlasTech Industries. It served as the standard issue weapon of Imperial stormtroopers. It bears an uncanny resemblance to the English Sterling submachine gun, descendant of the WWII workhorse, the Sten gun.  For those of you curious about such things, its capability far exceeds the 30 round Sterling as the laser blaster is capable of firing 200 shots with one charge.  From the documented on-screen evidence, it is clearly best fired from the hip, which no doubt contributes to the legendary marksmanship of the Imperial Storm Troopers.

Storm Troopers also BlasTech DLT-19 Heavy Blaster Rifle: The extra barrel length clearly helps give it the legendary precision and accuracy for which storm troopers are renowned.  Back here on Earth, the heavy blaster is based on the German MG 34 which was the first truly successful all-purpose medium machine gun, and which serves as the basis of many squad automatic weapons, even today.

Storm troopers are also occasionally armed with the BlasTech T-21 Light Repeating Blaster.  This is the Hollywood gin-up of a Lewis Gun, with the circular pan magazine removed.  The finned aluminum shroud remains, no doubt, to vent off the heat created by the lack of chambered cartridges, in turn, caused by having no actual magazine fitted.

Last but not least, at least one of the bad guys carrys EE-3 Carbine Rifle. Employed by bounty hunter Boba Fett,  it is actually a modified Webley & Scott No. 1 Mark 1 Flare Gun with a shoulder stock. 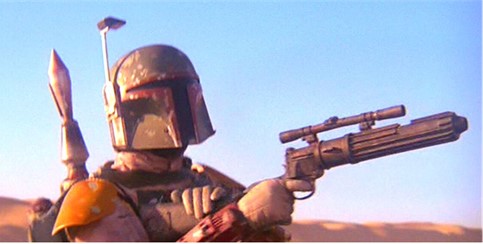 The future, it would seem, is an homage to the past, in the Star War universe.