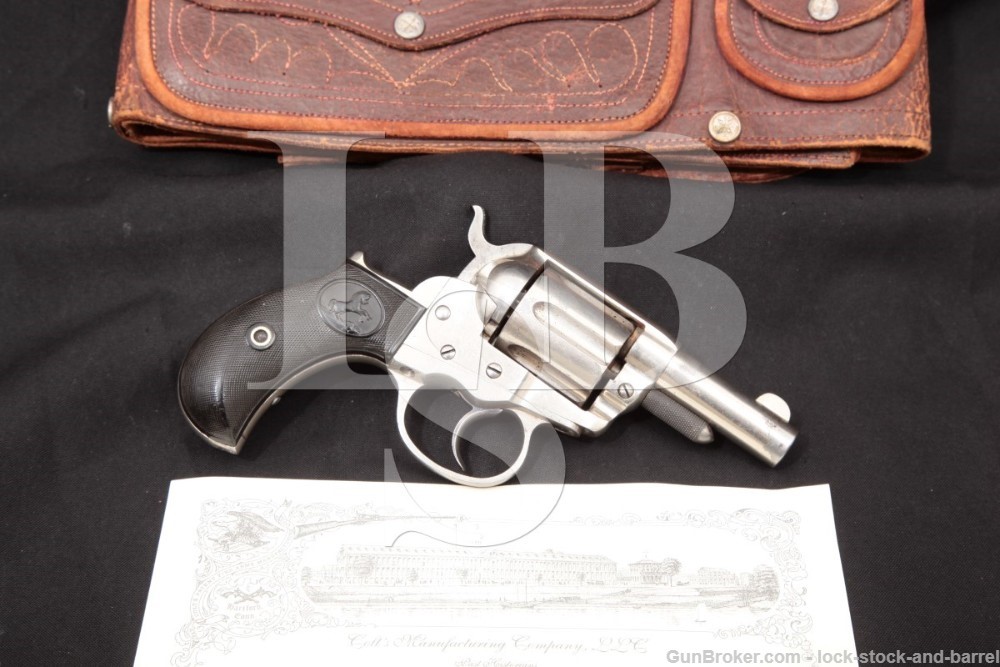 Stock Configuration & Condition: The grips are checkered black hard rubber on a bird’s head grip frame, with a Rampant Colt in an oval at the top of each panel. The left grip has a small patch of smoothed checkers below and behind the rampant colt and each has some smoothed checkers on the curved edges at the bottom-front. There are a few light nicks and scratches. There are no chips or cracks. Overall, the grips are in about Very Good-Fine condition as Antique.

Bore Condition: The bore is gray with sharp rifling where not interrupted by erosion. There is light erosion scattered throughout the bore.

Overall Condition: This revolver retains about 80% of its metal finish. There is some finish loss at the front and rear of the barrel and some scattered finish loss on the cylinder. There are scattered light nicks, scratches and some minor surface oxidation. The action shows light operational wear. The screw heads range from sharp to tool marked with strong slots. The markings are clear. Overall, this revolver is in about Fine condition as Antique.

Mechanics: The action functions correctly. The cylinder locks up tight with no play when the trigger is depressed. The double action trigger is fairly smooth, a little heavy. The single action trigger has a little creep. We did not fire this revolver. As with all used firearms, a thorough cleaning may be necessary to meet your maintenance standards.

Box, Paperwork & Accessories: This revolver comes with a Colt letter confirming the revolver’s original barrel length, finish and grip type. The revolver shipped to Hartley & Graham in New York on February 14, 1880 in a shipment of 55 guns of the same type.

Our Assessment: The Colt M1877 was a double action revolver manufactured by Colt’s Patent Fire Arms from January 1877 to 1909 for a total of 166,849 revolvers. The Model 1877 was offered in three calibers, which lent them three unofficial names: the “Lightning”, the “Thunderer”, and the “Rainmaker”. The principal difference between the models was the cartridge in which they were chambered: the “Lightning” being chambered in .38 Long Colt; the “Thunderer” in .41 Long Colt. An earlier model in .32 Colt known as the “Rainmaker” was offered in 1877. The M1877 was designed by one of the inventors of the M1873 Colt Single Action Army, William Mason, as Colt’s first attempt at manufacturing a double-action revolver and was also the first successful US-made double-action cartridge revolver. Neither “Lightning” nor “Thunderer” were Colt designations, nor used by the factory in any reference materials. Both terms were coined by Benjamin Kittredge, one of Colt’s major distributors, who was also responsible for the term “Peacemaker” for the Single Action Army. Old West Outlaw John Wesley Hardin frequently used both “Lightning” and “Thunderer” versions of the Colt 1877 revolver. This Lightning is in great condition for a 140 year old gun. It retains about 80% of its factory nickel finish, a decent bore, strong mechanics, and still has clear markings including the etched panel on the barrel. This would be a great addition to a Colt collection, especially with the included Colt letter. Please see our photos and good luck!

CA Legal or CA Private Party Transferable (THIS SECTION DOES NOT APPLY TO OUT OF STATE RESIDENTS): This Antique revolver can be transferred in California.