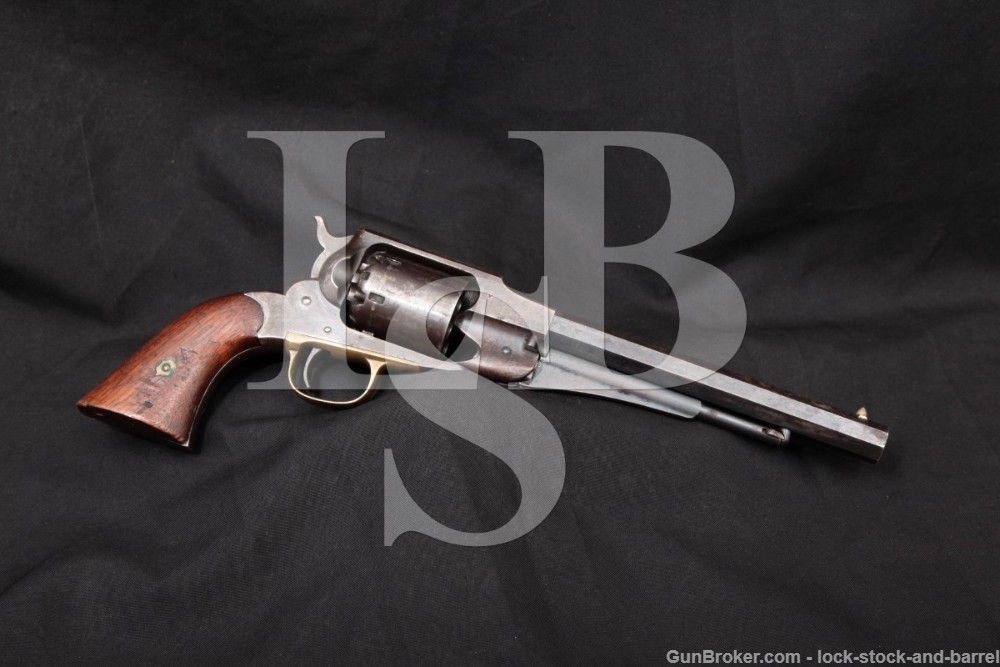 Stock Configuration & Condition: The grips are two-piece smooth walnut. There is a crack repair that runs from the top of the left grip to the bottom long the rear edge. The repaired piece of wood has a hole in it where the retaining pin goes, the pin is visible with the grip installed. The grips have impact marks and scrapes which have removed wood, most noticeable on the right panel but they have colored with age. There are some impact marks, compressions, and draglines. There are no unrepaired chips or cracks. The grips rate in about Good Plus-Very Good overall condition as Antique and as repaired.

Bore Condition: The bore is semi-bright and the rifling is worn but has remained strong and clearly defined. There is scattered moderate pitting in the bore.

Overall Condition: This handgun retains about 35% of its metal finish. The strongest remaining finish is located on the barrel. The finish has numerous scattered spots of light scabbing, oxidation, discoloration from previous oxidation, and scratches from abrasive cleaning. The scabbing is most noticeable and heaviest on the cylinder and on the left of the barrel at the front. The scratches are most noticeable on the cylinder, right of the barrel, recoil shields, and backstrap. The cylinder has a turn line and the brass trigger guard has developed an attractive patina. The screwheads display too marks with some having shallow slots. The markings are clear. Overall, this revolver is in about Good-Very Good condition as an Antique

Mechanics: The action functions correctly. The mainspring is strong and the cylinder locks up very well with only faint movement. We did not fire this handgun. As with all used firearms, a thorough cleaning may be necessary to meet your maintenance requirements.

Our Assessment: The Remington 1858 Army revolver was a sidearm used by the Union during the Civil War. The US government ordered a large number of revolvers due to a fire at the Colt factory that shut down their production of the 1860 Army Revolver. Not only was this type of revolver used in the Civil War but it found itself being used in the American West. This single action six-shot revolver is known for having a solid design and being very reliable due to its solid frame unlike the competing open tops. The solid frame design gave it an advantage over the competing Colt models, and it is said Civil War soldiers were known to trade their Colts for Remingtons after the war after seeing the differences firsthand. Buffalo Bill Cody carried a New Model Army throughout the Indian Wars and his show appearances, and never converted it to cartridge use, which is a testament to the popularity of this revolver. The New Model Army is commonly called the Model 1858 because of its patent date on the barrel, but it was not actually produced until 1863, the 1861 Old Model having preceded it. The design became one of the most beloved cap and ball designs and has such a good design and fan following that reproduction houses have been making replicas for decades. Here is your chance to pick up the real thing, this one is serial number 19452 which is very early and likely first year, “Civil War Pistols of The Union” by John D. McAulay states that in 1863 the Army was sent 31,802 .44 caliber New Models and the 19452 falls well under that number. Furthermore, this looks to be an early transitional model without the words “NEW MODEL” on the barrel and with a cone type sight instead of th elater mortised post. With the inpsection marks, this is a phenomenal Civil War revolver to add to a Civil War or Remington collection and one cannot be complete without an 1858, so drop a bid today! Please see our photos and good luck!

CA Legal or CA Private Party Transferable: This percussion Antique classified revolver can be sold and shipped direct in California.