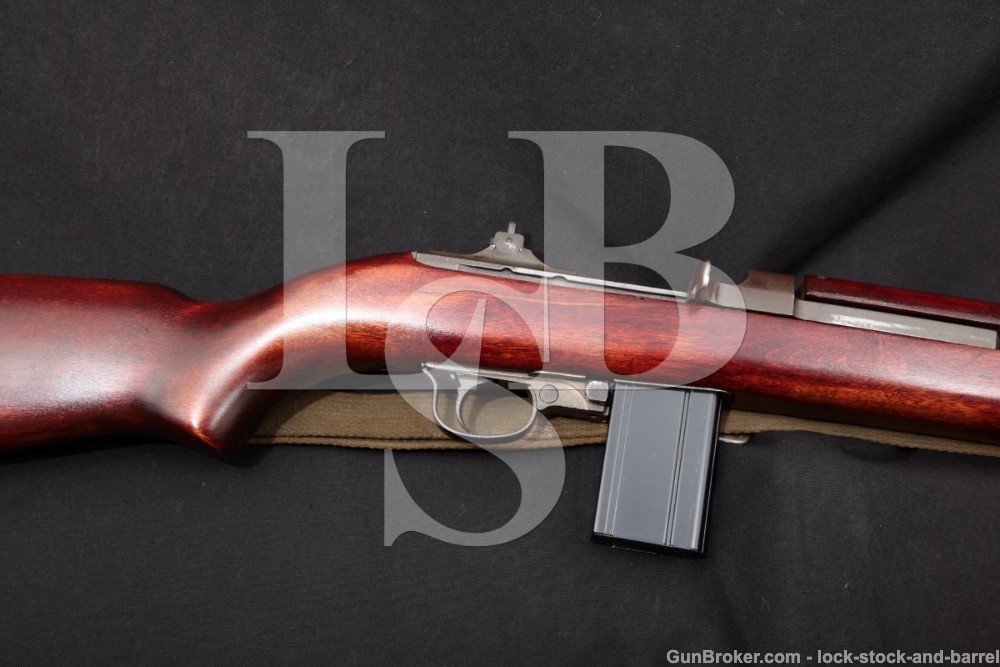 Sights / Optics: The front sight is a post set between two protective wings. The rear sight is a Type I flip-up dual aperture assembly.

Stock Configuration & Condition: The stock has a pistol grip, metal barrel band with sling loop, sling well, sling pass through, and a metal buttplate. The buttplate shows light surface erosion. The wood shows a few light nicks, scrapes and scratches. There are no chips or cracks. The LOP measures 13 1/8 inches from the front of the trigger to the back of the buttplate. The stock rates in about Very Good-Fine overall condition.

Bore Condition: The bore is mostly bright. The rifling is sharp. There is infrequent minor erosion in the bore. The bore shows an M.E. of 3.2.

Overall Condition: This rifle retains about 90% of its metal finish. The metal shows scrapes, light handling marks, and areas of discoloration from oxidation. The bolt and right side of the receiver show thinning consistent with cycling. The screw heads show use. The markings are clear. Overall, this rifle rates in about Very Good Plus condition.

Box, Paperwork & Accessories: The rifle comes with a canvas sling and a single 15 round magazine. The sling shows light wear in the canvas and some erosion in the metal. It is in about Very Good condition. The magazine shows minor scrapes & scratches, intact feed lips and a strong spring, in about Fine condition. No magazine will be included for buyers who reside where it cannot be legally transferred.

Our Assessment: This M1 Carbine was made back in 1943 by the International Business Machines Corporation (IBM). It has early USGI parts including the two-position aperture rear sight, Type II barrel band without bayonet lug and it appears to have retained its original IBM marked barrel as well as several other IBM parts. This M1 Carbine looks good and comes with a canvas sling and a single 15 round magazine. This IBM M1 Carbine will add to your Military or WWII collection.

CA Legal or CA Private Party Transferable (THIS SECTION DOES NOT APPLY TO OUT-OF-STATE RESIDENTS): This C&R rifle can be transferred in California. All C&R firearms must be transferred through your local dealer OR at our Simi Valley location; we cannot ship directly to a C&R holder in California. Out of state residents can disregard this section – your local laws apply.
The high capacity magazines are not available to residents of California or any other jurisdiction with magazine capacity restrictions.