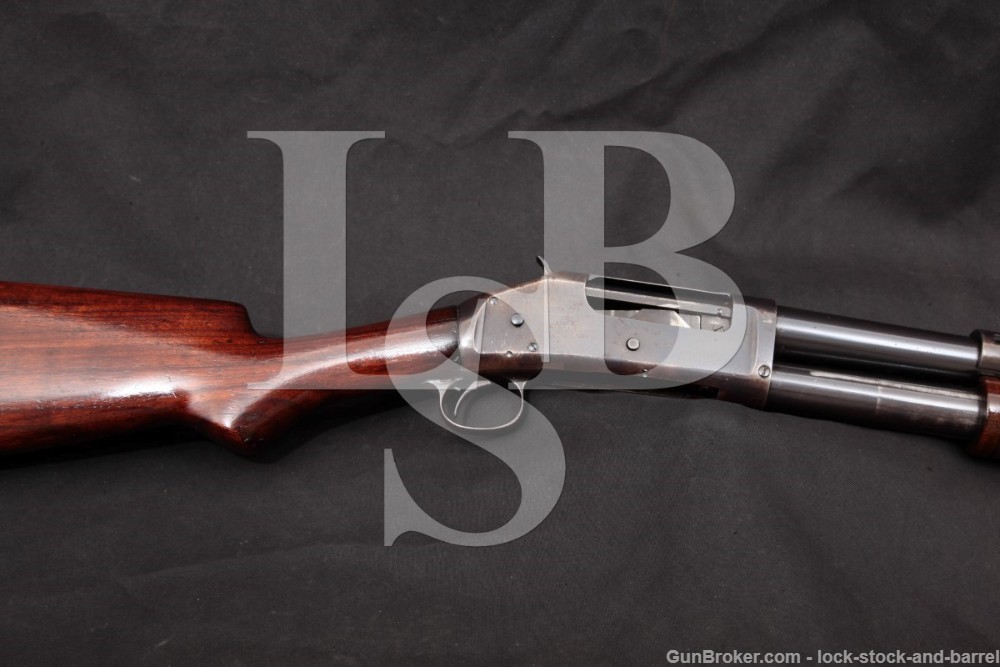 Stock Configuration & Condition: The stocks are two-piece walnut with a forend which has 18 grooves, straight comb, semi-pistol grip, checkered black hard rubber Winchester Repeating Arms Co. buttplate and sling swivels mounted to a plate in the belly and to the bayonet lug. The stocks have some scattered nicks, dings, scuffs and scratches. There are a few short, thin cracks around the front edge of the wrist and a repaired chip-loss at the toe. There is some adhesive residue around the repaired chip. The LOP measures 13 3/4″ from the front of the trigger to the back of the buttplate. The plate has wear around the edges, heavier at the heel and toe, and there is a repaired chip loss at the toe. The chip-repairs of the plate and stock appear to have been made with their original pieces. Overall, the stocks are in about Good-Very Good condition as repaired.

Bore Condition: The bore is mostly bright. There is some very minor erosion near the muzzle.

Overall Condition: This shotgun retains about 75% of its metal finish. The finish is thinning at all edges. The barrel has generally strong finish, protected by the heat-shield, with some wear at the muzzle and around the British proof marks which were struck through the finish. The magazine tube has strong finish in front of the slide handle with operational wear under and behind. There is also operational wear on the action bar, bolt, lifter and hammer. The receiver has scattered finish wear, most notable on the top. The heat shield has generally strong finish with most notable finish wear on the bayonet lug assembly, proper. Most areas of worn finish show discoloration from oxidation. There are scattered nicks, scuffs and scratches. There are tool marks around some screw and pin heads. The screw heads range from sharp to tool marked with strong slots. The markings are mostly clear, the “CYL” marking is poorly struck. Overall, this shotgun is in about Very Good condition.

Our Assessment: After observing the Great War for the first three years, it became clear to the U.S. that serious close-range firepower was needed in trench warfare. The Model 1897 Trench grade was an evolution of this idea. The pre-existing Winchester Model 1897 was modified by adding a perforated steel heat shield over the barrel which protected the hand of the user from the barrel when it became over-heated, and an adapter with bayonet lug for affixing an M1917 bayonet. They were so effective and brutal in combat that the German high command once announced they would execute any US soldier captured with one in his possession. The 1897 Trench Gun saw continued use in the second World War and after, a testament to the quality of the gun. This example appears to be an inter-war commercial production gun and, curiously, has British proof marks. Based on the production date, lack of a hole in the barrel for a bead sight, the post on the magazine cap for the bayonet lug and the factory “CYL” marking, not to mention the lack of any martial markings, it appears that there was someone in England so impressed by the trench guns’ performance that they had to have their own. It certainly would have been a comforting arm to have around if the Germans had ever invaded the home islands. This shotgun is in Very Good condition with some repaired damage to the stock, wear in the metal consistent with its age and intended use, a quite good bore and strong mechanics. Trench guns are nearly all collectible, and the commercial trench guns were even less common. A commercial trench gun with British proof marks has got to be one of the least common you’re going to find, so we’re sure this will take a prized place in a collection. Please see our photos and good luck!