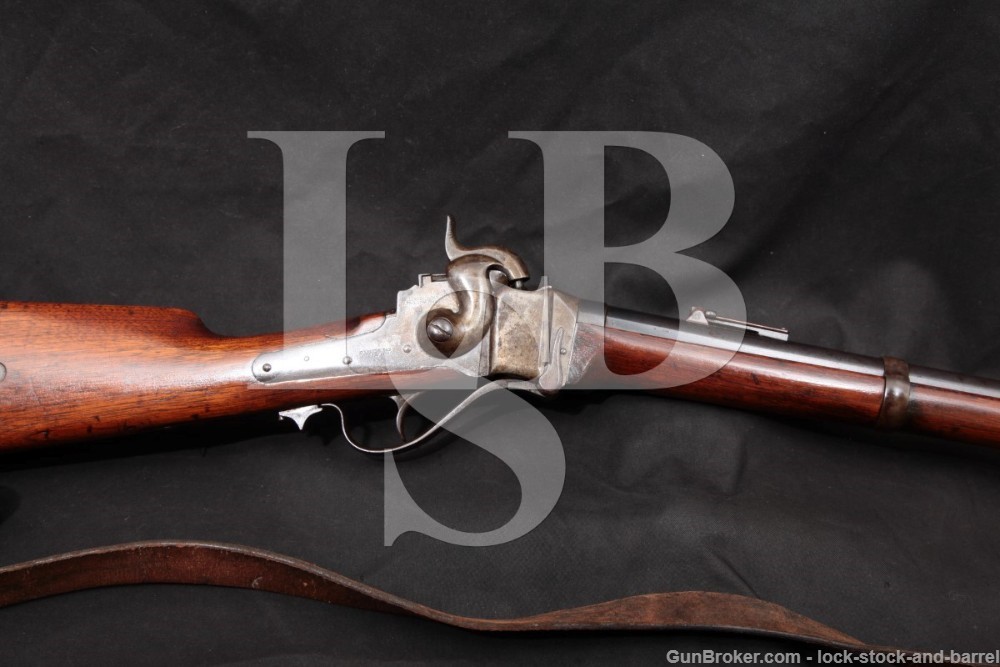 Stock Configuration & Condition: The stocks are two piece smooth walnut with three barrel bands and screw-secured forend with nosecap, straight grip, straight comb, patchbox, carbine-style metal buttplate, sling swivel in the belly and another on the middle barrel band. The stocks show moderate wear with discoloration from age and oil, scattered nicks, dings, scratches and scrapes. There are a few scattered very minor losses where the wood meets the metal, but no notable chips. The grain lines have opened slightly in some spots, but there are no notable cracks. The LOP measures 13 3/4″ from the front of the trigger to the back of the buttplate. The plate and patchbox have mostly gone to a light-moderate patina with some scattered solid erosion. Overall, the stocks are in about Very Good-plus condition as refinished Antique.

Finish Originality: Arsenal Refinished, we believe the barrel was replaced during the refurbish process.

Bore Condition: The bore is semi-bright with well defined rifling, mostly sharp. There is some scattered light erosion in the bore and infrequent minor pitting.

Overall Condition: This rifle retains approximately 35% of its metal finish. The exposed portions of the barrel are mottled with wear, light surface oxidation and infrequent solid erosion with strongest finish around the rear sight. The portion of the barrel covered by the forend has much stronger blue finish. The receiver’s case color has mostly muted with scattered surface oxidation, but there is some good figuring in protected areas such as the loading groove, around the hammer and around the trigger. The screw heads range from sharp to lightly disfigured with useable slots. The markings are generally clear, some inspection marks are worn and one of the stock cartouches (presumably the original cartouche) is also worn and not legible. Overall, this rifle is in about Very Good-Fine condition as refinished Antique.

Mechanics: The lever-lock is slightly loose, not properly retained by its push-button release. Otherwise, the action functions correctly. The hammer has a half-cock safety position. The flash-hole in the nipple is clear. This rifle retains provisions for the pellet primer system used on percussion rifles. The action appears tight and locks solidly. We have not fired this rifle. As with all used firearms, a thorough cleaning may be necessary to meet your maintenance standards.

Box, Paperwork & Accessories: Inside the patchbox is an old, oil-stained patch and a spare nipple. Also included is a brown leather sling, showing moderate wear, discoloration and some fraying.

Our Assessment: The Sharps New Model rifles and carbines were made in three models: 1859, 1863 and 1865. From Flayderman’s, over 100,000 of the 1859 and 1863 models were purchased by the U.S. Army and Navy during the Civil War. New Model 1863 Military Rifles were produced in 1865 at the tail-end of the war. Serial numbers for this model run from C30,000 to C40,000, with some overlap with other models. The Model 1863 reflected only minor improvements over the Model 1859 and this is a fairly early example which still retains the patchbox in the buttstock. This rifle is in about Very Good-Fine overall condition as refinished Antique. Its mix of worn and clear inspection stamps, two stock cartouches and the non-matching barrel indicate that the rifle was arsenal refurbished which may account for the quality of the bore and mechanics. The Sharps rifles and carbines represent a great period in the history of American firearms – they participated in the last great war in which percussion rifles were used, and many were converted to metallic cartridges soon after the war. These rifles are highly collected, primarily because there are so few still remaining in their original condition. This rifle should be no exception, and we expect it to find interest from the collectors. Please see our photos and good luck!

CA Legal or CA Private Party Transferable: This Antique percussion rifle can be transferred in California.