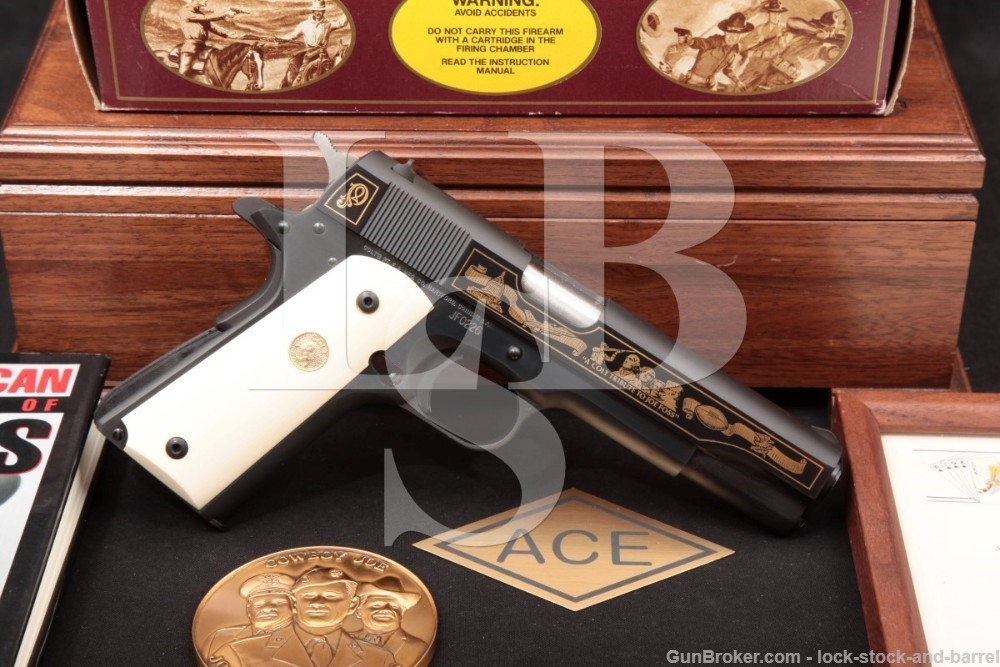 Markings: The left side of the trigger guard is marked “6” and “VP” in triangle, the right “C”. The right of the frame is marked “COLT’S PT. F.A. MFG. CO. HARTFORD, CONN. U.S.A. / JF0226”. The slide flats are deocrated in gold celebrating the life of Joe Foster, with the left side having borders surrounding Marine Aviator’s wings, a cannon, “JF” monogram in oval, Eagle, Globe & Anchor, F4F Wildcat, the Foss family home and rampant colt, the right has a Christian fish, South Dakota state capitol, F-16, hunter, Mount Rushmore, football, NRA logo and “”A COLT TRIBUTE TO JOE FOSS””.

Stock Configuration & Condition: The grips are two-piece smooth bone panels with gold colored Colt medalloins. The grips have no notable wear or damage, only light handling marks. There are no chips or cracks. Overall, the grips are in about Excellent condition as not original to the gun.

Overall Condition: This handgun retains about 99% of its metal finish. There is very faint handling and operational wear. The screw heads are sharp. The markings are clear. Overall, this pistol is in about Excellent condition.

Box, Paperwork & Accessories: This pistol comes with a single 7-round magazine, Colt branded Joe Foss American Hero presentation case with special bronze Joe Foss medallions, brass diamond “ACE” plate, serial-matching maroon cardboard Colt box, an assortment of factory paperwork including “stop-sign” hang-tag, a framed copy of a Colt letter of authenticity and a copy of Joe Foss’ autobiography “A Proud American”. The magazine has faint operational wear, intact feed lips and a strong spring, in about Fine condition. The book and letter have minor storage wear, in about Fine-plus condition. The cardboard box has some wear at edges and corners, in about Very Good-Fine condition, the factory paperwork is still secured to the styrofoam inserts by the red tape wrapping. The “ACE” plate has faint wear, in about Fine condition. The display case is walnut with red velvet lined french-fit interior. The outside of the lid has a Colt logo and “JOE FOSS / A COLT TRIBUTE / TO AN / ALL AMERICAN HERO” which text is found again on a brass plate on the interior of the lid. The case has some scattered scratches, scuffs, and general storage wear on the exterior with minor wear on the interior from the contents, in about Very Good condition.

Our Assessment: When you think of an “All American Hero”, you’re basically thinking of Joe Foss. Born in South Dakota in 1915 to a family living in a farm house without electricity, Joe decided early on that he wanted to be a Marine Aviator. Following the untimely death of his father, he helped his mother and sister to continue running the family farm despite horrific dust storms while continuing to pursue his education. He served in the 147th Artillery Regiment of the South Dakota National guard from 1939-1940 before finally acquiring both his pilot certificate and a college degree, whereupon he hitchhiked to Minneapolis to become a Marine Aviator. Initially being assigned to aerial photography due to his age, once the US had entered WWII he lobbied stubbornly to be transferred to a fighter squadron. This turned out to be quite the good choice as he was the first to match WWI ace Eddie Rickenbacker’s record of 26 kills, becoming the first “ace of aces” of WWII. After the end of the war, he continued to serve in the Air National Guard, later the Air Force, and would become both a Representative for and Governor of his home state of South Dakota. Not American enough? After serving as Governor, he would go on to be the Commissioner of the American Football League, host of ABC’s television series “The American Sportsman”, president of the NRA, as well as being a noted philanthropist. All of this will be seen in greater detail in the included copy of Joe Foss’ biography and the more you learn, the more this Colt 1911 tribute will be treasured by any American. Please see our photos and good luck!

CA Legal or CA Private Party Transferable (THIS SECTION DOES NOT APPLY TO OUT-OF-STATE RESIDENTS): This Pistol CANNOT be sold as a dealer sale in California but CAN be transferred as a Private Party Transfer (PPT) at our Simi Valley location. Out of state residents can disregard this section – your local laws apply.