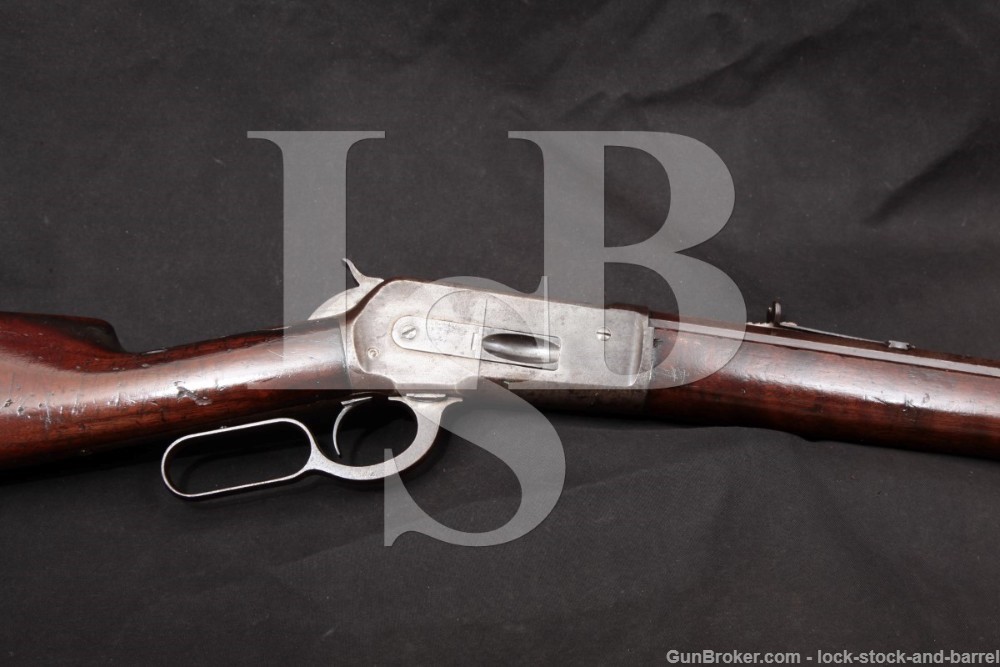 Bore Condition: The bore is gray. The rifling shows wear but is well defined where not interrupted by erosion. There is light erosion through the bore with less frequent light pitting.

Overall Condition: This rifle retains about 0% of its metal finish. The metal surfaces have gone to a light-moderate patina with scattered solid erosion, most on the barrel and magazine but with some on the receiver. There are tool marks on the barrel to each side of the magazine lug with peening on the lug at the dovetail. There are some scattered nicks, scuffs and scratches, most notable on the receiver flats. The action shows operational wear. The screw heads range from sharp to disfigured with useable slots. The markings are generally clear, some are slightly obscured by erosion. The serial marking is shallow, typical of early 1886 markings. Overall, this rifle is in about Good-Very Good condition as Antique.

Our Assessment: Winchester’s first attempt at a lever action rifle capable of handling a rifle cartridge was the Model 1876, which was a heavier framed version of the Model 1873. However, the toggle-link action used in the gun was still limited to short cartridges like the .40-60 and .45-60 Win. The Model 1886 was made to handle longer cartridges like the .45-70 Govt., and the .45-90 Win. and .50-110 Win. cartridges. The Model 1886 utilized a locked-bolt action that was much stronger than the M1876, and some think it is faster and smoother as well. The Winchester Model 1886 was touted as a lever action express model, capable of handling any of the North American game animals. This rifle is chambered in .40-82 WCF, one of the original chamberings for this model. It has a blade front sight and a semi-buckhorn elevator rear with the top tang drilled, tapped and filled to accept a peep sight (none included). The rifle was made in 1893, fairly early in M1886 production, made during the period when Winchester was producing the rifle with a case colored finish to the receiver, lever and nosecap, but the finish on this rifle has almost completely worn off. It is in about Good-Very Good overall condition as Antique, and the bore has some erosion and light pitting but the rifling is still mostly well defined. This rifle has seen some honest wear, but the action still functions and the bore is still shootable. The collectors should be very interested in this rifle. Please see our photos and good luck!