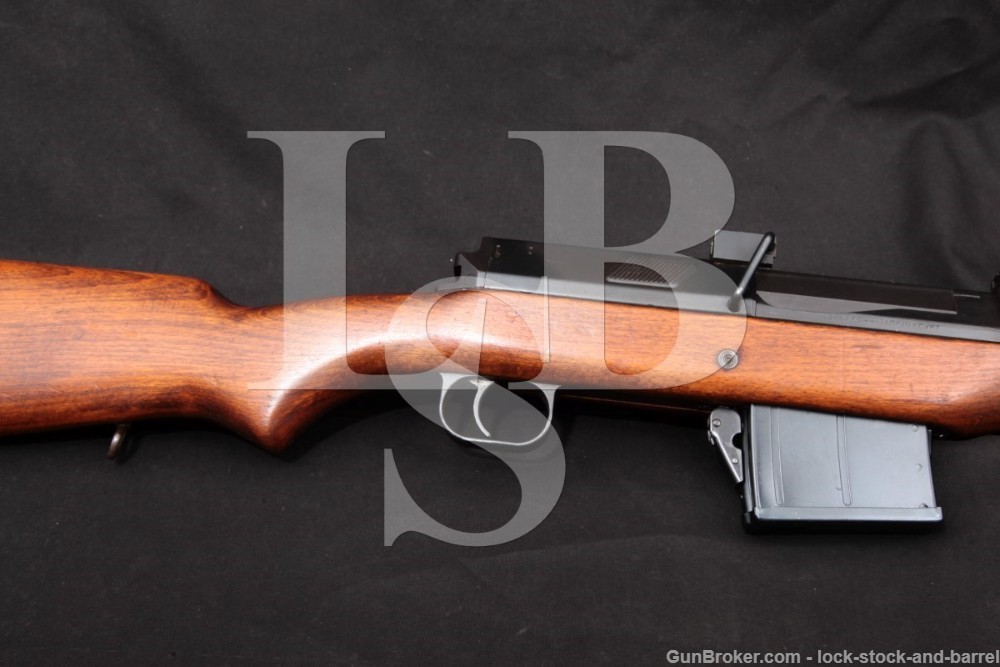 Sights / Optics: The front sight is hooded post set atop a raised base. The rear sight is a “U” notched blade attached to a sliding escalator assembly. It is marked with Arabic numbers.

Stock Configuration & Condition: The two piece hardwood stock has a pistol grip, finger grooves, metal nosecap, barrel band with sling bar, through bolt, sling loop under the butt, and a metal buttplate. The buttplate shows finish wear and some light marks. The wood shows several scrapes, scratches, and compression marks. There are no chips or cracks. The LOP measures 13 inches from the front of the trigger to the back of the buttplate. The stock rates in about Very Good Plus overall condition as refinished.

Overall Condition: This rifle retains about 92% of its metal finish. The metal shows several scrapes & scratches. The bolt body shows some thinning from cycling. The bottom metal screw heads show use but have strong slots. The markings are clear. Overall, this rifle rates in about Very Good Plus condition.

Our Assessment: This Egyptian Hakim rifle will make a collector very happy. It is a good looking semi automatic rifle with a strong bright bore. It is chambered in 8mm Mauser and can put 8mm down range as fast as you can pull the trigger.  It looks great (for its age) and is marked with clear Arabic script & numerals.
Here are some basics from Wikipedia:
“The Hakim Rifle is a gas operated semi-automatic rifle. It was originally designed by Sweden and produced as the AG 42 for the Swedish Army. The tooling and design were later sold to Egypt, and the Hakim was produced there during the 1950s and early 1960s. It was replaced in the mid-1960s by the Maadi AK-47 (a licensed copy of the Soviet rifle) but was stored in military reserve arsenals. In more recent years, it has been observed in use by some Egyptian police units. Around 70,000 were made…Egypt introduced an adjustable gas operated system, whereas the AG 42 had been non-adjustable…While the AG 42 fired the 6.5×55mm cartridge, Egypt owned large stockpiles of 8×57mm Mauser ammunition, much of it left behind from World War II. To take advantage of the large stockpile, the Hakim was further re-engineered to accept the larger cartridge, which also necessitated the addition of a permanent, non removable muzzle brake to help reduce the concurrent greater recoil.”

CA Legal or CA Private Party Transferable (THIS SECTION DOES NOT APPLY TO OUT-OF-STATE RESIDENTS): This C&R rifle can be transferred in California. All C&R firearms must be transferred through your local dealer OR at our Simi Valley location; we cannot ship directly to a C&R holder in California. Out of state residents can disregard this section – your local laws apply.