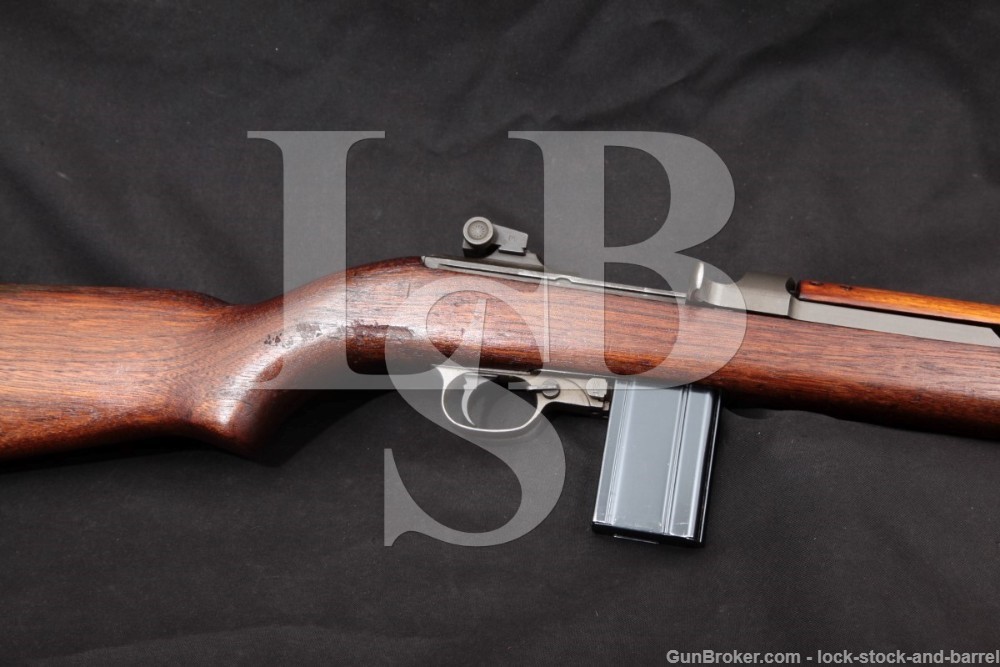 Stock Configuration & Condition: The oil finished hardwood stock has a pistol grip, Type III barrel band with sling loop & bayonet lug, sling well, sling pass through, and a metal buttplate. The buttplate shows a few scrapes and some light surface erosion. The handguard is lighter in color than the body of the stock. The wood shows several scrapes and scratches. Many have damaged portions of the surface wood. The most prominent marks are on the right side of the grip. The LOP measures 13 1/4 inches from the front of the trigger to the back of the buttplate. The stock rates in about Very Good Plus overall condition.

Overall Condition: This rifle retains about 97% of its metal finish. The barrel has areas of surface erosion showing through the new finish. The metal shows a small scrapes as well as light handling marks. The scrapes on the trigger guard are more prominent. The barrel shows a few spots of discoloration from oxidation. The right side of the receiver and the bolt show light thinning consistent with cycling. The markings are deep. Overall, this rifle rates in about Very Good Plus to Fine condition.

Box, Paperwork & Accessories: The rifle comes with one 15 round magazine that shows scrapes & a few small scratches. It is in about Very Good Plus condition.
The 15 round magazine is not available to residents of California or any jurisdiction with magazine capacity restrictions.

Our Assessment: This National Postal Meter (NPM) M1 Carbine was built back in 1943. At some point it was rebuilt using a mix of USGI parts but the Marlin barrel appears to be original. NPM did not make barrels. Marlin was one of the 3 companies that supplied NPM with M1 Carbine barrels. The metal was refinished nicely during the rebuild keeping most of the markings intact. This is a nice looking M1 carbine that will add to your collection.
Here is some interesting information on NPM from uscarbinecal30.com/manufacturers.html: “A week after America’s entry into WWII, National Postal Meter and the Todd Corporation partnered to start the Rochester Defense Corporation. It was this company that negotiated for the contract to produce M1 Carbines. Shortly after the approval of their 2nd contract, but before production started, Rochester Defense Corporation was dissolved and its assets merged into National Postal Meter. At the time of their first contract, the company had no tools, no employees, and no location for building carbines. National Postal Meter’s test fire range was built by raising the floor of the carbine manufacturing plant three feet above the buildings concrete floor and literally shooting under the feet of the production line…Performance testing gave them the highest rating in adverse conditions. (NPM) made no barrels…National Postal Meter Company changed the name of their company to Commercial Controls Corporation on April 26, 1944. The same month they ceased carbine production. The 239 Commercial Controls M1 Carbines were assembled from leftover parts and provided to U.S. Army Ordnance in August 1945.”

CA Legal or CA Private Party Transferable? (THIS SECTION DOES NOT APPLY TO OUT-OF-STATE RESIDENTS): This C&R rifle can be transferred in California. All C&R firearms must be transferred through your local dealer OR at our Simi Valley location; we cannot ship directly to a C&R holder in California. Out of state residents can disregard this section – your local laws apply.
The 15 round magazine is not available to residents of California or any jurisdiction with magazine capacity restrictions.