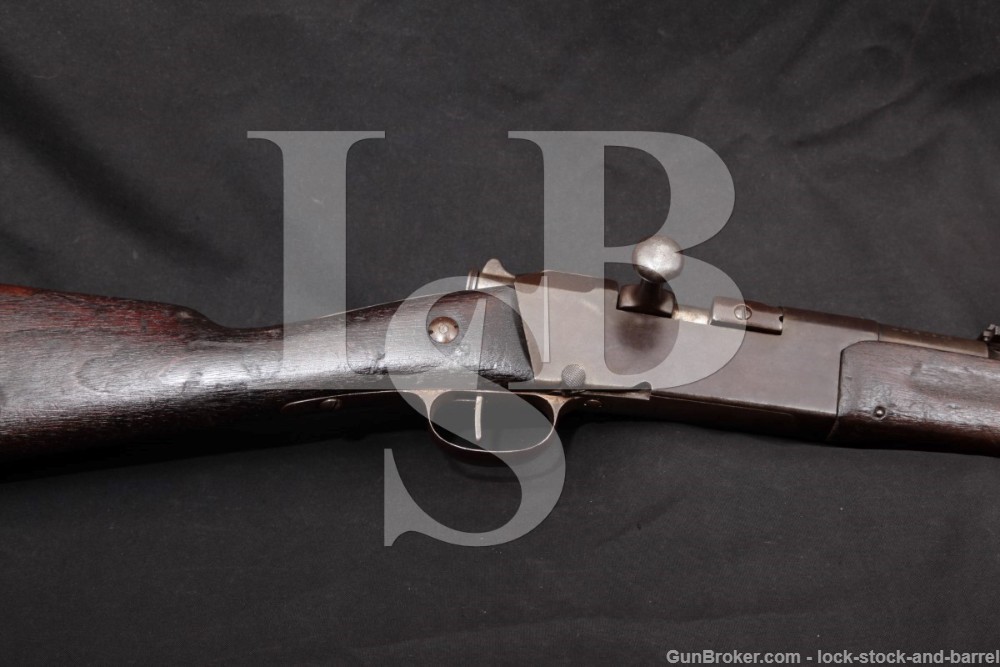 Sights / Optics: The front sight is a blade atop a small raised base. The rear sight is a “U” notched blade attached to a sight escalator when down. The left side of the rear sight base is marked from “4-8” for use with the escalator. When flipped up it becomes a sight ladder marked from “9-24”.

Stock Configuration & Condition: The two piece hardwood stock has a straight grip, finger grooves, barrel band, two sling loops, nosecap with stacking bar, through bolt, and a metal butt plate. The left side of the forearm, the finger grooves, the left side of the grip, and the top of the butt all show repairs. The buttplate and stock hardware show surface erosion and a brown patina. The wood shows several scrapes, scratches, and compression marks that have been finished over. The LOP measures 13 ¼ inches from the front of the trigger to the back of the butt plate. The stock rates in about Good to Very Good overall conditionals refurbished.

Bore Condition: The bore is dark. The rifling is deep, but worn at the muzzle. There is erosion throughout the bore.

Overall Condition: This rifle has lost most of its metal finish to oxidation. It shows scrapes, light surface erosion, and a brown patina. The barrel also has some paint residue on it. The screw heads show light use and oxidation. The receiver markings are faded. Overall, this rifle rates in about Fair to Good condition as refinished.

Mechanics: The magazine is missing its spring and follower. The action functions otherwise. The magazine tray and magazine cutoff function. This rifle was made without a safety. We have not fired this rifle. As with all previously owned firearms, a thorough cleaning may be necessary to meet your maintenance standards.

Our Assessment: This French Lebel Model 1886 M93 Infantry Rifle was made back in 1916. Unfortunately the magazine follower & spring are missing and the main receiver markings are faded. The rifle has finish issues but should clean up a bit. Luckily the rife can still put 8mm downrange. This rifle will add to a French or WWI collection.
Here are some basics on the rifle and its ammo from Wikipedia: “The Lebel Model 1886 rifle is also known as the “Fusil Mle 1886 M93”, after a bolt modification was added in 1893. It is an 8mm bolt action infantry rifle that entered service in the French Army in 1887. It is a repeating rifle that can hold eight rounds in its forestock tube magazine, one round in the transporter plus one round in the chamber. The Lebel rifle has the distinction of being the first military firearm to use smokeless powder ammunition. The new gunpowder, “Poudre B,” was nitrocellulose-based and had been invented in 1884 by French chemist Paul Vieille. Lieutenant Colonel Nicolas Lebel contributed a flat nosed 8 mm full metal jacket bullet (“Balle M,” or “Balle Lebel”). Twelve years later, in 1898, a solid brass pointed (spitzer) and boat-tail bullet called “Balle D” was retained for all 8mm Lebel ammunition. Each case was protected against accidental percussion inside the tube magazine by a primer cover and by a circular groove around the primer cup which caught the tip of the following pointed bullet. Featuring an oversized bolt with front locking lugs and a massive receiver, the Lebel rifle was a durable design capable of long range performance. In spite of early obsolete features, such as its tube magazine and the shape of 8mm Lebel rimmed ammunition, the Lebel rifle remained the basic weapon of French line infantry during World War I (1914–1918).”