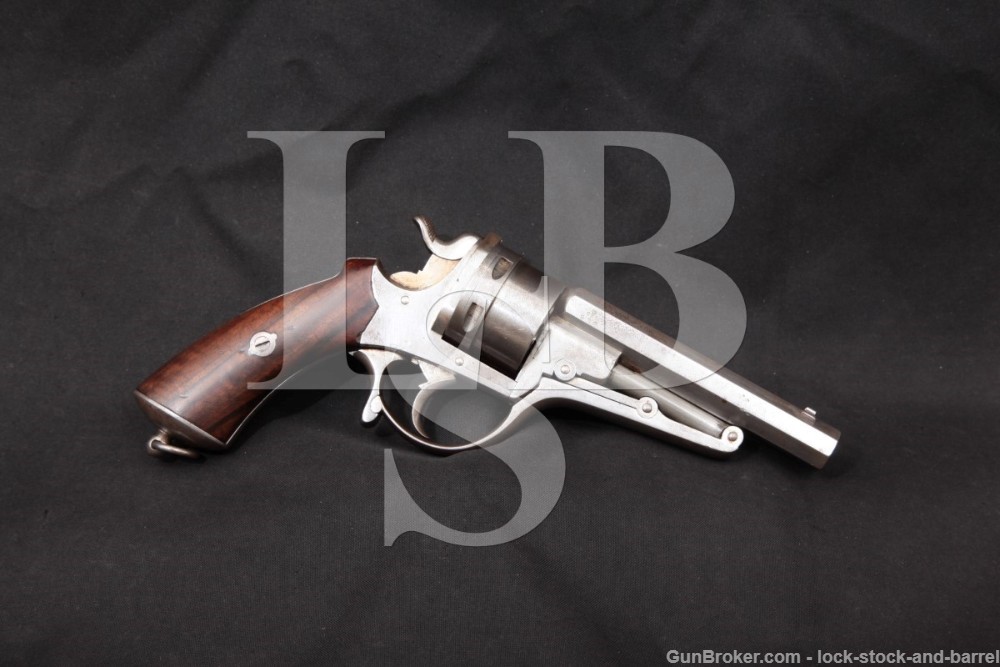 Markings: The left of the barrel is marked with crowned “C.F.G.” (Charles-Francois Galand) over “999”, the front face of the cylinder is marked “999” as is the top of the frame under the cylinder. The bottom of the barrel, inside of the lever, and recoil shield are each marked “841”. The cam-arm is marked “23”. The inside of the lever under the cam-arm, left of the release, right of the fronstrap and the lanyard stud are each marked “32”. The right of the fronstrap is marked “GN”. The front face of the cylinder is marked “JS”. The inside of each grip panel has “32” in pencil.

Sights / Optics: The front sight is a blade dovetailed to the front of the barrel. The rear sight is a “U”-notch at the top of the recoil shield.

Stock Configuration & Condition: The grips are two-piece smooth walnut. The grips have some scattered light nicks, dings, scuffs and scratches. There are no cracks. Overall, the grips are in about Very Good-Fine condition as Antique.

Finish Originality: There is evidence of heavy cleaning and maybe some polishing, but no evidence of refinishing.

Bore Condition: The bore is gray with well defined rifling. There is some scattered light erosion in the bore and infrequent minor pitting, mostly toward the muzzle-end.

Overall Condition: The metal surfaces show some scattered discoloration from oxidation, infrequent minor erosion, heavy cleaning and some areas have likely been polished. There are some scattered nicks, scuffs and scratches including a cluster on the left of the barrel above the forward lever hinge and another at the top of the frontstrap. The screw heads range from tool marked with strong slots to lightly disfigured with useable slots. The markings are clear. Overall, this revolver is in about Good-Very Good condition as Antique (see Mechanics)

Mechanics: The trigger return spring is a little weak, not consistently returning forward. Otherwise, the action functions correctly. The cylinder lockup shows moderate play when the hammer is cocked, less when the trigger is depressed. The double action trigger pull is relatively smooth and the single action trigger is crisp. We did not fire this handgun. As with all used firearms, a thorough cleaning may be necessary to meet your maintenance standards.

Our Assessment: Charles-Francois Galand was well ahead of his times. His 1868 patent for this revolver covers a system which automatically extracts all cases from the cylinder upon opening, exposing the entire cylinder for re-loading, as well as being both single and double action, at a time when Smith & Wesson was still producing tip-up single-action revolvers and Colt was still five years out from finishing the Single Action Army. There is a release lever which forms the rear of the trigger guard allowing the forward portion of the trigger guard to be used as a lever to cam the barrel, cylinder and extractor plate forward, the plate separating from the rear of the cylinder as it is opened. Truly ahead of its time, it was passed over by the French for the Chamelot-Delvigne due to the cost of production. Galand did manage to secure a contract providing the revolvers for the Russian Navy in 1870. There is some confusion regarding the designation of the cartridge with 11mm, 11.5mm and 12mm all being encountered in various references. The cartridge is specific to the revolver’s design with a thick rim which sits in the extractor plate. While never becoming the commercial success that the quality of the design deserves, it is still a wonderful example of a revolutionary revolver design, a great addition to an early cartridge revolver collection. Please see our photos and good luck!