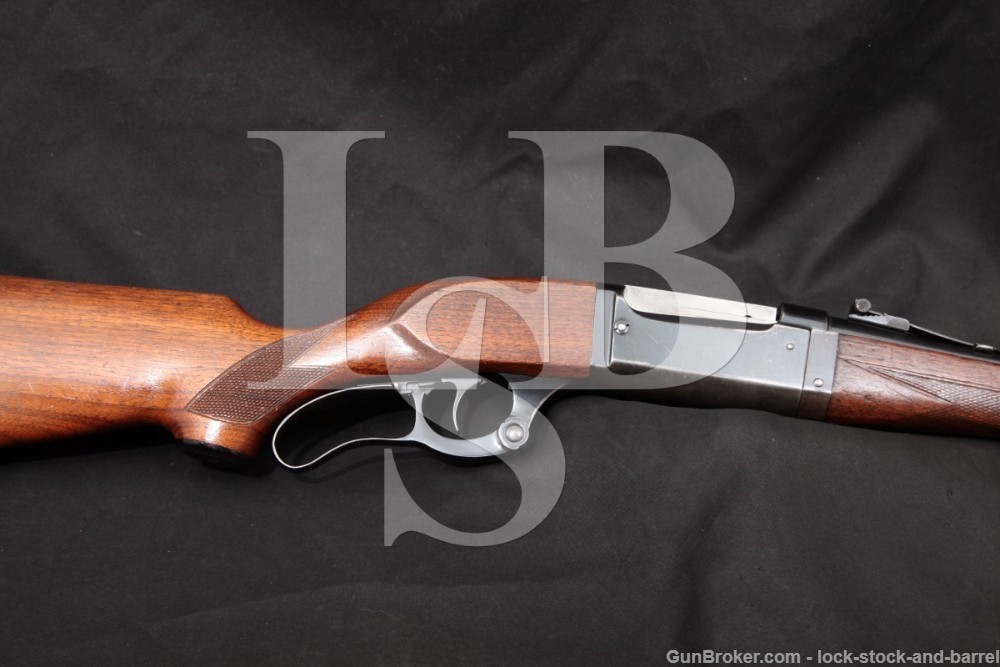 Sights / Optics: The front sight is a blade screwed to a slotted base integral to the front of the barrel. The rear sight is a an elevator sight adjustable for windage and elevation dovetailed to the rear of the barrel. The top tang is drilled and tapped for a receiver sight (none included). The top of the receiver has two pairs of drilled, tapped and filled holes for mounting a scope (none included).

Stock Configuration & Condition: The stocks are two-piece checkered walnut with schnabel forend, capped pistol grip, straight comb, and ventilated black rubber Pachmayr White Line recoil pad. The stocks have scattered light nicks, scuffs and scratches with more wear in the forend than the buttstock, most notable in the checkering which is generally sharp in the grip, smoothed in the forend. The buttstock has been relieved to the right of the top tang for a previously installed receiver sight. There are no chips or cracks. The LOP measures 13 1/8″ from the front of the checkered trigger to the back of the recoil pad, 12 1/4″ to the back of the wood. The pad has light wear and is still fairly supple. Overall, the stocks are in about Very Good condition as partially not original to the gun.

Bore Condition: The bore is mostly bright, the rifling is sharp. There is infrequent minor erosion in the bore, most toward the muzzle end.

Overall Condition: This rifle retains about 75% of its metal finish. The finish is thinning at all edges. The barrel has some scattered minor finish wear, light nicks and scratches, with some more defined finish wear on the bottom from the forend, concealed when assembled. The receiver has handling wear on the bottom, some scattered light nicks and scratches with light wear at the rear of the top tang from a previously installed receiver sight. There is infrequent scattered minor surface oxidation. The action shows light operational wear. The screw heads range from sharp to tool marked with strong slots. The markings are clear. Overall, this rifle is in about Very Good condition.

Mechanics: The action functions correctly. It has a safety on the right side of the receiver that locks the lever and the trigger. The lever locks up tightly. We did not fire this rifle. As with all used firearms, a thorough cleaning may be necessary to meet your maintenance requirements.

Our Assessment: The Savage 1899/99 model rifles have quite a history. They were preceded by the Model 1895, which was the first hammerless lever-action rifle produced. A hammerless action was useful as it reduces the lock time, allows the rifle to be fired more accurately and is less likely to jam in brush or snag in clothing. The 1895 and 1899/99 models used a rotary magazine to hold the cartridges, using a spring-loaded spool with grooves. The 1899/99 models added a counter to the spool to indicate how many rounds are loaded. This design allowed the use of spitzer bullets, which could not be used in the Winchester rifles of the times because the pointed tips in the tubular magazines could cause accidental discharge. This gave Savage a lead in producing rifles that could handle high velocity smokeless powder cartridges with bullets offering flatter trajectories than other lever-action designs. The .250-3000 Savage cartridge first came out in 1914, and was the first American cartridge to obtain a velocity of 3000 fps. To promote this new cartridge, Savage released it in a Deluxe Model, specific to this cartridge, that incorporated the most popular special-order features of prior years. The Savage Deluxe Model 1899 .250-3000 Savage rifle is a takedown model with a 22 inch barrel, checkered stock with pistol grip and grip cap, a Schnabel tipped forend and a checkered trigger. This rifle is in great mechanical condition for being more than 100 years old: the bore is mostly bright with sharp rifling and the lever locks-up tightly. This is a great find for the Savage 99 collectors. Although Savage chambered many of their models in caliber .250-3000 Sav., the .250-3000 Model was only made for seven years between 1914 and 1921, making it one of the rarest models. If the collectors don’t pay enough attention, this rifle will make a great deer rifle, offering a flat shooting trajectory similar to that of a .243 Winchester, and is great for those who can’t stand a lot of recoil. Please see our photos and good luck!