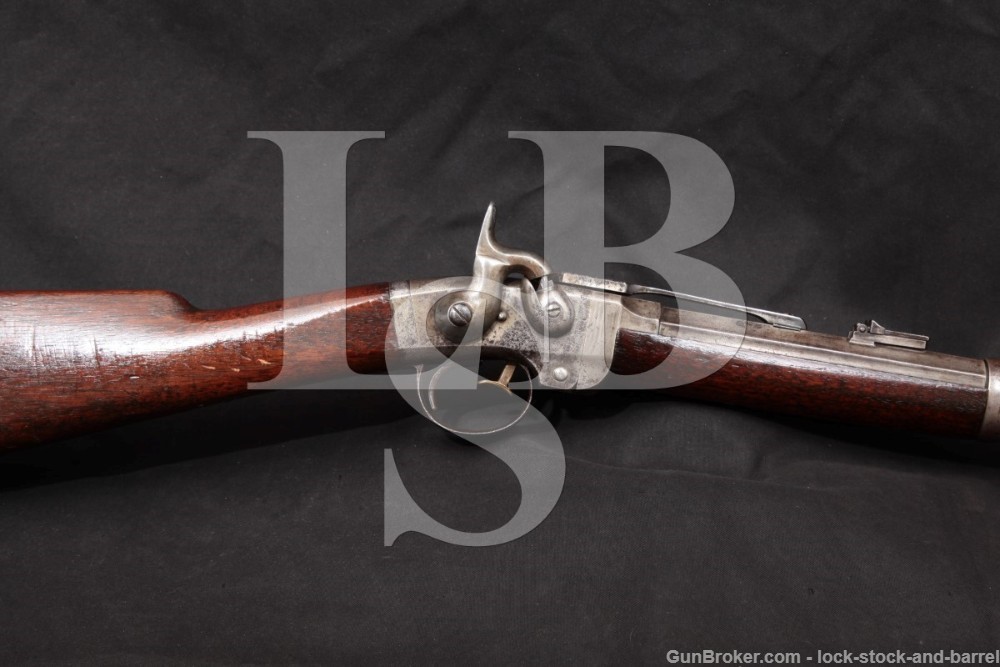 Stock Configuration & Condition: The stocks are two piece smooth walnut with banded forend, straight grip, straight comb, and steel carbine-style buttplate. The stocks have several scattered nicks, dings, scuffs, scrapes and scratches. There is some minor loss at the rear edge of the buttstock around the plate. There are no cracks. The LOP measures 14 3/8″ from the front of the trigger to the back of the buttplate. The plate has developed a moderate patina with some scattered spots of solid erosion. Overall, the stocks are in about Good-Very Good condition as Antique.

Type of Finish: The finish was original blue and case color. The only finish remaining is case color on the interior of the breech assembly.

Finish Originality: Remaining finish is original, nearly all of the external finish has been worn/polished away.

Bore Condition: The bore is bright with sharp rifling. There is no erosion in the bore but there is a nick visible in the top of the bore approximately under the rear sight.

Overall Condition: This rifle retains about 5% of its metal finish. There is case color still showing on the inside of the breech assembly. Otherwise, the metal surfaces have been worn or polished bright with scattered minor surface erosion and discoloration of oxidation. There are a few light nicks and scratches. The screw heads range from sharp to lightly disfigured with useable slots. The markings are mostly clear. Overall, this rifle is in about Very Good condition as Antique.

Mechanics: The action functions correctly. The nipple is free of erosion and the hammer has a half cock safety position. The barrel lockup is solid. We have not fired this rifle. As with all used firearms, a thorough cleaning may be necessary to meet your maintenance standards.

Box, Paperwork & Accessories: This rifle has a sling bar with a saddle ring mounted to the left side of the receiver.

Our Assessment: This is a nice Smith Carbine made by the American Machine Works during the Civil War. The Smith Carbine was unique in that it broke apart in the middle for loading and used rubber cartridges that sealed the gases in the breech, which helped to give it good accuracy compared to some of the other breechloading rifles of the era. The downside was that the rubber cartridges were hard to remove from the chamber after firing. The carbines were built by three different companies. The distributor’s name was Poultney and Trimble, which was stamped on the left side of the receiver and sometimes mistaken for the maker. Over 30,000 of these carbines were built, and were issued to at least 10 Union Cavalry regiments. This example has lost most of its exterior finish and shows wear in the stocks which could be considered light for a rifle issued in the Civil War. There is still case color showing on the interior of the breech assembly and the bore is in shockingly good condition. The barrel lockup is solid. Despite being one of the more common breech-loading carbines issued in the war, we don’t see too many Smiths come through for auction. This is sure to find a spot in a collection of Civil War martial arms. Please see our photos and good luck!