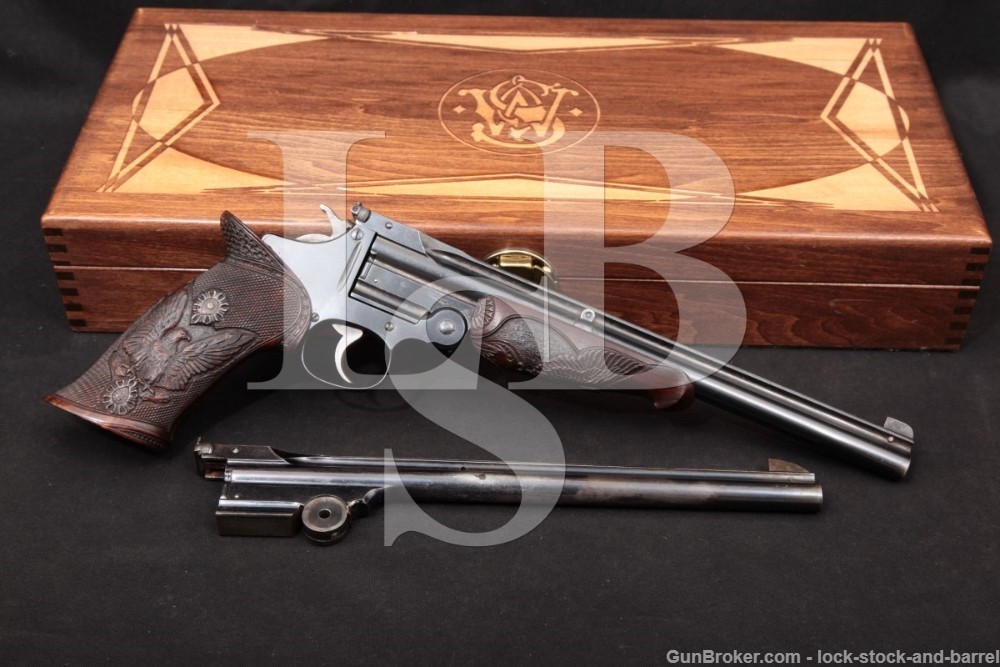 Barrel Length: Each barrel is 10″.

Sights / Optics: The front sight of the .22 barrel is a blade pinned to the front of the rib, the rear sight is a square notch mounted in the barrel latch, adjustable for windage using a screw on each side of the latch.

The front sight of the .38 barrel is a blade pinned to the front of the rib, the rear sight is a square notch adjustable for windage using two screws on the rear face of the latch assembly.

Stock Configuration & Condition: The stocks are three-piece walnut, elaborately carved and checkered with a schnabel forend and two-piece pistol grip with prominent thumb-shelf. The carvings include an eagle on the forend, another on the right grip panel, a dragon on the bottom of the thumb-shelf, a face on the bottom of the grip which goes across the seam between panels, and decorative border carving around the ccheckering, grip screws and animals. The forend has only a few scattered light marks. The right panel has a crack in the front edge which extends back into the checkering. Otherwise, the pistol grip has only some scattered minor marks. The checkering and carving is well defined. Overall, the stocks are in about Very Good-plus condition.

Bore Condition: The .22 bore is bright and the rifling is sharp. There is no erosion in the bore.

The .38 bore is mostly bright with sharp rifling. There is some minor erosion just in front of the chamber.

Overall Condition: This pistol set retains about 70% of its metal finish. The .22 barrel and the frame have generally strong finish with some scattered nicks, scuffs and scratches. Most of the marks through the finish show discoloration from oxidation and there is some other scattered minor surface oxidation. The case color of the hammer and trigger show operational and handling wear with some scattered surface oxidation. The .38 barrel has some more notable finish loss, appearing to have had surface erosion scrubbed out. The rib has had a hole drilled in it for the forend’s mounting bracket. The matting on the top of the rib appears to have been applied through the finish. The barrel lug has been modified to fit the 3rd Model frame with the relieved areas left in the white. The screw heads range from sharp to disfigured with useable slots. The markings are mostly clear, the .38 barrel’s markings are partially obscured by the matting. Overall, this pistol is in about Very Good condition as assembled.

Mechanics: The action functions correctly. The pistol can be shot in either single action or double action modes. The ejectors work properly, however the forend stops the barrels from being rotated open all the way to snap the ejector back. The barrel lockup shows barely perceptible play on each barrel. We did not fire this handgun. As with all previously owned firearms, a thorough cleaning may be necessary to meet your maintenance standards.

Box, Paperwork & Accessories: The pistol comes in a custom wood display case with S&W logo on the exterior of the lid, tan felt french-fit interior, a plate on the inside of the lid marked “SMITH & WESSON / THIRD MODEL PERFECTED TARGET PISTOL / SR. No. 9744 / CALIBER .22 LR WITH EXTRA / BERREL .32 S&W / MFG YEAR 1919”. There is an S&W monogram pin stuck on the interior tray portion. The case shows light storage wear on the exterior with faint wear on the interior from the contents, in about Fine condition.

Our Assessment: This is an S&W Third Model Perfected Target Pistol that was made in 1919. It is a single and double action, single shot top-break pistol that has a pair of long 10” barrels, one chambered for .22 LR and the other for .38 S&W. The .38 barrel is from a First Model, but has been modified to function on the Third Model frame and though neither barrel is serialized to the frame, they both lock up well. The pistol is in about Very Good condition with about 70% of its finish remaining. Both bores are strong and the mechanics are solid. The pistol has been equipped with a beautiful set of checkered and carved stocks which give the pistol a very unique appearance. This pistol also comes with a nice custom-made display case fit for both the pistol and extra barrel. This is a very nice find for the collectors of early S&W handguns and top breaks in general and may even still serve as a fun target pistol. Please see our photos and good luck!