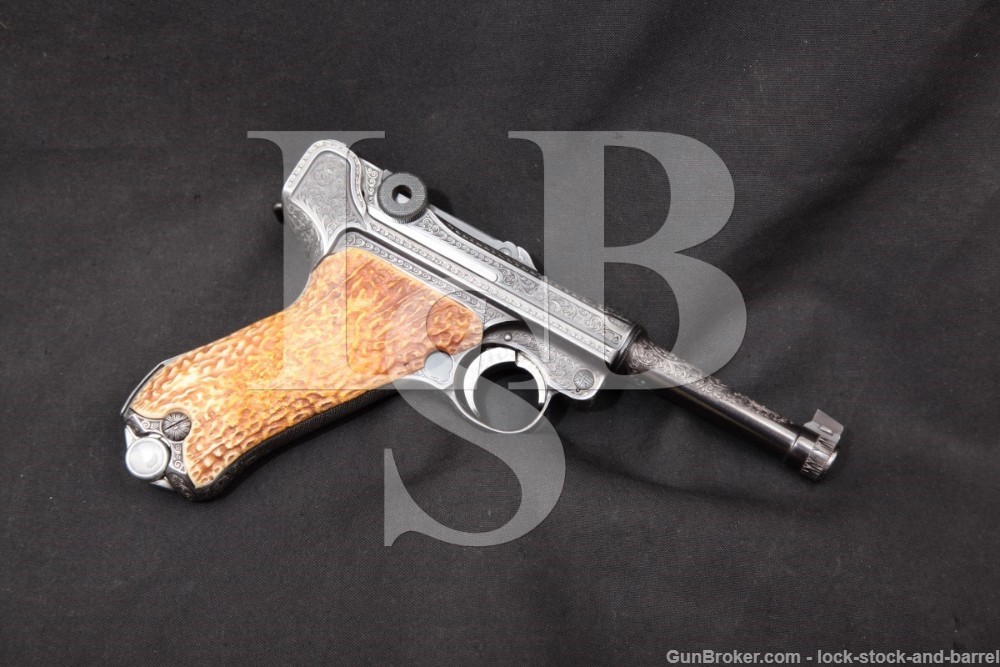 Markings: The barrel extension is marked “1936” on the chamber ring, the left is marked “9388”. The sear is marked “88”, found again on the toggle pin, left of the breech-block, left of the firing pin, takedown lever, trigger, safety, and bolt stop. The left of the extractor is marked “GELADEN”. The front face of the frame is marked “9388 / g”. The pistol has extensive German scroll and border relief engraving with checkering in the grip straps. Some original markings appear to have been covered with engraving while others are cleverly bordered or incorporated into the engraving design. The rear of the frame, above the lanyard loop, is engraved “KURT JAEGER / MAINZ”.

Sights / Optics: The front sight is a blade dovetailed to a base at the muzzle. The rear sight is a “V”-notch itnegral to the rear toggle link.

Stock Configuration & Condition: The grips are two piece stag panels. The grips show light handling wear with no notable damage. It is unclear if the grips are discolored or if it is just the natural coloring, please see photos. There are no chips or cracks. Overall, the grips are in about Fine-Excellent condition.

Bore Condition: The bore is gray with well defined rifling. There is light erosion and minor pitting scattered in the bore.

Overall Condition: This pistol retains about 80% of its current metal finish. The finish is thinning at all edges. The most notable finish wear is in the grip straps, the left-front of the frame and the top-rear of the barrel. The sides of the grip frame have some pitting under the finish, concealed with the grips installed. The screw heads are lightly tool marked with strong slots. The markings are generally clear, some are worn. Overall, this pistol is in about Very Good condition as refinished.

Box, Paperwork & Accessories: This pistol comes with a single 7-round tin-plated magazine with an alloy floorplate. The magazine has light operational wear, some scattered minor surface oxidation, intact feed lips and a strong spring, in about Very Good condition.

Our Assessment: The Luger (Pistole Parabellum or P-08) is perhaps the most aesthetically and ergonomically pleasing of all autoloading centerfire pistols. It is also one of the strongest, most accurate and most recognizable service pistols ever made. Georg Luger developed his famous pistol in 1898-1899 (starting with the Borchardt/Luger transitional pistol). The Luger is, essentially, a much improved Borchardt type pistol, which was itself based on the toggle action concept used by Sir Hiram Maxim in the world’s first practical machine gun. The Maxim shot its way to bloody fame in World War One, which also became the combat proving ground for the Luger Pistol. The Luger was so reliable and well liked that it was still being made and issued to German troops well after the P38 was adopted by the army. The largest percentage of Lugers were made by DWM, which became Mauser in 1930. While still pretending to comply with the Treaty of Versailles, Mauser-produced Lugers used a date code to obscure when they were made and by whom and once war broke out, codes were again used to obscure production numbers, but there was a brief period of time, starting in 1936, when Mauser blatantly marked the manufacture year on the chamber ring of their Lugers. This is a Mauser Luger pistol manufactured in 1936 and it still retains its defiant year marking. Remaining serial number markings on the pistol are matching. The pistol is in about Very Good condition as refinished, with about 80% of its current finish remaining. The bore is semi-bright with well defined rifling and light erosion. As interesting as this pistol is for its place in history, it is also a beautifully engraved piece, with the work done by Kurt Jaeger. Mr. Jaeger himself is interesting for his place in history. His father was a gunmaker who specialized in sporting guns, production of which nearly ceased during the war years. Due to his mother’s Jewish heritage, Kurt’s other employment options were limited and he was eventually drafted into the German army. He was wounded, captured and spent some time in an American POW camp before being released. After the war he was finally allowed to marry and have a family, a right denied under the Nazi government, but the Jaegers soon found that communism was scarcely an improvement. Escaping from their home in Suhl, the Jaegers settled in Mainz where his nephew had earlier escaped. Working for the Weisbaden Rod and Gun Club for the American Air Force. Kurt was able to work engraving firearms for the local Air Force servicemen and, eventually, would be able to sell engraved arms to German citizens, too. This example of his work is quite a beauty with its distinctive German scroll engraving set off by a beautiful pair of stag grip panels. This will make an excellent display in a collection of Lugers or engraved firearms. Please see our photos and good luck!