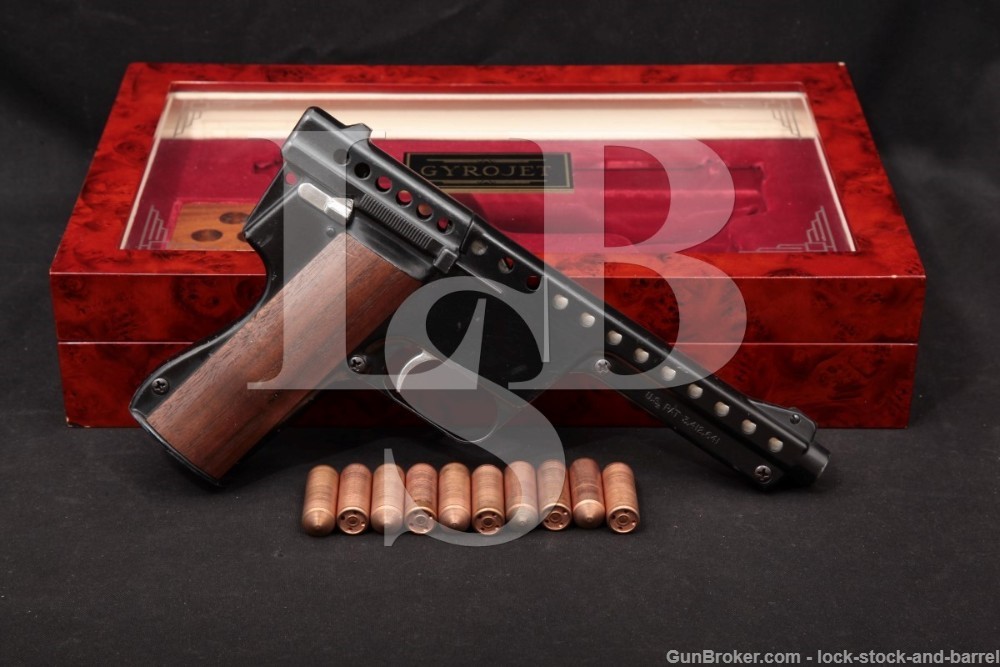 Sights / Optics: The front sight is a blade pinned to a slotted, ramped base integral to the frame at the muzzle. The rear sight is a square notch integral to a boss at the top-rear of the slide.

Stock Configuration & Condition: The grips are two-piece smooth walnut panels. The grips have a few scattered light scuffs and handling marks with small knot holes on the right panel near the front edge toward the bottom. There are no chips or cracks. Overall, the grips are in about Fine condition.

Bore Condition: The bore is bright with well defined grooves. There is no erosion.

Overall Condition: This pistol retains about 96% of its metal finish. There are a few scattered light nicks and scuffs in the frame and slide’s black finish. The action shows minor operational wear. Otherwise, there are only light handling marks. The screw heads are undamaged. The markings are clear. Overall, this pistol is in about Fine condition.

Box, Paperwork& Accessories: This pistol comes in a custom wood display case with glass lid, french-fit red velvet interior, cartridge block with ten 13mm cartridges (these are not the correct cartridges for this model) and an inset printout from MB Associates about the cartridges. The lid of the case has a plate on the exterior marked “GYROJET” and another on the interior marked “GYROJET / MARK II MODEL C / SR. NO. 193 / CALIBER 12MM GYROJET / MFG YEAR 1968”. The exterior of the case shows minor storage wear, the interior has very minor wear from the contents. The bracket around the cartridge information is worn, but this appears to be original to construction. The cartridges show faint wear. Overall, the case is in about Fine condition.

Our Assessment: Who doesn’t want a hand-held rocket launcher? Astonishingly light at just over one pound, the MBAssociates Mark II Model C Gyrojet pistol is a 6-round semi-automatic handgun which fires a rocket cartridge. The cartridge design actually hearkens back to one of the earliest self-contained cartridges, the rocket-ball. With all of the propellant contained in the cartridge, a fixed firing pin is ignited when the hammer strikes the front of the cartridge. Once ignited, the burning propellant comes out of angled ports at the rear of the cartridge, spinning the entire assembly to stabilize it as it accelerates down the bore. Unlike traditional cartridge firearms, the projectile continues to accelerate for up to 20 yards after leaving the bore, reaching its highest velocity not at the muzzle, but when the propellant is exhausted. This design was not only quieter than a traditional cartridge, the firearm could be made extremely light as it did not have to contain much pressure, and it would work under water (in theory). The earliest Gyrojet firearms were made with a 13mm cartridge, but the Gun Control Act of 1968 would impose a one-half inch diameter limit on firearms, otherwise they would be considered a Destructive Device. Following this, MBAssociates introdcued a 12mm cartridge shortly before going out of business. This example has some minor wear in about Fine condition and comes with a beautiful display case. The case is fit for the pistol, a cartridge block and a printout with a description of the cartridges. The included cartridges are 13mm, not 12mm, so they can’t be fired, but they display well in the walnut block. This will make a great addition to any collection and if you can find some ammo for it, it ought to be a blast to shoot. Please see our photos and good luck!