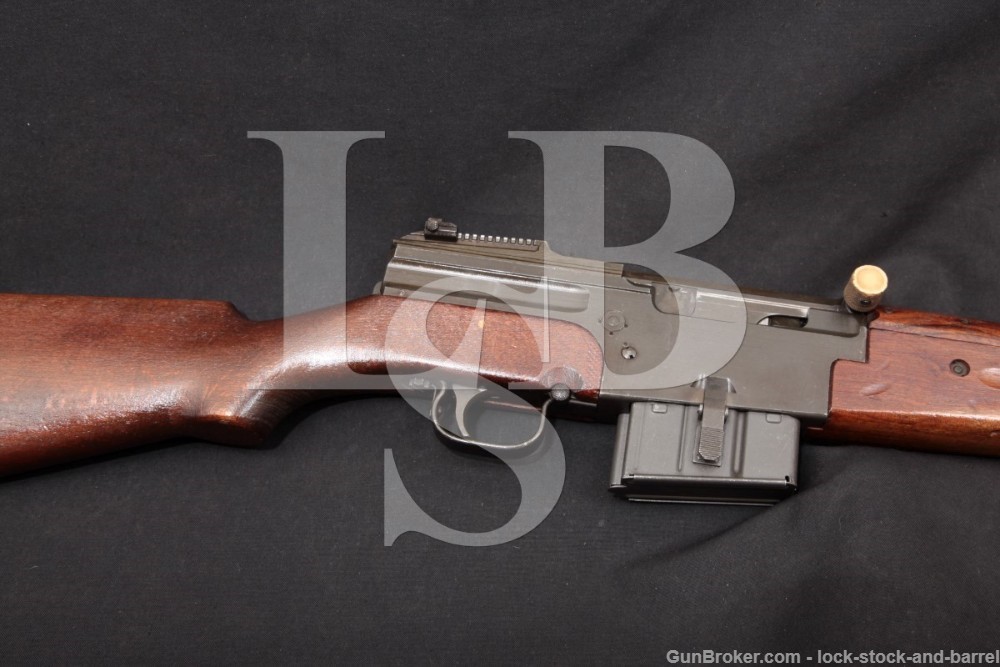 Action Type: Semi-Automatic with Detachable Magazine. The front of the bolt body has an integral stripper clip guide.

Sights / Optics: The front sight is a tall post set under a protective hood. The rear sight is an aperture attached to a sliding escalator. It is marked from “2-12”.

Stock Configuration & Condition: The hardwood stock has a pistol grip, finger grooves, metal nosecap with stacking loop & hole for the included bayonet, barrel band with sling ring, sling bar, sling well, and a metal buttplate. The buttplate shows scrapes, scratches, and some thinning. The wood shows several scrapes, scratches, and compression marks. Most of these marks are small. Many of these marks have damaged small portions of the surface wood. The LOP measures 13 inches from the front of the trigger to the back of the buttplate. The stocks rates in about Very Good Plus overall condition.

Overall Condition: This rifle retains about 93% of its current metal finish. The metal shows scuffs, light scrapes, and some small scratches. It also shows areas of discoloration. The right side of the receiver shows thinning from the magazine latch. The right side of the bolt shows some thinning from cycling. The screw heads show moderate use. The markings are clear. Overall, this rifle rates in about Very Good Plus condition.

Box, Paperwork & Accessories: The rifle has a spiked bayonet stored backwards under the barrel. It shows light scrapes and is in about Fine overall condition. This rifle includes one 10-round magazine. The magazine shows scrapes, small scratches, and light thinning. It is in about Very Good Plus condition.

Our Assessment: This French MAS MLE 1944 is a Rare French Military Rifle as only around 6,200 were made. It looks great for a 75 year old Military service rifle. The rifle comes with a spiked bayonet and a 10 round magazine. It will add nicely to your collection. Here is an explanation of the low MLE 1944 production numbers from virdea.net/french/mas-auto.html: “In the winter 1945 the French military had a military establishment that was rapidly trying to rebuild and re-equip itself. Its military structure contained 13 Foreign Legion and Free French divisions rapidly re-equipping with and initial American donation of 50,000 Garand rifles and 75,000 M1 Carbines, 6 Colonial divisions equipped with approximately 60,000 Berthier and M1936 rifles and carbines, tens of thousands of Enfield and M1903 rifles in .30 M2, and huge assortment of smaller units forming or reforming from resistance groups and soldiers released from captivity. There was even a considerable use of captured war stock with German K98 rifles in 8mm Mauser serving alongside French rifles in 7.5 and 8mm Lebel and American rifles in .30 M2 and .30 Carbine. This huge number of rifles on-hand stopped the initial plans to issue the MAS Mle 1944 en masse to the military. Instead production of the cheaper Mle 1936 went ahead since this rifle was already in service in quantity. MAS Mle 1944 production was ended a few months after the war stopped. Despite this the weapon’s design turned out to be a complete success among units equipped with it. The limited production run of rifles would serve in combat with the Marine Commandos in Indochina starting in 1946 where it gained a reputation for reliability. It was also carried on French warships through the 1980s in the version of the updated MAS Mle 44A”.