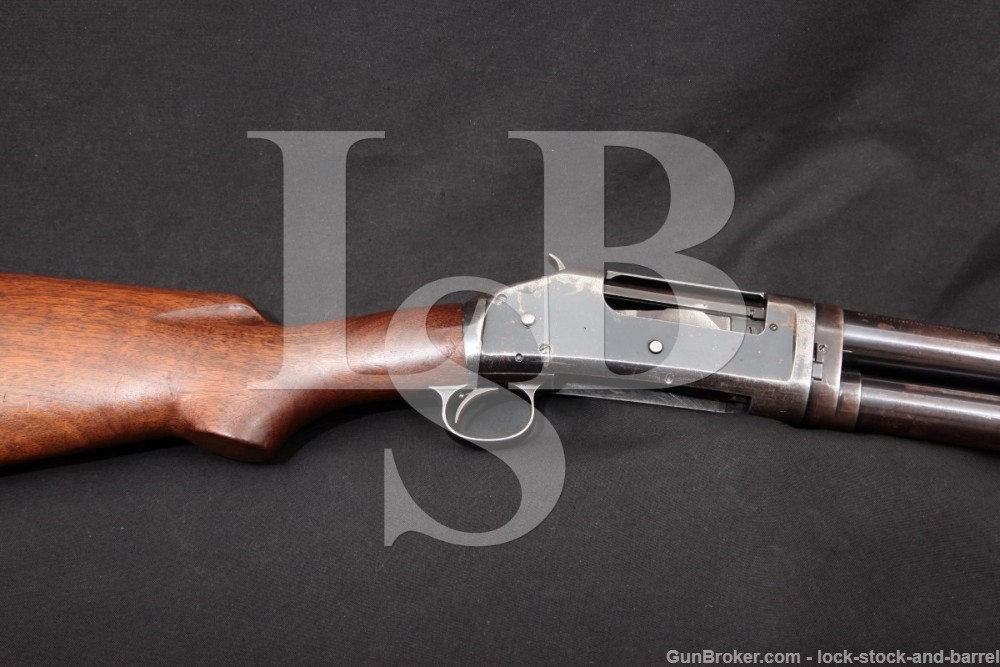 Sights / Optics: This shotgun is mounted with a brass bead on the bayonet lug. There is a hole for a bead on the exposed portion of the barrel in front of the lug, it has been filled.

Stock Configuration & Condition: The stocks are two-piece walnut with a forend which has 18 grooves, fluted low comb, semi-pistol grip, checkered black hard rubber Winchester Repeating Arms Co. buttplate and sling swivels mounted to a plate in the belly and to the bayonet lug. The sling plate in the belly has the dimensions of WWII issue trench guns, but the stock does not have the Ordnance cartouches which should be present on a trench gun in this serial range. The stocks several scattered light nicks, scuffs and scratches with thinning finish in the grip areas. There is a tiny loss at the front edge of the sling plate. Otherwise, there are no chips or cracks. The LOP measures 13 1/2″ from the front of the trigger to the back of the buttplate. The plate has light wear around the edges and a spot of compressed checkers at the toe. Overall, the stocks are in about Very Good condition as not original to the gun.

Bore Condition: The bore is bright with no erosion. There are small bumps visible in the bore which line up with the bayonet lug mounting bolts.

Overall Condition: This shotgun retains about 70% of its metal finish. The finish is thinning at all edges. There are several nicks, scuffs, and scratches scattered throughout. There is a ding on the outside edge of the muzzle on the right. There is handling and operational wear and some worn areas show discoloration from oxidation. There are scattered spots of minor surface oxidation with infrequent light surface erosion. Most of the erosion is on the right of the receiver along the top edge of the flat and the front edge, this erosion has been scrubbed with the surrounding areas bright. There is also erosion on the bottom of the lifter which still shows discoloration from oxidation. There are tool marks around some screw heads. The screw heads range from sharp to tool marked with strong slots. The markings are clear. Overall, this shotgun is in about Good-Very Good condition as assembled.

Our Assessment: After observing the Great War for the first three years, it became clear to the U.S. that serious close-range firepower was needed in trench warfare. The Model 1897 Trench grade was an evolution of this idea. The pre-existing Winchester Model 1897 was modified by adding a perforated steel heat shield over the barrel which protected the hand of the user from the barrel when it became over-heated, and an adapter with bayonet lug for affixing an M1917 bayonet. They were so effective and brutal in combat that the German high command once announced they would execute any US soldier captured with one in his possession. The 1897 Trench Gun saw use again in the second World War and after, a testament to the quality of the gun. This example appears to have been assembled with a genuine WWII trench or riot gun receiver, but the barrel assembly is from an inter-war production gun and has since been converted to a Trench Gun-style assembly. Based on the hole in the barrel for a bead sight and the factory “CYL” marking, it is likely that the barrel assembly was originally sold as a riot-style shotgun either commercially or to the Omaha Police Department. Other examples of Omaha PD trench guns have been seen in the same serial range as that marked on the barrel assembly, and its possible that the receiver was acquired by OPD post-war when many of the military Riot and Trench guns were surplused out to law enforcement agencies across the country. The gun shows wear consistent with decades of use in military and/or law enforcement but retains a good bore and strong mechanics. This will make a nice display piece and placeholder for a genuine trench gun in a WWII or US small arms collection, it may also be a nice addition to a collection in Nebraska. Please see our photos and good luck!