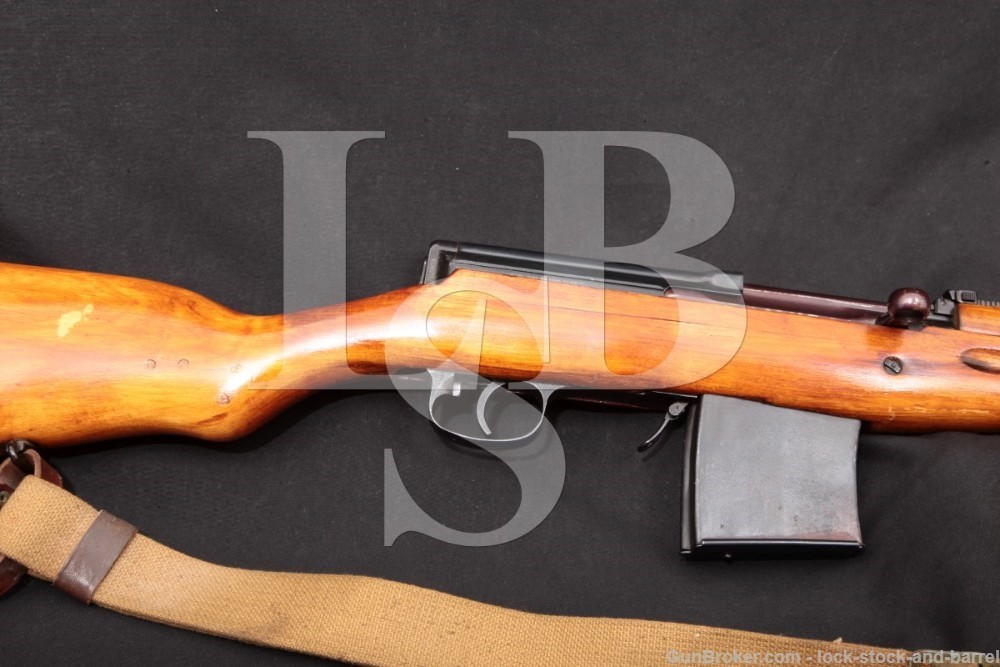 Sights / Optics: The front sight is a hooded post. The rear sight is a “U” notch blade assembly attached to a sliding escalator that is marked from “1 – 15”. Both sides of the receiver are slotted at the rear in order to accept a scope base & optic.

Stock Configuration & Condition: The two piece, gloss finished hardwood stock has a pistol grip, finger grooves, ventilated handguard, ventilated metal nose caps with sling loop, through bolt, sling loop under the butt, and a metal buttplate. The refinished buttplate has surface erosion showing through the finish. It is touched up with black paint and shows scrapes. Both sides of the stock show large edge wood repairs below the receiver. The wood shows several scrapes & scratches. Many of these marks have damaged portions of the finish. The LOP measures 13 inches from the front of the trigger to the back of the buttplate. The stock rates in about Very Good Plus to Fine overall condition, as refurbished.

Bore Condition: The grooves and front of the bore are dark. The rifling is deep; less pronounced near the muzzle. There is erosion in the bore, mostly in the grooves.

Our Assessment: This Russian SVT 40 was made back in 1941 at the Tula Arsenal. The metal has been refinished and the stock has been refurbished so the rifle looks impressive. This WWII semi automatic service rifle has seen some use but it looks great and most of the markings are deep. The markings add to its history. This Russian SVT 40 Tokarev will add nicely to a WWII or Military collection.