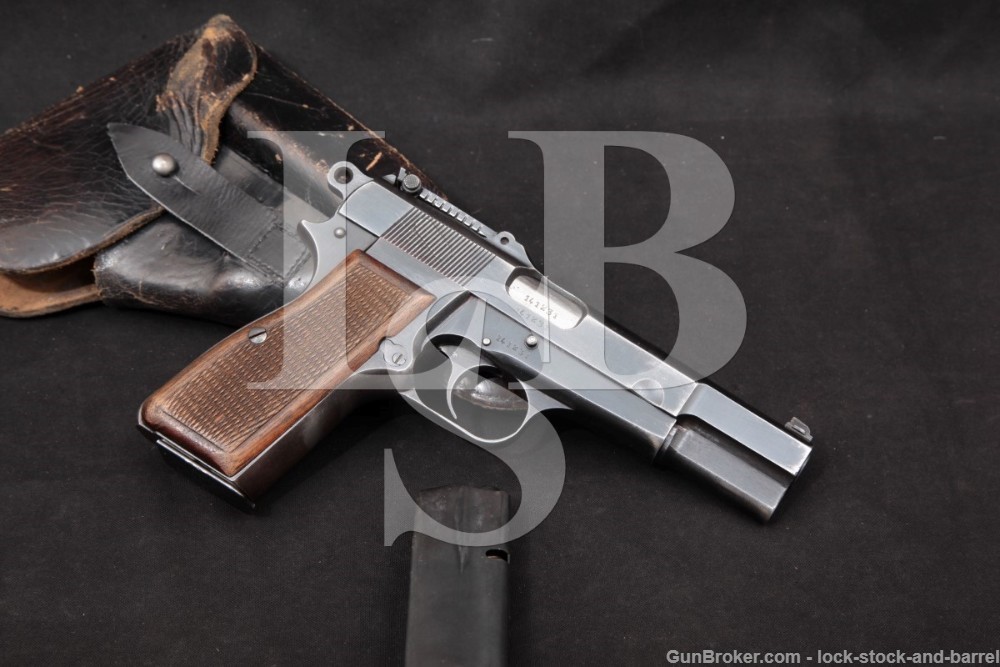 Stock Configuration & Condition: The grips are two-piece checkered walnut. The grips show some wear around the edges of the checkering, minor discoloration from age and oil, and some scattered light nicks and nicks and scuffs. The checkering is generally well defined. There are no chips or cracks. Overall, the grips are in about Very Good condition.

Bore Condition: The bore is dark with well defined rifling. There is light-moderate erosion throughout the bore.

Overall Condition: This pistol retains about 75% of its metal finish. The finish is thinning at all edges. There is handling wear in the grip straps and trigger guard with a few other patches of finish wear, most notable on the left-front of the slide. There are several scattered light nicks, scuffs and scratches. There is some scattered minor surface oxidation, most in the worn areas. The screw heads are sharp. The markings are generally clear, some of the inspection marks are poorly struck. Overall, this pistol is in about Fair-Good condition (see Mechanics).

Mechanics: There appears to be an issue with the magazine disconnect and/or sear. The trigger only trips the sear when pulled with great force when one of the magazines is inserted. It operates better with the other magazine, but still requires excessive force. We experimented with a few other Hi Power magazines and experienced the same issue. Otherwise, the action functions correctly. The slide has little play to the frame. We have not fired this pistol. As with all used firearms, a thorough cleaning may be necessary to meet your maintenance standards.

Box, Paperwork & Accessories: This pistol comes with a black leather flap holster and a total of two 13-round magazines. The holster is marked “ftc / 1942” and with eagle over “WaA182” (Frost & Jahnel, Breslau, Czechoslovakia). The holster shows scattered wear, heaviest where the flap hangs over the magazine pouch and at the front edge of the flap. The stitching is intact. Overall, the holster is in about Good condition. The magazines show light operational wear, intact feed lips and strong springs, in about Fine condition as not original to the gun. Please note, no magazine will be included for purchasers who reside where they cannot be transferred.

Our Assessment: The Browning High Power pistol is based on a design by American firearms inventor John Browning, and completed by Dieudonné Saive at Fabrique Nationale. Browning died in 1926, several years before the design was finalized. The Hi-Power is one of the most widely utilized military pistols in history, having been used by the armed forces of over 50 countries. The Hi Power name didn’t refer to the cartridge, but to its 13 round magazine, holding five more than the Luger and six more than the Colt 1911. Its high magazine capacity and ergonomic grip frame have made it a favorite among civilian shooters as a carry pistol and for home defense. The High Power was adopted by the Belgian military and the early pistols were equipped with a tangent rear sight and a grip that was slotted for a wooden stock. When Germany invaded Belgium, they took over the FN plant and continued making the High Power, but soon dropped the grooved grip after stocks of pre-invasion parts were used-up. Guns made with tangent sights included WaA613, WaA103 and WaA140 inspection marks before the tangent sights were replaced with fixed sights to help increase production. This pistol was made in 1942 in the WaA140 inspection mark range. The pistol has matching serial numbers on the barrel, slide and frame and the inspection marks and proofs are proper for this configuration and serial range. The pistol is in about Fair-Good condition with 75% of its finish remaining. The bore is dark with well defined rifling and erosion throughout. There is an issue with the magazine disconnect and/or sear which should be addressed, and the pistol should be inspected prior to firing in any case. According to Anthony Vanderlinden in his book “FN Browning Pistols”, sabotage performed by the workers in the FN factory increased proportionally with the portion which was forced labor. This was most prevalent in the WaA140 inspection range and some pistols are not safe to fire due to having poor heat treat or being out of tolerance standards. The pistol comes with a black leather top flap holster made in Czechoslovakia in 1942 and with two modern magazines. This will make a nice addition to a Hi Power or WWII small arms collection. Please see our photos and good luck!