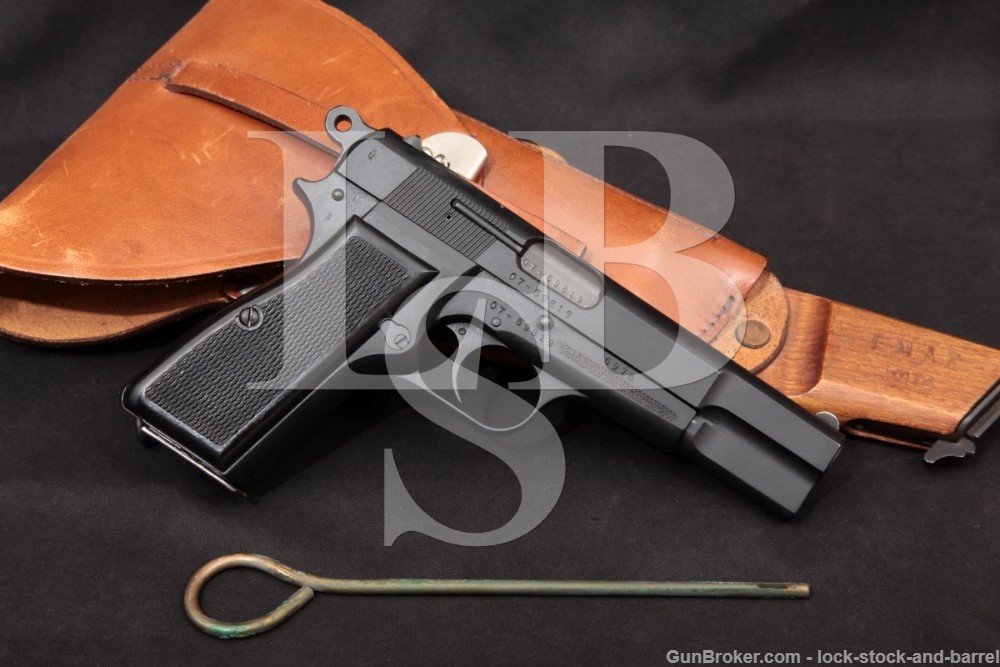 Year of Manufacture: Ca. 1974 (our research indicates that the Chilean contract was approved in 1974 and cancelled shortly thereafter)

Markings: The left side of the slide is marked “FABRICA MILITAR DE ARMAS PORTATILES “DM” ROSARIO / D.G.F.M.”, “LICENCIA FN-BROWNING”, “INDUSTRIA ARGENTINA”, the right is marked with “* / U” behind the slide serrations. The right of the barrel, slide and frame are each marked “07-59819”. The right of the frame is marked “* / F” behind the grip, “5978” on the dust cover, and there is another marking on the dust cover which has been obscured with knurling. Our research indicates that the marking was originally “CARABINEROS DE CHILE”. The right of the frame at the bottom, under the grip panel, is import marked “CENTURY ARMS INC / ST ALBANS VT”.

Sights / Optics: The front sight is a half-round blade fixed to the front of the slide. The rear sight is a flat-topped “U” notch that is dovetailed into the rear of the slide.

Stock Configuration & Condition: The grips are two-piece checkered black plastic panels. The left panel is cut out at the bottom-rear for a lanyard ring on the frame. The grips show minor handling wear with a few scattered light marks. The checkering is well defined. There are no chips or cracks. Overall, the grips are in about Fine condition.

Overall Condition: This pistol retains about 96% of its metal finish. The majority of the balance is in the knurling which obscures the marking on the right of the dust cover, which was applied through the finish. There are a few other scattered light rubs and scuffs, but little through the finish. The action has minor operational wear. The slot for the stock-holster has light use-wear (please note, it is not legal to install the stock on this pistol). The screw heads are sharp and the markings are clear, other than the intentionally obscured mark. Overall, this pistol is in about Fine condition.

Mechanics: The action functions correctly. It has a frame mounted safety and the round hammer has a half cock safety position. This pistol still has a functioning magazine disconnect and the trigger pull is crisp. The slide has minor play on the frame. We have not fired this pistol. As with all used firearms, a thorough cleaning may be necessary to meet your maintenance standards.

Box, Paperwork & Accessories: This pistol comes with a single 13-round magazine, a leather and wood stock-holster and a brass cleaning rod. The magazine has light operational wear with intact feed lips and a strong spring, in about Very Good-plus condition. The stock is marked “F.M.A.P. / 5978” on the right near the mounting bracket. The holster portion shows scattered light wear, most notable on the flap. The wood stock portion shows a few scattered light nicks and scratches with no chips or cracks. Overall, the stock-holster is in about Very Good-plus condition. Please note, no magazine will be included for purchasers who reside where it cannot be legally transferred, it is not legal to install the stock on the pistol.

Our Assessment: This is a licensed copy of a Browning Hi-Power that was made in Argentina. Unlike other Hi Power clones, Argentina actually reached an agreement with Fabrique Nationale to produce pistols under license, an exact copy with parts interchanging. The pistols were made both for the police and military forces of Argentina, but also for export. While many were exported to the United States for commercial sales, there was a contract to produce the pistols for the Carabineros de Chile, Chile’s national police. It appears that this contract was cancelled very quickly with few or no pistols actually delivered. The pistols which had been made but not delivered had the Chilean markings obscured with knurling and then were exported for the regular commercial market. This example is in Fine condition with most of the finish loss coming from the removal of the marking. It is also nice that the import mark was discreetly placed under the right panel, so it won’t show when the pistol is displayed. This will make a great addition to any collection and could still serve as a great shooter, today. Please see our photos and good luck!