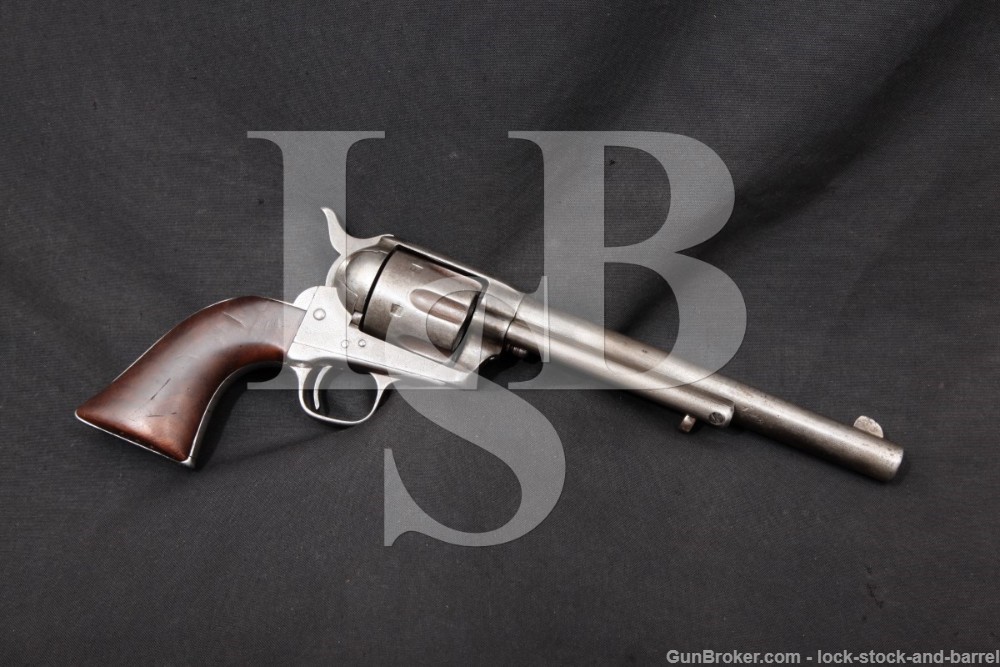 Markings: The top of the barrel is marked “+COLT’S PT. F. A. MFG. Co. HARTFORD. CT. U.S.A.+”, the underside is marked with a very faint “P” and stronger “416”. The bottom of the frame at the front, the bottom of the trigger guard at the front and the butt are each marked “416”. There are small “A” inspection marks behind the trigger guard serial-marking, at the top of the backstrap behind the hammer and on the outside of the cylinder, the marking on the backstrap is faint and the marking on the cylinder is very faint. The outside of the cylinder is also marked “416”, the rear face has an “H” stamp. The hammer slot is marked “C”. The left of the frame is marked “PAT. SEPT. 19. 1871 / PAT. JULY. 2. 1872” and “U.S.”.

Stock Configuration & Condition: The grip is a one-piece smooth walnut. The grip has scattered nicks, dings, bruises, scuffs and scratches including notable impact marks on the bottom faces. There are no cracks. Overall, the grip is in about Very Good condition as Antique.

Finish Originality: There are hints of cold-blue touch-up in the distant past.

Bore Condition: The bore is dark. The rifling is worn, but visible. There is light-moderate erosion and light pitting scattered through the bore.

Overall Condition: This revolver retains about 0% of its metal finish. The surfaces are worn to white with a light patina. There is some scattered minor surface erosion with more notable erosion toward the muzzle-end of the barrel. The grip straps have a series of scratches which may have been intentionally applied. There are some other scattered more minor scratches, nicks, scuffs and tool marks around some screw heads. The screw heads range from lightly tool marked with strong slots to disfigured with useable slots. The markings range from clear to nearly worn away. Overall, this revolver is in about Good-plus condition as Antique.

Mechanics: The action functions correctly. The trigger is crisp. The early-style mainspring (no roller notch) is still strong. The cylinder locks with moderate play on each chamber. We have not fired this handgun. As with all used firearms, a thorough cleaning may be necessary to meet your maintenance standards.

Our Assessment: Colt’s Single Action Army is, perhaps more than any other, an iconic American pistol. It was the U.S. issue sidearm for the last two decades of the 19th century, used by pioneers, outlaws and lawmen across the expanding nation, and captivated audiences on the silver screen and television (and still does, today). This U.S. Cavalry model is one of the very earliest from the 1873-1874 Ainsworth Inspected series. Its numbered parts match with the very low serial number of 416 and has proper inspection marks in the metal. Early features of this revolver include a mainspring with no notch for the hammer-roller and an exposed serial marking on the bottom of the barrel, it was also made before the practice of applying assembly numbers to the frame and loading gate was introduced. The revolver was likely issued during the Indian Wars, yet still remains in Good condition with a decent bore for a 145 year old gun which would have seen use with black powder, and surprisingly strong mechanics. It is no surprise that this piece caught the attention of none other than Joe Kiser, the first president of the Colt Collectors Association, remaining in his collection until his passing in 2014, auctioned from his estate in September of that year. This very early Single Action Army will take a prized place in any collection. Please see our photos and good luck!