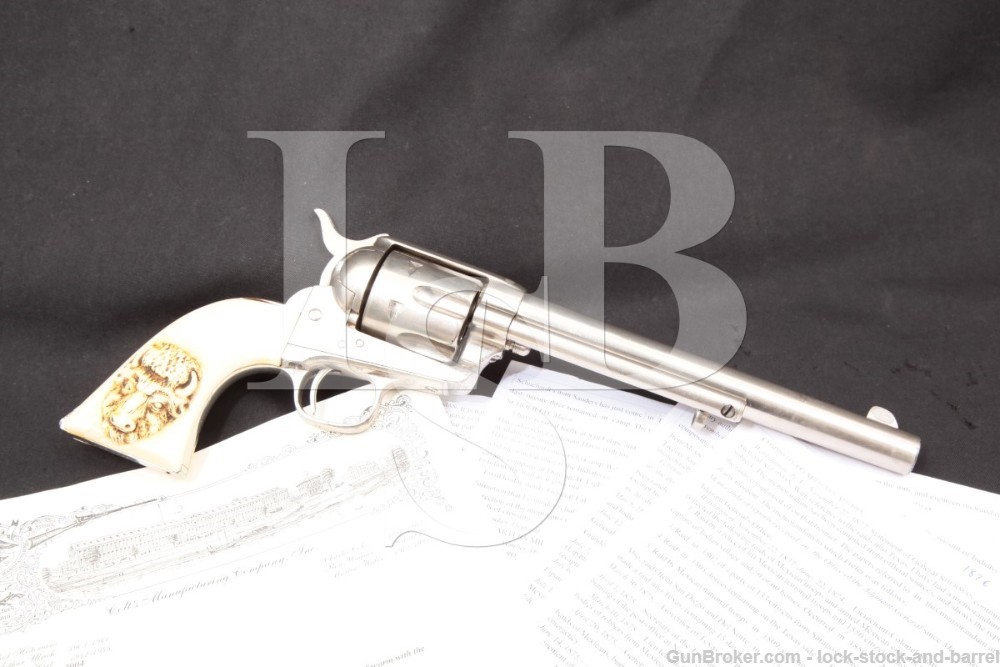 Stock Configuration & Condition: The grip is a one-piece bone with a carved buffalo head on the right. The grip has a few scattered nicks, dings and scuffs with discoloration from age and handling. The buffalo head has good detail. There are some grain lines, but no chips or cracks. Overall, the grip is in about Fine condition as Antique and not original to the gun.

Finish Originality: Refinished, likely at the time of inscription.

Bore Condition: The bore is semi-bright with well defined rifling. There is some light erosion and infrequent minor pitting in the bore, most at the muzzle-end.

Overall Condition: This revolver retains about 90% of its current metal finish. There is some finish loss at edges with a spot of more notable loss on the bottom-left of the barrel above the “bullseye” ejector rod tab. The areas of finish loss show discoloration from oxidation. There are several scattered minor nicks, scuffs and scratches in but not through the finish with a few more notable nicks in the backstrap and some tool marks around the head of the cylinder pin. The screw heads are generally sharp or tool marked with strong slots. The cylinder pin retaining screw is disfigured with a useable slot. The markings range from clear to shallow and faint, the inscriptions are clear with factory markings showing more wear. Overall, this revolver is in about Excellent condition as refinished Antique.

Mechanics: The action functions correctly. The trigger is crisp. The cylinder locks with very little play on each chamber. The cylinder bushing is removable, but is fairly tight to the cylinder. We have not fired this handgun. As with all used firearms, a thorough cleaning may be necessary to meet your maintenance standards.

Box, Paperwork & Accessories: This revolver comes with a Colt Historian letter showing this revolver as shipping to H&D Folsom Arms Company in New York, New York on December 31, 1875 in a shipment of 17 same type guns. Also included is a printout of House Committee on Military Affairs records dated November 22, 1877 from a hearing on “Texas Border Troubles” which contains a list of raids into Texas spanning from 1850-1877. Many of the listed incidents occurred in the vicinity of Rio Grande City, Texas.

Our Assessment: Colt’s Single Action Army is, perhaps more than any other, an iconic American pistol. It was the U.S. issue sidearm for the last two decades of the 19th century, used by pioneers, outlaws and lawmen across the expanding nation, and captivated audiences on the silver screen and television (and still does, today). This example is not only beautiful with its nickel finish and carved bone grip, but it is inscribed to a man whose name was unfortunately only initialed, F. P. de L. While we were not able to find a matching name, the inscription also includes Mexico City, Tx and date May 27, 1876. This places the revolver in both time and place close to the center of the Texas Border Troubles of the mid-late 19th century when there were a series of raids by Mexican militia, regular troops, and Indian tribes stealing livestock and other goods. This revolver was inscribed and dated just 6 months after the “Las Cuevas War”, a famous event in the history of the Texas Rangers in which Captain Leander McNelly led a force of Rangers across the border in pursuit of cattle thieves. Most famously, on being advised to return to Texas by a U.S. Army Colonel, McNelly replied “The answer is no.” and when his return was demanded by the Secretary of War, the reply included “Give my compliments to the Secretary of War and tell him and his United States soldiers to go to hell. Signed, Lee H. McNelly, commanding.”. The day before the final confrontation of McNelly’s battle, he pulled his men back to Rio Grande City to rest. The following day more than 400 cattle were returned across the border (though only 250 had been expected) and they displayed brands from nearly every ranch in the Nueces Strip. While all Single Action Army revolvers of this period are collectible, the events of the time and place surrounding this revolver make for a wonderful piece to add to a collection. Please see our photos and good luck!